I was recently asked to look at the Perverted Faculty Argument (PFA) by Ficino, here at ATP. It is not something I have spent much time looking at, though I remember arguing against this with Peter D. Williams, in terms of Natural Law, in a train on the way back from BBC’s The Big Questions a few years back.

Let’s lay some groundwork so that everyone reading can access this piece. In this piece I will look at Natural Law Theory before going on to criticise its application more directly in the PFA.

What is Natural Law?

Natural Law Theory in ethics is a moral and legal philosophy that was promoted by the likes of Thomas Aquinas. There are many aspects and interpretations of natural law, including in the are of jurisprudence, but I want to concentrate on a narrow, quite physiological, application.

As the IEP states:

Here, natural law (NL) for humans is the way that humans participate in God’s eternal law. In more recent times, and under Catholic influence, NL has morphed into something else, particularly within the confines of sexual preference and activity. Encyclopedia.com states:

Over the past three decades natural-law debate has focused upon the encyclical Humanae vitae (1968), which condemned contraception as a violation of the natural law, not because it is artificial but because it is contrary to nature.

This idea of “natural” pertaining to teleological ideals (i.e. that body parts have purposeful functions) leads to severe ramifications when considering the sexual domain. As the IEP states in another article:

Based upon a comparison of the sexuality of humans and the sexuality of lower animals (mammals, in particular), Aquinas concludes that what is natural in human sexuality is the impulse to engage in heterosexual coitus. Heterosexual coitus is the mechanism designed by the Christian God to insure the preservation of animal species, including humans, and hence engaging in this activity is the primary natural expression of human sexual nature. Further, this God designed each of the parts of the human body to carry out specific functions, and on Aquinas’s view God designed the male penis to implant sperm into the female’s vagina for the purpose of effecting procreation. It follows, for Aquinas, that depositing the sperm elsewhere than inside a human female’s vagina is unnatural: it is a violation of God’s design, contrary to the nature of things as established by God. For this reason alone, on Aquinas’s view, such activities are immoral, a grave offense to the sagacious plan of the Almighty.

Sexual intercourse with lower animals (bestiality), sexual activity with members of one’s own sex (homosexuality), and masturbation, for Aquinas, are unnatural sexual acts and are immoral exactly for that reason. If they are committed intentionally, according to one’s will, they deliberately disrupt the natural order of the world as created by God and which God commanded to be respected. (See Summa Theologiae, vol. 43, 2a2ae, qq. 153-154.) In none of these activities is there any possibility of procreation, and the sexual and other organs are used, or misused, for purposes other than that for which they were designed. Although Aquinas does not say so explicitly, but only hints in this direction, it follows from his philosophy of sexuality that fellatio, even when engaged in by heterosexuals, is also perverted and morally wrong. At least in those cases in which orgasm occurs by means of this act, the sperm is not being placed where it should be placed and procreation is therefore not possible. If the penis entering the vagina is the paradigmatic natural act, then any other combination of anatomical connections will be unnatural and hence immoral; for example, the penis, mouth, or fingers entering the anus. Note that Aquinas’s criterion of the natural, that the sexual act must be procreative in form, and hence must involve a penis inserted into a vagina, makes no mention of human psychology. Aquinas’s line of thought yields an anatomical criterion of natural and perverted sex that refers only to bodily organs and what they might accomplish physiologically and to where they are, or are not, put in relation to each other.

So a penis being used for heterosexual sex is good because that is its purpose: you are fulfilling the designed function for the appendage.

Several problems jump out straight away:

Evolution is adaptive. We know this. Things functionally change to the result that we and other animals have vestigial organs, or organs that have been co-opted to another purpose. How does this fit in with a teleological approach? The penis is just another organ no dissimilar to any other organ in the body. It has a function inasmuch as most organs have clear functions that feature in our survivability, but they can be adapted to other behaviours that do not endanger our survivability, or even improve them. It all depends how closely defined the purpose you are talking about actually is. Our hands, from an evolutionary point of view, were not designed to hold a pencil and write. However, our hands could arguably be defined in terms of being “designed” for using tools, into which the former idea fits. And yet, surely they were not “designed” (adapted) to use tools but to hold on to branches for climbing. Could branches, then, be seen as tools? Are we using branches as a means to an end in the same way we use tools?

We see the science of evolution, and it is undeniable (being deniable only to the regrettably ignorant). I don’t want an argument about the truth of evolution here (go read a book or two for that). Natural Law Theories such as employed by Aquinas must fit in with the reality of evolution, then. We can’t shelve observable phenomena and fact in light of a contrived construction of theology.

There are competing purposes here since surely we are designed to hold a rational and emotional relationship with God, and the longer that can go on the better, but sperm should only be shed in the pursuit of procreation…

If rationality (a core component of NL) is being utilised when reasoning exactly how we can use our body for other functions, then who gets to dictate which of these processes wins in a head to head? For example, if I reason that I can use my body for X, but NL prima facie appears to say we shouldn’t use it for X because of Y, then who gets to say Y trumps rationality and not that rationality trumps Y?

Indeed, one of the functions of our minds is to have desires, so having homosexual desires but not acting on them is both unnatural and natural at the same time.

There are countless competing teleological battles for which God has not provided clarity in order to solve the conundrums. Our hands should be used for climbing trees, not writing the Bible for goodness sake!

As with just above, there are many things that humans do that are not, at first look, within the design remit for our natural bodies. I wonder how many humans, and Catholics in particular, do extreme sports, dive, para-chute/glide/ascend and so on and so forth. They are using their bodies in particular ways for which they were never apparently designed. Christians might say: “Well, how do you know God didn’t design the body to be able to do those things too, so that it can have multiple functions that appear natural?” Well, sure, but that can also apply to all the things in the sexual domain, too. It comes down to second-guessing God.

Aquinas and other NL theorists are clearly supposing God’s own teleological designs for humanity, which seem to be based on really prima facie and simplistic ideas of what the functions of our bodies and body parts are. What it looks like is happening is that Aquinas doesn’t like homosexuality, sees it as unnatural, so creates a theology that prohibits it.

It’s worth noting the extensive existence of homosexuality in nature, in other animals.

In the next post, I will look at the PFA in more detail as it pertains to this. 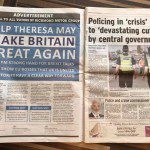 June 10, 2017 American Fascism
Recent Comments
0 | Leave a Comment
Browse Our Archives
get the latest from
A Tippling Philosopher
Sign up for our newsletter
POPULAR AT PATHEOS Nonreligious
1

Christian Strategies Reveal Their Disbelief in...
Roll to Disbelieve
Books by This Author Books by Jonathan M. S. Pearce