Beards and the Perverted Faculty Argument

Here is the third and final part in a series of pieces by regular erudite commenter Ficino (the first part can be found here, the secon here). This series will be looking at Natural Law Theory in its historical context. Over to Ficino:

The Stoic philosophers taught that we attain happiness by living according to nature. Since nature endows the human male with a beard, and woman not (usually), the Stoics took the beard as nature’s signal of maleness and ruled out shaving. Chrysippus (c. 279-206) recounts that Diogenes the Cynic—the famous searcher for an honest man—accosted a shaved man by saying, “surely you don’t bring a charge against nature for making you a man and not a woman?” Chrysippus goes on to block an appeal to custom by noting that men only started shaving at the time of Alexander the Great, though when he names two cities where shaving was illegal, he has to add that no one now obeys those laws (XXVIII fr. 3= Αthenaeus, Sophists at Dinner XIII 565A-D). In Rome of the first century C.E., Musonius Rufus was recorded in Discourse 21 as teaching that the beard is provided by nature and is symbol of the male, like the cock’s crest and lion’s mane. One should remove a burdensome amount of hair but ought not shave the beard, except when there is a disease of the chin. Nature keeps guard more carefully against deficiency than against excess, so it’s common sense to assist nature and cut off some of our hair. Men with fancy haircuts, though, are like women who try to make themselves more beautiful with hairstyles. Men who cut their hair and shave their cheeks want to look like boys, or they’re androgynous and womanish, not real men. They are driven by lust and vanity and just want to look attractive.

This teaching was picked up by Christians. Previously I posted in a combox on Jonathan’s blog that Clement of Alexandria viewed hairiness as sign of maleness. According to Clement, God took something from Adam’s hairless part, the side, and made female nature to serve male. It’s unholy for a man to transgress hairiness, the symbol of male nature (Paedegogus III.3.19.3). The Constitutions of the Holy Apostles, compiled in the fourth century, say, “Nor may men destroy even a hair of their beards and thus against nature change the form of a man” (I.2.10).

As Tertullian does about veils, these thinkers call in nature as an ally for sbeards but do not make a natural law argument explicit. If I may try that for them, I suggest that the wrong-making feature of shaving is that it prevents the male chin and its hair-growing faculty from performing its function—producing a beard. Armchair theorizing might come up with attracting a mate, perhaps also signaling the male’s virile power to rival males, as functions of the beard. As such they serve the larger reproductive function of the male. Since we are by nature social animals, we may think that the beard also marks the male’s status at the top of a gendered social hierarchy. That is the plane on which these thinkers care about beards, as we can see when they associate shaving with other practices of libidinous males who, they say, want to look like boys or women.

If my reframing of the anti-shaving argument is correct, we have in it an instance of a Perverted Faculty Argument. It is not the same as the Wrong Faculty Argument, for guys who shave do not use the wrong body part for growing a beard. It is not a denunciation of failure to repress a Dangerous Faculty. Instead, a theorist using the PFA defines the a good which a natural function is structured to achieve. Then the theorist accuses someone of using the associated faculty – the ability to activate organs to achieve the function – in a way that frustrates the function. I think there are two forms of PFAs: 1) argues that the function is simply blocked entirely; 2) argues that the faculty is diverted to serve some other function, not the function that it is structured by nature to achieve.

Obvious, charged examples in our own time are PFAs against artificial means of birth control and same-sex relations. The natural law theorist defines the function of our “sexual faculty” as getting semen into vagina so as to make a baby. S/he may add that our sexual faculty also has a unitive function: mother and father need to love each other so that they’ll maintain a stable bond for raising children. The PFA argues that any sex act that does not get semen into vagina makes a perverted use of our sexual faculty, aiming not at reproduction (and family) but at something else—usually, it is claimed, pleasure. These are examples of PFA 2). The argument against shaving the chin is a kind of PFA 1). The man who shaves is not accused of using his chin’s hair-growing faculty for the wrong purpose but simply of blocking it from doing its job.

We can think of other PFAs. For example, an argument that anti-perspirants are against nature because they block the scent glands from doing their job (I am not sure what that job is, physiologically – to attract a mate? is it rational to say they have a job?). This is a PFA 1). One commonly sees chewing gum as an example of PFA 2). Gum contains no nutrients, so that the taste buds and salivary glands do not serve the function to which their operation is tied by nature, sc. nutrition, but instead are diverted to serve the wrong function, pleasure of taste. The triviality of such examples is meant to cast doubt on the PFA’s premise that if a faculty does not achieve the proper natural function, the act is an objective wrong. The natural law theorist may dismiss these examples because they don’t concern our rational functions and thus, do not affect overall goodness of a human life. Their logic is PFA, though: an act’s purported objective structure, from beginning to the proper end in the proper function, breaks down, so that the faculty is blocked or diverted from that function. By PFA, this should be a wrong, because it is the contrary of achieving the natural good, which is right.

Does the Perverted Faculty Argument succeed at the tasks to which its contemporary exponents put it? That is controversial, for the PFA has features that seem to be defeaters: e.g. apparently question-begging premises, unsophisticated scientific and historical grounding, and the challenge posed by “Yeah, so?” responses. This question deserves its own dedicated treatment. 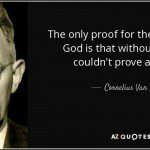 July 21, 2017
The problem of induction, and possibly deduction, too
Next Post

July 23, 2017 On Harmonising Biblical Contradictions
Recent Comments
0 | Leave a Comment
Browse Our Archives
get the latest from
A Tippling Philosopher
Sign up for our newsletter
POPULAR AT PATHEOS Nonreligious
1