We’re All Slaves To Luck, And That’s Okay

I have recently been introduced to the idea of moral luck by my friend Aaron Rabinowitz (host of the excellent fatalist philosophy podcast Embrace the Void). This idea was first proposed in an essay by Thomas Nagel in 1979, where he arrives at the conclusion that our moral triumphs and failures can ultimately come down to luck instead of our own agency. This will resonate particularly strongly with those of us who reject free will, since our actions are ultimately the result of deterministic brain function (with a little room for quantum indeterminacy that is still outside of our control).

Nagel outlines four different components of luck that can affect how our moral actions can be assessed:

All these factors combined ultimately influence all our behavior as well as the moral outcomes of our behavior. We can never truly judge the moral fortitude of someone based on their actions due to these flavors of moral luck, since the moral outcomes of these actions, at a fundamental level, come down entirely to circumstance. For an in-depth exploration of the concept I encourage everyone to read the paper linked above; it is not terribly dense to a philosophy outsider like myself and full of interesting examples. I thought a brief overview would be of particular interest to this audience, especially since topics like free will are common here.

Let me first dive into constitutive luck, which focuses essentially on our personality and preferences, which is ultimately tied to our brain function. While our predispositions and inclinations can certainly be shaped by lived experiences (one may have a traumatic experience with a dog as a child, for example, and avoid dogs for the rest of their life), our genetic makeup plays a lot into this. If you consider both genetic and epigenetic factors, you can easily see how your personality is shaped by circumstances. All it takes is one sperm/egg cell with a different chromosomal combination, or some sort of mutation, and one’s personality can become drastically different. Each sperm cell, for example, carries half of our 46 chromosomes, and therefore the genes that made up the sperm that formed us had a 1/2^23 chance of having that specific combination (not counting mutations or other factors).

What’s more, what’s the probability that the two parents that made you happened to meet up? There are an effectively uncountable number of factors involved. Your parents easily affect both constitutive luck and circumstantial luck. How they raise you affects your personality: if they raise you with strong morals and ethical foundations than you are more likely to act accordingly. At the same time, if they are abusive to you then such trauma can affect the rest of your life, from CPTSD-related behavior to difficulty maintaining interpersonal relationships. Your parents also affect your circumstantial luck by being the overwhelmingly largest factor in deciding the environment you are raised in. The wealth of your household is also the largest factor that will determine your income later in life. Where your parents decide to raise you will also determine what opportunities are available for education, mentorship, jobs, and hobbies.

Unlike the previous two forms of luck, resultant luck is likely to be more intuitive to readers, especially those who don’t accept a deterministic universe lacking free will. This type of luck is relevant to our moral assessments of someone’s actions, as we are more likely to make moral judgements upon people based on the way the situation plays out, often in spite of their original intentions. Nagel brings up the idea of a reckless driver in the abstract. While we condemn reckless driving in general, we tend to have different degrees of moral judgment depending on where that reckless driving leads. If someone is not paying attention to the road, they may swerve near us, and we as another driver might be led towards nothing much more than exasperated agitation or anger as a result. In the same situation, but one where a child happens to run into the road, this can lead to the child being struck. Our moral judgment is ultimately going to be much harsher on the driver in the latter situation due to the much worse outcome, even though the behavior of the reckless driver is the same.

Resultant luck also plays into the outcomes of behavior with positive intentions. Nagel brings up violent revolution as an example of someone attempting to create positive change through actions that require some risk. The American Revolution was a violent and bloody affair, yet since Washington was successful in driving the Britains away from American soil and helping the colonies escape British tyranny, he is seen as a hero. However, were the Americans unsuccessful in the revolution, then Washington and his armies would largely be seen as terrorists inducing unnecessary bloodshed and violence. While there is a component of winners writing history here, we also have to recognize the underlying principles. If a revolution is seeking liberation for those involved and requires bloodshed to do so, then any failed revolution is simply an act of bloodshed without the desired outcome. As a result, we would likely judge Washington as an immoral character.

When it comes down to it, everything from our fundamental makeup to how we behave comes down to circumstance. There is literally nothing between the intentions behind our actions, the actions themselves, and the results that doesn’t come down to some degree of luck. It very much relates to the saying, “there but for the grace of god go I”, where we recognize that we could easily be undergoing misfortune or judgment if we simply happened to have different life circumstances. We wouldn’t attribute any providence to the divine as the original saying implies, but we can recognize that we could easily be in a much worse situation due to poor luck.

This is often criticized as removing accountability from agents that enact harm on other people, a common criticism of determinism in general. I would push back upon this and say it simply illustrates a more accurate picture of the world we exist in. None of us are capable of “choosing otherwise” as libertarian free will implies, we are simply functions of neurons that we had no say in constructing, and the neurons are simply reacting to an environment we have never had any control over from the time we are born onward.

I would also push back on the idea that such a worldview means that we can’t hold others accountable. All this model states is that our behavior is a product of our genetics and our environment (which is a fairly non-radical concept). Therefore, it would behoove us to construct an environment that leads the most people to make the most moral decisions. Crime and violence is often a result of poverty and being trapped in a system with no easy pathway towards a fulfilling life, and therefore it behooves us to create environments that allow everyone as much access to society as possible. Retribution towards crime in and of itself holds no value, simply because we as agents weren’t as “responsible” for those actions as libertarian free will leads us to believe. Therefore even if someone does monstrously immoral, our best course of action is to focus on preventing the harm from occurring again rather than punishing the actor. There is value in isolating a violent criminal from the general public, but we should also put effort into helping this person be reformed, which will promote well-being for this person as well as society should they be able to contribute again in the future. Many shake their heads as if this is “rewarding” bad behavior, but it simply sets up an environment most conducive to moral behavior by skewing the luck-based outcome distribution in a more positive direction.

This also has the added effect of allowing us to become more at peace with the universe around us and the actions of those who cause us harm. Once we recognize that everyone around us is simply the product of a chaotic universe, then we can move away from seeing individuals as monsters rather than pieces of the universe that happen to be doing monstrous things. With that, we can build empathy for those who have wronged us or for those who harm others, which allows us more productive behavior in the future. While I hold great disdain for Donald Trump, I recognize that he is a product of how he is raised just like everyone else, and being raised by a highly masculine and competitive real estate mogul who was likely too busy to pay attention to his offspring likely was not a positive factor towards Donald’s personality. This does not prevent me at all from participating in resistance-based activism against his administration, since my actions in resistance are still capable of helping produce positive outcomes and promote well-being.

It’s important to note that I am not saying it is bad to feel certain negative emotions like anger or sadness at someone wronging us (after all, under this model we have no choice but to feel like this anyway). Our emotions are valid and it’s perfectly ok to be justifiably upset at someone who has enacted harm upon us. However, we can temper these negative emotions such that we ourselves do not act out in unrestrained or possibly violent manners in ways that will produce even more harm, and hopefully the end result is a situation where we are less anxious and upset with the world. This will be better for our own mental health, as well as the well-being of those around us. We can recognize that the harm that is coming to us is not just the result of evil or exploitative people, but on a more basic level a random and uncaring universe, and also focus on the things we are capable of changing within that universe.

Again, I would suggest those who find this interesting read the original paper, which won’t take too long to get through. Hopefully, realizing that the entirety of our behavior is simply the product of a chaotic, unpredictable universe allows for a better understanding of why people behave the way they do, and help us create environments that influence our behavior in a more positive way. 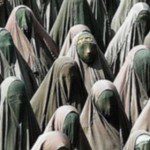 August 5, 2017
Only the Truth Will Prevent Harm
Next Post

August 9, 2017 This World as Philosophically Necessary
Recent Comments
0 | Leave a Comment
Browse Our Archives
get the latest from
A Tippling Philosopher
Sign up for our newsletter
POPULAR AT PATHEOS Nonreligious
1

Rudy Giuliani Is Now A 'Hair Grow In...
Rudolph William Louis Giuliani has known life's ups and downs. The 76-year-old...
view all Nonreligious blogs
What Are Your Thoughts?leave a comment
Copyright 2008-2021, Patheos. All rights reserved.
error: Content is protected !!