From an admitted liberal such as myself, the news of Republican stalwarts Bob Corker and Jeff Flake roasting Trump in public should be met with joy. They have both right royally slammed Trump yesterday and recently, and this adds to the words of George W. Bush who took some unnamed swipes at Trump where the message was crystal clear. Some choice quotes from the two, and John McCain to boot, include:

The problem is, this is reflective of something larger and thoroughly problematic going on with the GOP. Steve Bannon, the insidious reaper behind so much of what has gone on in the White House, is gleeful in announcing “another scalp!”

It’s all going dangerously to plan for the likes of the new hard right in American politics, in the GOP – a party being slowly restyled. Out with the old moderate conservatives, often predominantly fiscally so, and in with the new, harder, more socially conservative staunch right-wingers.

Centrism is on the wane both sides of the Atlantic, it seems. In a world of identity politics, we move ever more to the extremes. And this does not bode well for the traditional position of many of the Republican old guard. What is happening appears to be exactly what the likes of Steve Bannon have been wanting.

Bannon himself, back at Breitbart, is commanding packed Republican audiences in talks. He’s hot stuff. People seem to love to hate, and Bannon can sell that ideological rhetoric to the hungry masses, fuelled by Trump’s everlasting campaign (that seems to go on well after the election has been and gone). As the Guardian reported of a recent speech:

The former White House chief strategist Steve Bannon has launched a scathing attack on George W Bush, portraying him as a buffoon whose presidency was as “destructive” as any in American history.

Bannon was responding to a speech this week in which the 43rd president denounced bigotry in the Donald Trump era and warned that the rise of “nativism”, isolationism and conspiracy theories have clouded the nation’s true identity.

Speaking to a capacity crowd at a California Republican party convention on Friday night, Bannon said: “He embarrassed himself. The speechwriter wrote a highfalutin speech. It’s clear he didn’t understand anything he was talking about … He has no earthly idea whether he’s coming or going, just like it was when he was president of the United States.”

The executive chairman of Breitbart News went on to apologise to any “Bush folks” in the audience before asserting: “There has not been a more destructive presidency than George Bush’s.”

This split might be seen to bode well for the Democrats, who seem to be impotently watching from the side, but it is perhaps not so great. We really could be seeing a zeitgeist in US politics where the hard right is becoming normalised and effectively, merely “the right”. As the Guardian continued:

But the duelling speeches demonstrate a worsening split within the Republican party. Bannon’s remarks in Anaheim came during an address thick with attacks on the Washington status quo, echoing his call for an “open revolt” against establishment Republicans before next year’s midterm elections. He called the “permanent political class” one of the great dangers faced by the country….

Bannon also took aim at the Silicon Valley and its “lords of technology”, predicting that tech leaders and progressives in the state would try to secede from the union in 10 to 15 years. He called the threat to break up the nation a “living problem”.

The GOP needs desperately to settle on a course, a heading for the next decade. Will it favour the old-school moderate position (I m hugely simplifying here, as there has always been a spectrum), or will the new harder, more conservative right win through? What remains to be seen is whether many working class, and lower-middle class, newly politicised voters have been taken in by such rhetoric and are still standing strong behind Trump…? There are confusing surveys and articles concerning this.

The Washington Post yesterday ran this: “The GOP base doesn’t really love Trump. This poll shows it.“

Whereas Express News Fox ran this: “Insights On The Current Support For Donald Trump: Donald Trump’s support among Republicans as a group in general is much higher than that of the Republican leadership.“

They pit these claims:

These numbers tell the story of Trump’s current support quite clearly. As we noted in a blog in August of 2016 before the election, “Trump supporters are of two principal types: right wing populists and Republican diehards.”

The “diehards” are sticking with Trump but to a lesser degree than the “right wing populists” who have an almost orgasmic devotion to the President. Writing for the Atlantic, David Graham observes, “Every shrewd politician keeps a watchful eye on his base but the relationship between President Trump and his core supporters has become an object of near fetishistic obsession.”…

One need only look at the attendance at his campaign style rallies since becoming President to see that is an accurate characterization. For a more statistical confirmation, consider that President Trump’s job performance approval ratings in the WSJ/NBC poll for September went up to 49 percent compared to 42 percent in August.

According to Dante Chinni and Sally Bronston, “Trump’s job approval number among men without a college degree was 55 percent. That was up 11 points from August when 44 percent of that same group approved of his job performance. That group made up the bulk of Trump’s September improvement.”

While Trump’s popularity with his base is overwhelming, his status and impact on what we have labeled the “Republican diehards” is even more intriguing and revelatory. In the September Quinnipiac poll, 59 percent strongly approved of the “way Donald Trump is handling his job as president.” A new CNN poll conducted by SSRS shows that 83 percent of Republicans feel Trump is “taking the Republican Party in the right direction.”

Trump’s high percentages on these and other items in those two polls are indicators that Trump support among Republicans substantially transcends his base of core supporters. They become especially telling when contrasted to the results for the Republican leadership in the same two polls.

The  landscape is confusing depending upon which segment of the demographic you are looking at.

This internal war is being played out in Arizona, as fivethirtyeight point out:

The Senate primary in Arizona is still a year away, but the race has captured more than its share of attention; the Washington Post called it a “proxy war” between the president and the GOP establishment. The theory goes that a Ward win would be an assertion of Trump’s power against the establishment, another notch in the belt for the Trumpification of the party — more economic nationalism and an anti-immigrant bent. That this win could come in the home state of conservative legend Barry Goldwater is something like poetic irony.

Those in the Arizona Republican establishment scoff at this notion, noting that primaries in the state have often entertained an antiestablishment element — the state has a long tradition of populism and libertarianism. Arizona is being Arizona, the establishment argues, and the rest of the country needs to stop projecting its anxieties onto the state.

But Ward is betting that something in Arizona has shifted, that the rise of Trump has emboldened an antiestablishment message and will allow her to wrest Flake’s seat from him. She thinks she’s being discounted by the same forces who didn’t see Trump coming, and that the GOP establishment is in for another rude awakening. “I think I have the heart and soul of the Republican Party,” she told me.

There is a war being played out, but those of us on the outside looking in should not automatically be gleeful. Better the devil you know, then the beast that makes the devil look like Bambi.

I fondly remember the days of that jolly nice man, George W. Bush… He seems so…moderate. 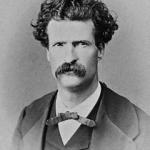 October 26, 2017 A Pen Warmed Up In Hell
Recent Comments
0 | Leave a Comment
Browse Our Archives
get the latest from
A Tippling Philosopher
Sign up for our newsletter
POPULAR AT PATHEOS Nonreligious
1