Before the Big Bang: The No Boundary Proposal

Before the Big Bang: The No Boundary Proposal November 10, 2017 Jonathan MS Pearce

Here is the latest addition to the skydivephil YouTube series exploring competing models for the origin of the universe. It is just out and features an exclusive interview with Stephen Hawking, James Hartle and Thomas Hertog. The film aims to explain their No Boundary model of quantum cosmology to those who are not specialists in the field but are interested in early universe cosmology.

In the film, Hawking discussed his new work which has not yet been published in a journal.

Although the film is about the science of the early universe, there are some moments that touch on some issues that have been raised in atheists/theist debates regarding cosmology. For example, some theists have claimed that as inflation generates a multiverse and inflation needs fine tuning then the multiverse doesn’t solve fine tuning. However, the scientists in the video claim that inflation does not need fine tuning in The No Boundary Proposal. Another issue is that apologists like William Lane Craig claim that necessity is ruled out by physicists as a possible explanation for the constants of nature. But again, this is denied by the scientists in the video. Boltzman brains are also discussed and yet again the apologists’ view is contradicted. Stephen finishes with a nice quote about why the universe does not need an intelligent creator.

If you are interested in my latest book on the philosophy concerning the start of the universe, please check it out: 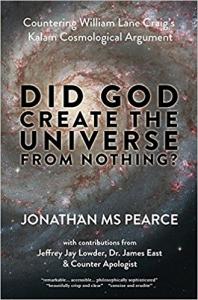 November 10, 2017
The Causes of Human Behavior - Good and Bad
Next Post

November 10, 2017 Faith as a Source of Self-Esteem... sometimes
Recent Comments
0 | Leave a Comment
Browse Our Archives
get the latest updates from
A Tippling Philosopher
and the Patheos
Nonreligious
Channel
POPULAR AT PATHEOS Nonreligious
1

Exposed: the evangelist who was assaulted...
The Freethinker
Books by This Author Books by Jonathan M. S. Pearce