Not Seeing God through Celebrations in Life 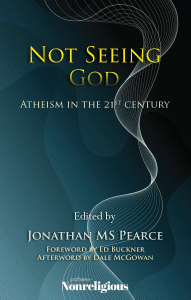 Galen Broaddus, of Across Rivers Wide, here at Patheos, contributed a chapter to the recent book Not Seeing God: Atheism in the 21st Century. In his piece, he alludes to the human proclivity for ritual and celebration. As a humanist celebrant, he is tapping into this and supplying the demand for such within an atheistic paradigm.

Part of his chapter is here excerpted:

In January of 2017, I got to experience something that not a great number of people get to experience: I saw a decision come down in a federal lawsuit, finding a state statute to be unconstitutional, with my name on it as a plaintiff.

The lawsuit, which was brought by myself and the Center for Inquiry (CFI), directly challenged the marriage statute of my home state of Illinois, which gave the legal authority to solemnize marriages to select classes of individuals, most notably judges and religious officiants―but not secular celebrants wholly unaffiliated with any religious organization. CFI, as a non-religious organization certifying celebrants, and myself, as a CFI-certified secular celebrant, brought the suit in order to secure the same right for secular celebrants, and fortunately we were able to prevail in federal district court.

Despite my confidence that the court would see reason on this point, given that we were merely asking for equal treatment under the law, I found myself afterwards reflecting on just how strange it was that, only a mere five years after casting off religion in my own life, I would be in a place where I would not only be serving in such a role as a secular celebrant but actively advocating for it.

How Religion Helped Me See the Importance of Ceremony

It was five years ago, as of the time of this writing, that I had a moment of clarity where I realized that a long period of reflection, deep intellectual study, and engagement with atheists on the Internet had led me to reject the religious beliefs I had been taught during my childhood as the son of a Baptist minister in rural Illinois. Because I had spent a substantial amount of time engaging with the ideas of atheism and freethought generally, I had some foundations on which to land when I finally hit this realization, which cushioned my “fall from grace” a little.

That childhood did leave a number of indelible marks on me, of course, some of which I have had to learn to cope with and retrain my thoughts to eliminate. Not all of those experiences left me wishing that I could have been spared that exposure, though.

As a PK―a “preacher’s kid,” although the nomenclature is somewhat flexible―I had a front row seat for virtually all of the facets of the life of the many Baptist churches my father ministered in, from my infancy through my teen years. Although we would have never dared to couch them in terms of “sacraments,” that dirty Catholic word, there were of course many regular rituals that were part and parcel of the religious community of the church. The most significant, naturally, was baptism, a rite performed by immersion on any individual who could demonstrate an understanding of the basic doctrines of Christianity and a procedure that would signal that individual’s full entrance not only into the fold of Christendom but also into the full life of the church community as well.

I remember well the feeling of seeing individuals―often children, but also frequently adults―stepping into a baptistery, answering a few questions from the minister to confirm their full understanding of the rite itself, and then, “in the name of the Father and the Son and the Holy Spirit,” being dunked and coming up to exclamations of delight from the congregation. (Indeed, I remember my own baptism at the age of eleven and how ecstatic that feeling of validation and acceptance was.)

This is not to say that I was successfully indoctrinated to be a full-fledged believer in the rightness of ritual. There were plenty of ritualistic elements of my upbringing that I recoiled from or even rebelled against, such as the ways that these evangelical churches would force displays of patriotism into religious contexts. (Pledging allegiance to the US flag, the Christian flag, and the Bible in succession during Vacation Bible School every summer always struck me as very odd.) But these rites did instill in me the conviction that ceremony had a function and a role in the lives of individuals and communities.

As I grew older, I began to have more of a personal role in some of these functions as a musician. It was here that I first began my involvement with the most ubiquitous ceremonies of life: weddings and funerals. I started playing piano when I was around four years old, and I was playing hymns in church essentially as soon as I was musically conversant enough to handle them. Music would eventually become my primary involvement in churches, but outside the regular activities of church life, beyond the Sundays and Wednesdays, family and church members had needs for a pianist.

It was here that I really recognized what ceremony could do: It could bring together a group of people for the celebration of a milestone of life, whether that was the celebration of a new union or a life lived or the entry of a member into a community (as with baptism). Having grown up with a father who facilitated these ceremonies as part of his pastoral duties, I now found myself fascinated by my own ability to help make them possible, to play a vital role in marking these moments of life.

So it didn’t take me long, once I found myself on the outside of religion and its own particular ceremonial turns, to consider the inevitable question: Is this something that atheists, agnostics, secular humanists, and non-religious people still find useful?

Read the rest of his chapter in the Patheos Nonreligious book, out now:

December 7, 2017
Merry Christmas Everybody, but It Never Happened Though...
Next Post