California is wine country. The rural parts of the state are one huge vineyard. Farmers here used to grow other crops, but wine grapes seem to be the hot agricultural investment these days. In the southern part of the state, the area around Escondido has a number of wineries, mostly specializing in red wines. Further up the coast, around Solvang is the Santa Ynez Valley. Thirty years ago, when Suzanne and I visited the area, there were a few wineries. Now there are hundreds. A hundred miles farther north, there is another wine area around Paso Robles. And then, north of San Francisco is the granddaddy of California winemaking districts, Napa Valley. But wait, west toward the coast are Sonoma and Russian River valleys that are crawling with wineries. That’s not the end either. Both Oregon and Washington have their own wine-producing areas. The wine craze is not confined to this country, of course. We have visited wine-producing areas in Australia, New Zealand and South Africa, plus all of western Europe. The world has gone crazy for wine.

Making wine is a mixture of chemistry and art. Selling it is a mixture of critical analysis and bullshit. The French perfected this a long time ago. They claim that they own the word Champagne, and don’t allow winemakers from any area except the “champagne district” in France to label their wine with that name. All the rest are stuck with calling it “sparkling wine.” We recently bought a bottle of French sparkling wine, produced about a stone’s throw outside the Champagne district. The price was about half of what it would have been if those poor grapes had been born on the other side of the tracks. Talk about discrimination!

The language used by wine critics is usually more flowery or fruity than the actual taste experience. Here’s an example from the Wine Spectator:

“The pure, intense and vibrant fruit is rich, focused, deep and expansive, without being weighty. The core of dark berry, mineral, graphite and cedary notes gain nuance, while retaining structure and purpose.”

That sounds great! I definitely want my wine to have purpose…mainly to give me a buzz. Minerals, and graphite don’t interest me much. Cedary sounds like something to put on the walls of my den…if it has sufficient structure.

The whole wine culture is like a religion. There are the red wine Cabernet Catholics and the Pinot Protestants who come in three flavors: Pinot Blanc (white), Pinot Noir (black) and Pinot Grigio (gray).  Merlot Methodists are another red group…and then there are those wicked Zinfandel infidels who sin with zin. The Chardonnay Christians are the elites, with Sauvignon Blanc fanciers a step lower in the pecking order. Riesling drinkers are the bottom of the barrel.

The high priests of wine religion are the wine critics. They tell the unwashed and ignorant masses what to think when they drink. Like all religious leaders, their sermons are couched in vague prose, based on little fact and a lot of imagination.

When we go wine tasting, I have a very critical palate. If I like it, it’s a good wine, and if I don’t, It’s a bad wine. Of course, I like some wines more than others, and I am willing to pay more for them. My limit is somewhere around thirty-nine cents more. Another thing I have noticed is that after the first glass, the second one always tastes better, and of course, the third one, better yet. So, if I start with a not-so-good wine, by the time I get to the third glass, it tastes pretty damn good (hic). If I make it to the bottom of the fourth glass, I am a devout believer! Hallelujah!

Some people claim to be wine connoisseurs. I am a wine kindasewer.

So…am I wine believer? Nah, but I can fake it. I think most self-described wine believers are faking it. Blind tasting tests have shown that sometimes even the experts can’t tell a cheapo from a prestigious label. Which leads me to suspect that many believers in other religions are faking it too.

December 21, 2017 The Nativity Census Challenge: Answer This.
Recent Comments
0 | Leave a Comment
Browse Our Archives
get the latest from
A Tippling Philosopher
Sign up for our newsletter
POPULAR AT PATHEOS Nonreligious
1

Nonreligious
Every (UK) COVID-19 Briefing Ever
A Tippling Philosopher 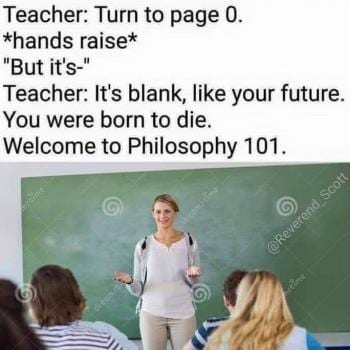 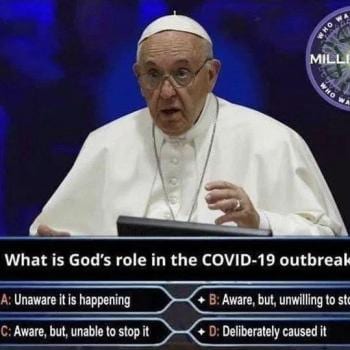 Nonreligious
It's Tuesday. Time for Some Fun.
A Tippling Philosopher
TRENDING AT PATHEOS Nonreligious