Life starts at conception, but what about personhood? Revisited.

Life starts at conception, but what about personhood? Revisited. January 19, 2018 Andy Schüler

Growing up in heathen headquarters (aka central Europe), I never met anyone in meatspace who thinks that a fertilized human egg is a “fully human person”.

I’ve met many Catholics in my life so far, but none of them would agree with the notion of a zygote having full personhood (disagreeing with the majority of official Church doctrines is quite common for Catholics in first world countries). Since this view is virtually non-existent where I live, I never had to debate it with anyone and, to be honest, I never really thought about this issue until recently. The first time I participated in a discussion on this issue was on JW Wartick’s blog (Jonathan already mentioned the discussion that ensued on his blog in this post). While Jonathan was mostly raising philosophical issues in this discussion, I was focused on whether the personhood-starts-at-conception position is defensible based on a 21st century understanding of Biology, especially Embryology.

I think that this position is necessarily incoherent, and I want to summarize my argument for that here.

A fertilized human egg is indeed “human life” – but so is an unfertilized egg, or a liver cell, or any other human cell (except for dead ones like hair cells, for example). Something being “alive” does not automatically imply that it deserves protection under the law. Bugs are alive, but laws against animal cruelty do not protect them – these laws usually apply to vertebrates only. If a fertilized human egg would be considered to have full personhood on the other hand, they obviously would deserve the same protection under the law that an adult human being enjoys. However, a big and unsolved problem with assigning personhood status is the fact that “personhood” has no universally, or even widely, accepted definition.

To me, it seems obvious that “personhood” / “non-personhood” is not a binary state. Personhood develops on a continuum. Perception, feelings and emotions, consciousness, desires and fears, memories etc., are attributes that are commonly associated with “personhood” – and there is no discrete moment in time where a developing human gains all of these attributes at once. They gradually develop, with the ability to feel pain, for example, developing rather early in development while consciousness develops rather late. A fertilized human egg lacks all of these attributes, so why does it deserve any more rights than an unfertilized egg? Both are single cells lacking all attributes that are commonly associated with personhood, the only difference is a change in developmental potential. JW argued that this change in developmental potential is an objective demarcation criterion:

Here’s where I see a difference: Unless one actively interferes with the fertilized egg, or some natural process terminates the pregnancy, it will develop into a human being. An unfertilized egg has none of these properties. Your argument tries to ignore the extreme disanalogies between the two states (fertilized and non).

Let me put it to you in a question: are you suggesting there is no rational discontinuity between the fertilized egg and the unfertilized egg?

A fertilized human egg indeed does have the potential to develop into an adult human being, but only under some conditions:

1. The fertilized egg manages to correctly move to the uterus and correctly attach to the uterine wall (which fails in >50% of all cases where the embryo will be aborted naturally, without any human intervention).

2. The embryo develops into a fetus without abnormalities (fails in ~15% of all cases, again leading to the embryo (or fetus, depending on stage of development) being aborted naturally without any human intervention).

3. The mother stays alive and healthy until the fetus reaches a stage of development where it is viable outside the womb of the mother.

For the unfertilized egg, you just have to add another condition:

4. The egg has to be fertilized.

However one chooses to define “personhood”, if one argues that it starts at conception, one reduces it to a biochemical triviality.

The main differences between a fertilized and an unfertilized egg is, that the fertilized egg possesses now 46 chromosomes instead of 23 and is “totipotent”. Having a full human complement of 46 chromosomes cannot possibly be a criterion for distinguishing personhood from non-personhood because this attribute is shared by virtually all human cells (all except for red blood cells and gametes).

So, if “personhood” indeed starts at conception, it must be a consequence of totipotency, since this is the only attribute that distinguishes a fertilized human egg from most other human cells. The “potency” of a cell specifies the different cell types a particular cell can differentiate into and “totipotency” means that the cell can divide and produce all differentiated cell types of an organism and thus ultimately develop into an adult form of the organism. Changes in potency are based on epigenetic “reprogramming”, which could also be induced in the lab. It has already been demonstrated that pluripotency (similar to totipotency, pluripotent cells can differentiate into all cell types except for extraembryonic tissues like the placenta) can be reactivated in specialized cells – the 2012 Nobel prize for physiology or medicine has been awarded for this discovery. Recent research indicates that reactivating totipotency is also possible.

If “personhood” starts at conception – it is a consequence of triggering the right genetic switches, which is a process that is reversible in principle. Assigning “personhood” to a fertilized egg detaches “personhood” from everything that we commonly associate with it – perception, feelings and emotions, consciousness, desires and fears, memories – all attributes that the egg doesn’t have, never had, and is not going to have unless it survives a long and failure-prone developmental process. Personhood is reduced to a biochemical triviality.

A religious person would probably disagree with my assessment of personhood being trivialized by assigning it to a fertilized human egg – (s)he might argue that “personhood” is a consequence of possessing a human “soul” and (s)he might further argue that conception is the precise moment where a developing human is granted a “soul” by his / her favored deity. Since the existence of a “soul” cannot be demonstrated (and is incredibly implausible based on a modern understanding of physics as brilliantly argued by Sean Carroll here), it cannot possibly be a foundation for secular law. However, even if one would grant a believer the existence of “souls” and the notion that “personhood” is a consequence of possessing a “soul”, the idea that ensoulment happens at the precise moment of conception is still absurd.

All cells in the developing embryo are identical copies of the zygote until the 16-cell stage. Each of those cells is totipotent. Each of those cells has the potential to develop into an adult human being! In fact, it is quite common that more than one adult human beings can trace their origin back to the same zygote – monozygotic twins (aka identical twins) are not uncommon and even monozygotic triplets exist.

Does this mean that whatever deity grants “souls” at the moment of conception is giving the zygote two souls at conception if it knows that it will develop into monozygotic twins (and three “souls” for monozygotic triplets)?

And if “personhood” is based on having a “soul”, does that mean that such zygotes are actually two / three persons all condensed into a single(!) cell ? This view is obviously incoherent.

But it gets worse. The development of monozygotic twins can be induced by embryo splitting, a technique that is actually used in reproductive medicine (see here). What does God do when we apply this technique? Does he create a second soul for the split embryo that we created (note that we are already at the embryo stage, several days after conception)? Could we really force almighty God to create souls that he didn’t plan in advance? Or does one of the identical twins grow up without a soul?

Personhood starting at conception is a hopelessly incoherent position – even if one would grant believers the existence of “souls” and would further grant them that ensoulment happens at the precise moment of conception.

[Reposted due to it being pertinent to another discussion, and for newer readers to access – JP] 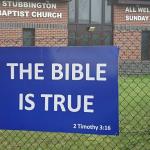 January 18, 2018
My Local Church: The Bible is True Because...The Bible Says So.
Next Post

January 19, 2018 Conservative Crackdown: Egypt Could Outlaw Atheism
Recent Comments
0 | Leave a Comment
Browse Our Archives
get the latest updates from
A Tippling Philosopher
and the Patheos
Nonreligious
Channel
POPULAR AT PATHEOS Nonreligious
1

Nonreligious
Why Is There Something Rather Than Nothing?
A Tippling Philosopher

Nonreligious
Your Foundations Are Wrong; Your Conclusion Is Wrong....
A Tippling Philosopher
TRENDING AT PATHEOS Nonreligious