This is a shocker for secularists wanting to keep church and state separate. This appears to be a rather exploitative response to the latest shooting. Because, you know, nothing stops mass shootings like indoctrination.

This is from The Tampa Bay Times:

With the Marjory Stoneman Douglas High shooting still looming large, its students in the Capitol to lobby for gun controls, the Florida House overwhelmingly passed a measure Wednesday its sponsor said aimed at bringing “light” to the schools.

The bill (HB 839) would require all public schools to post the state motto, “In God We Trust,” in a “conspicuous place.”

Sponsor Rep. Kim Daniels, a Jacksonville Democrat who runs her own ministry, said Florida needed the legislation, given the goings on in the state.

“He is not a Republican or a Democrat. He is not black or white,” Daniels said. “He is the light, and our schools need light in them like never before.”

She spoke directly of the school shooting, and said it’s no secret that the state has “gun issues” that must be addressed.

“But the real thing that needs to be addressed are issues of the heart,” Daniels said.

She mentioned video games as an example, saying children are being trained to become virtual assassins. Things might be getting so bad, Daniels suggested, that people will come to realize problems are much larger than politics.

“We cannot put God in a closet when the issues we face are bigger than us,” she said, urging colleagues to back the bill.

The bill passed 97-10, with the result winning a standing ovation. The Senate has yet to take up a companion bill in any committees.

I think I’ll leave this here: 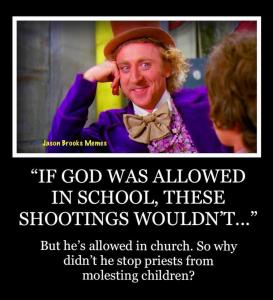 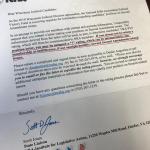 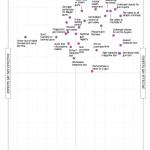 February 25, 2018 Gun Control: A Philosophical Analysis
Recent Comments
0 | Leave a Comment
Browse Our Archives
get the latest from
A Tippling Philosopher
Sign up for our newsletter
POPULAR AT PATHEOS Nonreligious
1

There's Nothing Supernatural About Evangelism
Hi and welcome back! Lately, we've been talking about personal evangelism, the...
view all Nonreligious blogs
What Are Your Thoughts?leave a comment
Copyright 2008-2020, Patheos. All rights reserved.