Brexit and the Media

As Winston Churchill once said, the best argument against democracy is a 5-minute conversation with the average voter, but there you go.

Has Brexit represented a win for democracy? In short, no. We have a representative democracy whereby we democratically vote for a local MP to represent us in Parliament by voting on issues on our behalf, issues that are often too complex for us to become experts on in any meaningful way. We voted for MPs who overwhelmingly supported Remain. There was an advisory referendum in the EU referendum vote. This was not legally binding, but the government took it on to be legally binding, as did the Leave campaign (one of which broke funding regulations).

One of the most important variables that contributes to making sound decisions is information – good information. And this seems to have been in short supply over the referendum period. This can partly be explained by having to appeal to an unknown future, but also largely due to misinformation.

We live in a society that is controlled by the media. For example, there are some 8 or so right-wing newspapers: The Sun, Times, Daily Mail, Daily Express, Telegraph, Evening Standard, FT. There are two left-wing papers: Guardian and Mirror. 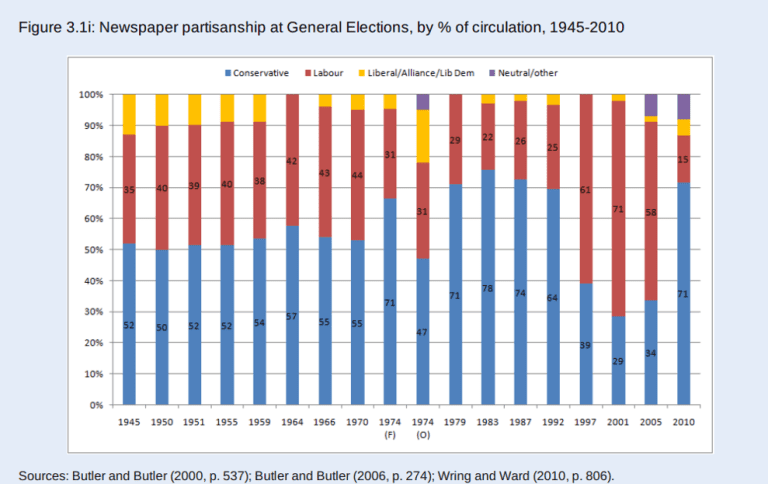 Let’s look at their readership:

Just two individuals – Rupert Murdoch and Lord Rothermere – controlled a staggering 52.2 percent of online and print national news publications in the UK in 2013. Over three quarters (77.8 percent) of the press is owned by a handful of billionaires. If you add up the readership of these right-wing newspapers, they account for a staggering 69 percent of national newspaper readership in Britain in 2013.

Press Gazette research has found that over the last 28 days of the campaign around 90m newspapers were printed with pro-Leave front pages versus around 30m with pro Remain fronts.

Here is an analysis of the support newspapers gave: 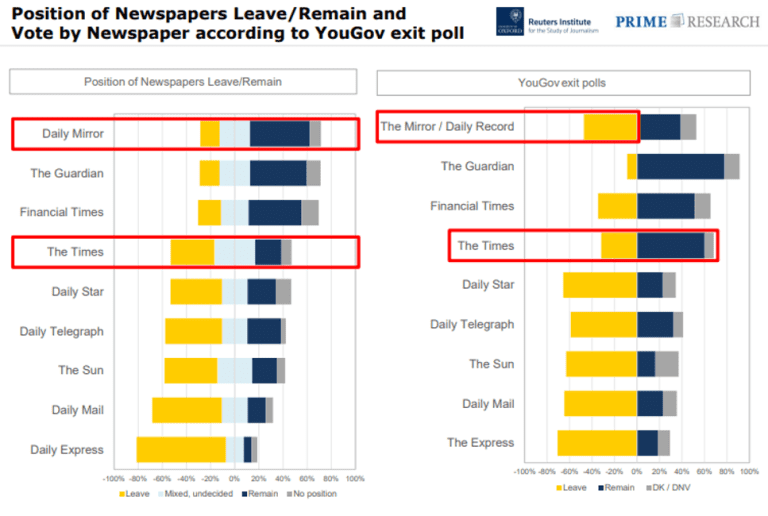 The Mirror had the lowest number of referendum articles, and thought supported Remain, due to its demographics in readership, had its readers fairly split but tipping to Leave.

One thing worth noting is this, by analogy. We know that from surveys, the newspapers considered the most reliable in survey after survey are the Financial Times and the Guardian. There were the two newspapers who most supported Remain. Imagin you had to vote on X, voting either A or B. You know nothing about the vote, so you look to who supports the different positions. If you found that the most reliable newspapers in the country supported A, and the least supported B, and the types of headlines of the newspapers supporting B were pretty distasteful, who would you, on this evidence, vote for? If you also knew that one of those newspapers who supported B also supported the Nazis at the beginning of WW2 also supported B? And so on…

The Reuters Institute for the Study of Journalism and King’s College London have both done some pretty hefty studies into Brexit and the media, some information from which I have presented here. Here are some executive summary findings:

It seems that the media certainly accentuated certain problems, such as immigration, and was able to bundle in other factors on the back of this. This is seen in the graph below, that shows that people weren’t concerned with the EU, until bang!, they were told to be: 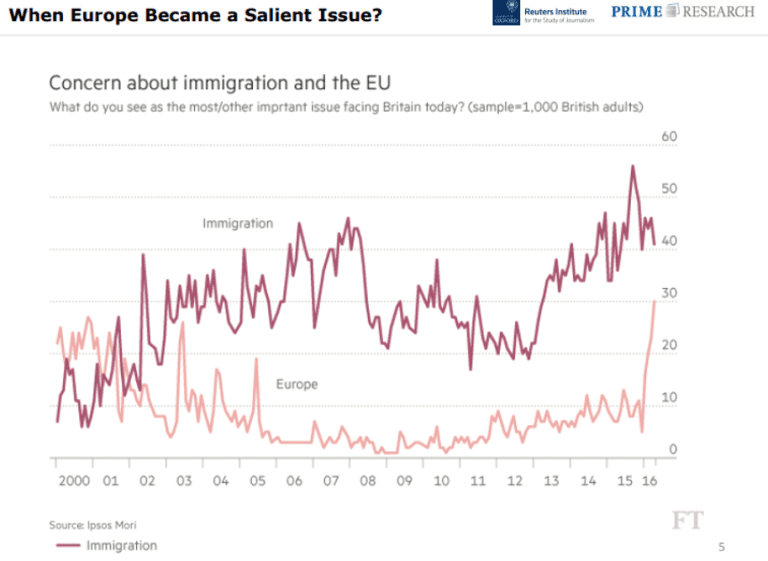 The founder of fact-checking website Breaking Views claimed that a series of “significantly misleading” articles misled the British public when they voted to leave the EU. He also claimed that press regulator the Independent Press Standards Organisation failed to deal with misleading stories adequately. He said corrections were insignificant, compared with often front-page prominence for the original stories. And he said that most of the 19 complaints In Facts has made to IPSO about anti-EU stories were not dealt with before Referendum day (23 June).

You could argue that this is free market economics and these organisations are giving these people what they want, but they prey on fear and psychology at the expense of rational evidence. A 2016 YouGov survey found the UK media to be the most right-wing in Europe. They are feeding misinformation and dictating the discourse.

And then there is Cambridge Analytica, something already talked about by Alan Duval here at some depth before they got destroyed by the media and fell foul of the law. This ended up being put in front of Select Committees in the UK:

Misuse of data and “cheating” by Cambridge Analytica and other companies associated with the firm may have altered the outcome of both the U.S. presidential election and the U.K.’s Brexit referendum, a company whistleblower told British lawmakers.

Chris Wylie, the former director of research at Cambridge Analytica, which has been accused of illegally collecting online data of up to 50 million Facebook users, said that his work allowed Donald Trump’s presidential campaign to garner unprecedented insight into voters’ habits ahead of the 2016 vote.

He added that a Canadian business with ties to Cambridge Analytica’s parent company, SCL Group, also provided analysis for the Vote Leave campaign ahead of the 2016 Brexit referendum. This research, Wylie said, likely breached the U.K.’s strict campaign financing laws and may have helped to sway the final Brexit outcome.

“If we allow cheating in our democratic process … What about next time? What about the time after that? This is a breach of the law. This is cheating,” he told British politicians Tuesday. “This is not some council race, or a by-election. This is an irreversible change to the constitutional settlement of this country.”…

Over four hours of testimony, Wylie gave insight into how Cambridge Analytica was able to build complex data analysis tools to target potential voters during multiple U.S. campaigns. That included ties to Aggregate IQ, or AIQ, a Canadian company which helped to develop the underlying algorithm that was used by Cambridge Analytica to target Facebook users. Both companies deny such a connection.

“The projects I was working on may have had a larger impact than I first expected,” said Wylie, who worked for SCL Group, Cambridge Analytica’s parent company, for about one and a half years. “It’s categorically untrue that Cambridge Analytica has never used Facebook data.”

The former employee also outlined how AIQ was used by the Vote Leave campaign to target British voters ahead of the Brexit referendum.

Questions have been raised as to whether payments to the Canadian company may have broken British campaign financing rules, though both the company and Vote Leave deny these allegations.

Still, Wylie said, the use of such data analytics by campaigns linked to leaving the EU had a material effect in convincing many people how to vote. He added that he would have voted to leave the EU if he could have voted, and his evidence was about protecting the U.K.’s democratic system, and not about overturning the 2016 vote.

“I think it’s incredibly reasonable to say that AIQ played a very significant role in Leave winning,” he told British lawmakers. “My question is where did they get the data? How do you create a massive operation in a country where AIQ had not worked before?”

This is pretty damaging for the idea that the referendum was a democratic affair.

What should be scary to you all now is that just the other week, the government narrowly voted down the second part to the Leveson Inquiry. The Sun’s headline was: “HOUSE OF SORE LOSERS Peers trying to muzzle the Press just days after MPs voted down second Leveson Inquiry”. Of course, it was voted down in a deal with the DUP, itself an attack on democracy as they were bribed to support the government. The thing is, the Leveson Inquiry looked to deal with some of the issues concerning a press with as much power as it has. The results of the first Leveson Inquiry have not been implemented and IPSO is deemed rather a sham. Simply put, our press is not accountable.

For those of you not aware of what the Leveson Inquiry is as pertaining to press intrusion and lack of accountability, you can start here.

The power of the media concerning its effect on democracy can be seen in the earlier Alternative Vote referendum. In the UK, we have a voting system called First Past the Post, more about which I will discuss in the next post in this two post series.  Due to the undemocratic nature of aspects of this system, it has been widely criticised over the years by the smaller parties, like the Liberal Democrats, who it largely disfavours.

When the Lib Dems went into coalition with the Conservatives some 5 or 6 years ago, one of their bargaining chips was that the FPTP system would have to go to a referendum. To give you some context, in the 2010 elections, the Green Party secured 1.8 million votes and got 1 MP, UKIP 4 million votes and only 1 MP, yet the SNP were securing an average of 1 MP PER 56,000 votes! Both the Conservatives and Labour both profit from the system, hence why it has not changed.

Why is this relevant? Well, for a number of reasons, some of which I will discuss next time. For these purposes (the media), it is worth knowing that the Yes campaign was winning in the polls. David Cameron, the then PM, realised this and phoned 4 Conservative leaning newspapers up one single night and asked them to start campaigning No. Pretty much overnight, the polls switched from Yes to No and Yes eventually lost. Was this democracy in action? No, this was media manipulation in action. And this is what we saw in the EU referendum, whereby the newspapers and media dictated the course of the debate and the “facts” that were disseminated.

What I am trying to say is that the EU debate and vote was not one about democracy, but one about who controls and disseminates the information.

[These noted are derived from a recent debate I had on the topic at Dorset Humanists.]

“UK media coverage of the 2016 EU Referendum campaign”, Martin Moore and Gordon Ramsay, Centre for the Study of Media, Communication and Power, King’s College London, May 2017