If I Invented Heaven – Getting it off the Ground

If I Invented Heaven – Getting it off the Ground May 27, 2018 Jonathan MS Pearce

I’ve been thinking a fair bit about mortality recently, for one reason or another. This often results in considering heaven. It is patently obvious that the Christian idea of heaven is nonsense, so let’s get that out of the picture straight away. Here are my previous pieces concerning heaven:

So on and so forth: check under my category of “heaven” for all of the others. Today, I will set out the principles I have in mind for creating heaven before later thinking about what it would look like.

First of all, would it be universal, or would you need to qualify to get in? If it was universal, why not have Earth or normal life as that heaven part? Of course, this is one of the really thorn-in-the-side issues for the Christian heaven adherent. If it is universal, then it effectively has no relevant connection to normal life on Earth.

If it was not universal, who would qualify? If you qualified based on some metric on Earth, then is heaven and not heaven a digital endgame for outcomes on Earth that exist on a continuum? Again, this is another criticism of the Christian heaven. OR, is heaven a variable outcome reflective of the human actions on Earth that exist along a continuum? Someone who achieves 58% of whatever metric of human behaviour is adopted gets a 58% standard of heaven.

It appears to be difficult even to get the opening groundwork done for constructing heaven. Or would that even be at the design phase, when looking at the purpose of the construction?

Shall we just lump for a reward idea of heaven? No. I adhere to causal determinism, in one guise or another (whether adequate determinism that takes into account quantum indeterminacy, or a deterministic understanding of determinism). You cannot reward people for things outside of their conscious control…

Okay, so I guess that means some kind of universal heaven. In other words, it is hard to think of the purpose of heaven other than to just give humans (or other sentient life – damn, more complications!) the enjoyment of eternal life in paradise. This other added complication then brings into play ideas like whether we should be allowed our beloved pets through the pearly gates. And what of other biodiversity? Would heaven end up looking like a visionary and utopian version of what we had left behind on Earth?

What I am saying here is that before you really start constructing heaven, you have enough problems with working out the more axiomatic ideas of its existence. As we know from most understandings of morality and how things should be, we need to know what the goal is. The same is true for constructing heaven: before we can work out the finer details of what it will look like, we need to understand its purpose. But we can’t really coherently define a clear purpose for heaven other than “a fun place for everyone, forever!”

And this brings into play another issue. From the dark recesses of my memories of philosophy, I recall Schopenhauer (or similar) talking about philosophical boredom in the context of an eternal heaven. He said:  “…for if life, in the desire for which our essence and existence consists, possessed in itself a positive value and real content, there would be no such thing as boredom: mere existence would fulfil and satisfy us.” Heaven couldn’t have boredom, but it seems it would necessarily be the collateral. Indeed, in The Wisdom of Life, he states:

The most general survey shows us that the two foes of human happiness are pain and boredom. We may go further, and say that in the degree in which we are fortunate enough to get away from the one, we approach the other. Life presents, in fact, a more or less violent oscillation between the two. The reason of this is that each of these two poles stands in a double antagonism to the other, external or objective, and inner or subjective. Needy surroundings and poverty produce pain; while, if a man is more than well off, he is bored. Accordingly, while the lower classes are engaged in a ceaseless struggle with need, in other words, with pain, the upper carry on a constant and often desperate battle with boredom. The inner or subjective antagonism arises from the fact that, in the individual, susceptibility to pain varies inversely with susceptibility to boredom, because susceptibility is directly proportionate to mental power. Let me explain. A dull mind is, as a rule, associated with dull sensibilities, nerves which no stimulus can affect, a temperament, in short, which does not feel pain or anxiety very much, however great or terrible it may be. Now, intellectual dullness is at the bottom of that vacuity of soul which is stamped on so many faces, a state of mind which betrays itself by a constant and lively attention to all the trivial circumstances in the external world. This is the true source of boredom—a continual panting after excitement, in order to have a pretext for giving the mind and spirits something to occupy them. The kind of things people choose for this purpose shows that they are not very particular, as witness the miserable pastimes they have recourse to, and their ideas of social pleasure and conversation: or again, the number of people who gossip on the doorstep or gape out of the window. It is mainly because of this inner vacuity of soul that people go in quest of society, diversion, amusement, luxury of every sort, which lead many to extravagance and misery. Nothing is so good a protection against such misery as inward wealth, the wealth of the mind, because the greater it grows, the less room it leaves for boredom. The inexhaustible activity of thought! Finding ever new material to work upon in the multifarious phenomena of self and nature, and able and ready to form new combinations of them,—there you have something that invigorates the mind, and apart from moments of relaxation, sets it far above the reach of boredom.

If you existed for eternity, and assuming you couldn’t be consistently “reset” (what would be the point of eternity, then?), then would you not just get bored. Eternity is, like, forever. And that’s a long time. Eternity is a really big problem to philosophically overcome. Perhaps heaven will become about thiknking and eternally philosophising. Now, perhaps that could work… More on that in the next piece.

As you can see, I am struggling to get past phase 1 – could you help me here?

May 25, 2018
Jim Bakker and Surviving the Apocalypse
Next Post 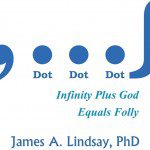 May 28, 2018 Infinity and God
Recent Comments
0 | Leave a Comment
Browse Our Archives
get the latest from
A Tippling Philosopher
Sign up for our newsletter
POPULAR AT PATHEOS Nonreligious
1