Libertarian Free Will and the 80-20 Problem

One of the most common defences of Libertarian Free Will (or contra-causal free will) is what I sometimes term the 80-20% approach. Most people, to some degree or another, accept that our lives are at least somewhat, and in most cases, a good deal influenced. This may be by genetic, biological or environmental factors. And it is hard to deny that, at the point of making a decision, we are having our decision influenced by external or internal motivators. This is expressed often as a claim like “Well, we are influenced quite a bit, but we still have some degree of free will” or “I think we are 80% determined, but 20% of our decision-making is freely willed”.

I will now show why this approach is entirely incoherent.

Before looking at this particular point, it is worth laying out the issue of causality and free will. Contra-causal free will is so called because it appears to want to break the rules of causality. Causality is a more difficult concept than many give credit for as you can see by my posts on the Kalam Cosmological Argument. Taken in its simple manner of understanding, it presents this issue, known in some parts as the Dilemma of Determinism:

What this means is that an action is either caused or it’s random. To claim it is caused but not determined is nonsensical. The basis of rejecting LFW is this, since neither option allows for free will. To think otherwise would imply that the agent caused the action but that it wasn’t determined; that the agent could have done otherwise. For example, at 9.15am this morning in this universe, when the phone rang, I could have picked it up, or I could not have done. I had the ability to do either. Or, at t=1 in causal circumstance C the agent could have done A or B. If the agent had done A and we continued the universe until t=10 and then rewound the universe, do you know what, he could have done B.

The problem with this is that at C at t=1, the agent had a set of reasons for doing A. This is what determined that he chose A. The universe up until that moment, his genes and biology, the environment up to every single atom, had causal influence to produce the ‘choice’ of doing A. So if we went on 10 minutes and then rewound to C at t=1, considering the entire universe would be identical, and the person identical, what COULD cause the agent to choose B and not A? In order to do so, the agent would have to be ever so slightly different, or the environment (universe) would have to be different. In order to claim that the agent COULD have done differently would surely require a REASON. Since a freely willed action cannot be randomly defined, as the agent has no ownership over random, then there must necessarily be a reason.

Causality takes on the form of a chain of events. A causes B which causes C and then D. This goes back until the beginning of the universe or some such similar causal scenario. What Libertarian free willers believe is that, since the causal chain cannot regress back to the Big Bang or similar, as this implies determinism, the agent must be the originator of the causal chain. Let’s look at this in terms of ‘why’ questions. Why did D happen? Because of C. Why C? Because of B, and so on. In the case of an agent, we cannot keep asking the why question because we keep going back and back, beyond the decision. So at some point, the agent has to be ultimately responsible for the decision – the originator of the causal chain. The problem is that without the ability to answer the why questions, the basis of the causal chain becomes “just because” which is synonymous with random or irrationality. This is why, in Freedom Evolves, philosopher Daniel Dennett claims that free will requires determinism since without it, there is no reason for an action and it becomes meaningless.

Which is all good and well, but what about the issue at hand? Well, when people claim we are, say, 80% determined, but that 20% of an action is still freely willed, we have EXACTLY the same problem – we have just moved that argument into a smaller paradigm, into the 20%. Assuming that we forget the 80% fraction which is determined so not being of interest to the LFWer, we are left with the 20%. But this is devoid of determining reasons. So what, then, is the basis of that 20% in making the decision? The agent cannot say, “Well  my genetically determined impulses urged me to A, my previous experience of this urged me towards A, but I was left with a 20% fraction which overcame these factors and made me do B” because he still needs to establish the decision as being reasonable.  OK, so if that 20% is not just random or unknown (but still grounded in something) and had any meaning, then it would be reasoned! The two horns of the Dilemma of Determinism raise their ugly heads again. We are left with reasoned actions or actions without reason, neither of which give the LFWer the moral responsibility that they are looking for.

It is not so much the scientific reasoning and evidence that the LFWer has to contend with (which is mountainous, and enough in its own right) but the metaphysical reasoning about causality which demands serious attention.

Check my book out on the Kalam: Did God Create the Universe from Nothing? 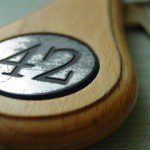 Nonreligious
Act & Potency: Responding to a Critic
A Tippling Philosopher

Nonreligious
Feser and Free Will - Characters in a...
A Tippling Philosopher
TRENDING AT PATHEOS Nonreligious