Here is another account in my series of real-life deconversion stories. They are often painful, psychological affairs, as you can see from the various accounts. Mine isn’t, though.

Please check out my book of deconversion accounts, edited with Tristan Vick, which can be bought from here, or by clicking on the book cover. The previous accounts can be found here:

Here, regular commenter at ATP, ephemerol, provides a more discursive piece than a sort of chronological account of their deconversion. It’s not so much a story, this time (plenty of those linked above), but there are lots of interesting points here to get stuck into. Over to ephemerol.

I was raised in a fundamentalist Christian sect. As I was on my way out, I saw through it as sort of like a casino game that, as far as the big picture is concerned, is the perfect storm of distractions that appear almost designed to keep you from noticing how rigged and unwinnable of a con game it really is; meanwhile, you’re being milked of your cash. And what I mean by unwinnable is, even assuming that the Christian god were real, and assuming there is an afterlife, there is no way to have any assurance whatsoever come “judgment day” that the deity won’t say “Depart from me, you worker of iniquity.” As long as your mind is infected with the religion bug such that you think this shit is real, and if you read what the Bible actually says, rather than perhaps are only aware of the feel-good platitude passages cherry-picked by the pastor for his mealy-mouthed sermons, then you can only come to the uneasy conclusion that the risk of a negative eternal outcome is totally unmanageable.

There’s a lot of people out there who weren’t necessarily raised “religious” per se, and may self-identify as “atheists,” and yet, just by virtue of having been raised in a culture of prevailing belief, their minds are nevertheless still infected with the religion bug, which is to say, they operate with the latent suspicion that there is something to the prevailing religious belief of their culture, that “everybody” couldn’t possibly be dead wrong. People just raised in a culture of prevailing Christian belief alone, without any closer contact than that, might not have a detailed opinion about Christianity, but I think most of these people are sure that, at least in its broad outlines, it’s true, simply because so many smart, successful, people who know a lot more about it than they do are so sure it’s true. I know that social bandwagon effect was a powerful inducement to accept it when I was a child growing up in my church.

So then, these people (like Lee Strobel, for example) who self-identify as atheists, but are really believers whose (specifically Christian) beliefs are merely latent, are easy targets to “convert” to Christianity. All that is necessary to reel them in is to arouse their latent sense of risk that their afterlife will be negative, and arouse a desire to manage that risk, and of course it goes without saying that clergy are the ones who can render the service of teaching you how to manage that risk. The hook has already been long set within them by the prevailing culture, all that remains is for someone to pull on it. This is my sense of the primary reason why an adult would “convert” in a sincere and authentic way to a religion because this is the primary promise that religions make. (It will likely take many years, if at all, for this person to learn enough about his religion to recognize that this promise, by its very nature, is one that cannot be kept, and that what the clergy have actually done is send him on a wild goose chase, going around and around in circles, chasing his own tail.)

I suppose, since there are different personality types, that for some, they’re persuaded by liberal theologies of minimal investment, that you need do no more than recite the words that you accept Jesus as your personal savior and then that’s it, and have no suspicions that might not be enough or curiosity dig any deeper to find out the bible supports what they’ve been told. I can’t speak for these types, since I am not one of them by disposition, and I’m not sure why they would feel the need to darken the door of another church even so much as a second time, so I don’t understand why anyone would regularly attend a church who teaches that theology.

But I understand fundamentalism, and it makes a lot of sense to me that an adult who has been reeled in by a fundamentalist church would rank ritual behaviors high on the list of attributes that helped “convert” them. For someone who is nearly totally ignorant of the specifics of Christianity, ritual behaviors are concrete things they can quickly learn to do that socially anchor them in and creates for them an “ID card” as it were, that allows them to immediately feel like an insider to this new tribe, rather than an outsider.

In my fundamentalist church, ritual behaviors were *extremely* important socially, as these were taken to be signifiers of sincerity of belief, and thus, indicators that you were one of the “true Christians,” rather than a “tare” among the “wheat.” It was also thought that “proper” performance of these rituals was necessary: it was, in effect, an offering that demonstrated the depth of your love and devotion to the deity, and that God would be watching and judging you upon the details of your performance of them, in much the same way that in Genesis, God judged the offering of Abel acceptable, but the offering of Cain he rejected as unacceptable. A term that got a lot of use was “Laodicean” from Revelation 3, in which the church at Laodicea was rebuked for being “lukewarm.” It says God knows their “deeds” but rejects them for insufficient performance, spewing them out of his mouth like perhaps coffee that’s supposed to be either hot or iced, but not room temperature. This was in contrast to the church at Philadelphia upon which it heaps nothing but praise.

But it was, of course, an open question what constituted proper, acceptable, or sufficient performance. One person might apply a “common sense” standard, while another might try to minimize their risk with a stricter standard. Whatever standard you thought appropriate, in social terms, you tend to look down on those who adopted a less strict standard than you as demonstrating insufficient love toward the deity, while those who adopted a standard that was more strict than you was self-righteous, so neither of them were necessarily as “true” of a Christian as you were. But privately, I think everyone was insecure, never really that confident that God was pleased with whatever offering of devotion they might display through their fidelity of performance of commanded rituals. And over time I think it was easy for individuals in that environment to drift toward stricter and stricter standards of ritual performance, as a means of trying to lower their risk that the deity might reject their displays of devotion because nowhere does the Bible indicate what standard he uses to differentiate between the “Cains” and the “Abels,” or the “Laodiceans” and the “Philadelphians.”

Curiously, I think the feedback either from other people at church, or the feedback one imagined they might get from the deity over their ritual behavior was probably negative on the whole in both cases, and yet that negativity probably served to bind people in more strongly than if that feedback had been positive. I am sure that adults (like my parents) who signed up for this did so out of a deep-seated innate fear that they brought to the table, and what the church brought to the table was a thoroughly biblical (if unorthodox) fearmongering theology, and I don’t think that’s a coincidence. That fear, that sense of risk, is what attracted them in the first place, and then it drove them to work ever harder to mitigate those risks and tamp down those fears. But ironically, the harder you work, I think the more you wind up stoking those fears, so your attempts to mitigate the risks you feel just make you feel them all that much more acutely. And at the end of the day, what you really need is certainty regarding the standard that will be used to judge you after you die, and since the bible critically fails to provide that, there’s really nothing that can be done to mitigate or manage those risks. You’re just a hamster on a wheel, making noise, but going nowhere.

And for any believers who might stop by and read this, deconversion wasn’t and isn’t my strategy for managing unmanageable risks. It’s not that I just wished them away, but rather, that for a hundred other reasons, Yahweh and Jesus ceased to be credibly existent beings to me, and subsequently, anything they might do to me seemed as real as the risk that Zeus or Ammit might do bad things to me after I die as well. Nobody can prove that the risks Zeus or Ammit pose to your presumptive immortal soul aren’t real, yet no one is interested in trying to manage those risks because they don’t judge them to be worth managing. Same thing. Surely so many Greeks and Egyptians couldn’t have been dead wrong about their religious beliefs! Actually, yes, they could. Same thing goes for Christians. 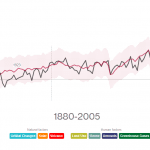 October 22, 2018 What's Really Warming the World? Compare and Contrast.
Recent Comments
0 | Leave a Comment
Browse Our Archives
get the latest from
Nonreligious
Sign up for our newsletter
POPULAR AT PATHEOS Nonreligious
1