Atheists Warn Secretary of Agriculture against Proselytizing to Staff

(Washington D.C., December 21, 2018) – The American Humanist Association (AHA) legal team sent a warning letter to U.S. Secretary of Agriculture Sonny Perdue in response to his promotion of Christian ideology. In his official capacity, Perdue sent a letter to all U.S. Department of Agriculture (USDA) staff via USDA email in which he cited heroic efforts of USDA staff as “a reflection of the true essence of Christmas, when God gave us His Son for a lost and hurting world.”

“The promotion of sectarian Christian views is wholly inappropriate, completely disregarding the fact that there are surely many non-Christians among the members of the USDA staff,” said David Niose, director of the AHA’s Appignani Humanist Legal Center. He continued, “It also violates the Establishment Clause of the First Amendment by clearly promoting and endorsing Christian beliefs.”

Roy Speckhardt, executive director of the American Humanist Association, explained, “the federal government includes a diverse workforce – one that is not represented, or even acknowledged, in Perdue’s divisive Christmas message.”

December 22, 2018 Kalam, Causality and God
Recent Comments
0 | Leave a Comment
"Uh - Huh Michel? Looks like you are NOT really a bible reader. QUOTE"The Christian version ..."
vortexau Religion Shapes American Attitudes about Gun ..."
"Except that only YOU say that, not I! The Left is the fascist group, fascism ..."
John Crawford Religion Shapes American Attitudes about Gun ..."
"Ah, so John Crawford reveals that he's a Fascist since in his Word View there ..."
vortexau Religion Shapes American Attitudes about Gun ..."
"Resenting parents? If their lives are a misery to them. Yes.My current thinking on Paley's ..."
Phil Rimmer Sacha Baron Cohen on Social Media ..."
Browse Our Archives
get the latest from
A Tippling Philosopher
Sign up for our newsletter
POPULAR AT PATHEOS Nonreligious
1 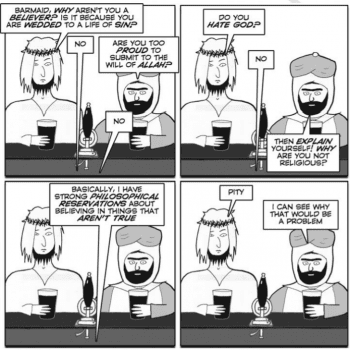 Nonreligious
"Hating God": Atheism as Rebelling Against a Father-Figure...
A Tippling Philosopher