Races Do Not “Exist” Even Though They Might “Exist”.

Races Do Not “Exist” Even Though They Might “Exist”. December 30, 2018 Jonathan MS Pearce

Yup, you guessed it, we’re gonna return to the Sorites Paradox. Sorry to bore you. This comment came up on the older post “IQ: Using Race Divisively” and I thought I would go over some points I have previously made:

You are clearly not very bright because you are so foolish as to believe that if there are not absolute, crystal clear dividing lines between categories, then categories do not exist. Talk to a biologist some time. Even species divisions are not always absolute. Are you thus going to tell me there’s no such thing as species?

The races of humanity exist. They have differing average IQs. This has profound real-world implications. You are not very intelligent. All of these are true. Get used to them.

Of course, it depends what we mean by “exist” when we might say “the races of humanity exist”. Many of you might have read the introductory stuff here and you can skip to the end, if you desire.

My favourite philosophical thought experiment, if you can call it that, and as many of my readers might know of me, is the Sorites Paradox. It can be defined as follows:

The sorites paradox[1] (sometimes known as the paradox of the heap) is a paradox that arises from vaguepredicates.[2] A typical formulation involves a heap of sand, from which grains are individually removed. Under the assumption that removing a single grain does not turn a heap into a non-heap, the paradox is to consider what happens when the process is repeated enough times: is a single remaining grain still a heap? If not, when did it change from a heap to a non-heap?[3]

The paradox arises in this way:

The word “sorites” derives from the Greek word for heap.[4] The paradox is so named because of its original characterization, attributed to Eubulides of Miletus.[5] The paradox goes as follows: consider a heap of sand from which grains are individually removed. One might construct the argument, using premises, as follows:[3]

Repeated applications of Premise 2 (each time starting with one fewer grain) eventually forces one to accept the conclusion that a heap may be composed of just one grain of sand.[6]). Read (1995) observes that “the argument is itself a heap, or sorites, of steps of modus ponens“:[7]

We love to use categories. That’s a blue flower, that’s a red car, that’s an adult, that’s a child. It’s how we navigate reality in a practical sense – it provides our conceptual map. However, you shouldn’t confuse the map with the terrain. Essentially (good word choice), we make up labels to represent a number of different properties. A cat has these properties, a dog these. Red has these properties, blue these. Often we agree on this labelling, but sometimes we don’t. What constitutes a hero? A chair? Is a tree stump a chair?

The problem occurs when we move between categories. It is at these times that we realise the simplicity of the categories shows weakness in the system.

You reach eighteen years of age. You are able to vote. You are now classed as an adult. You are allowed to buy alcoholic drinks (in the UK). But there is barely any discernible difference in you, as a person, physically and mentally, from 17 years, 364 days, 11 hours, 59 minutes, 59 seconds, and you 1 second later.

However, we decide to define that second change at midnight as differentiating the two yous and seeing you move from child (adolescent) to adult. These categories are arbitrary in where we exactly draw the line. Some countries choose sixteen, some younger, some older. These are conceptual constructs that allow us to navigate about a continuum of time. You can look at a five-year-old and the same person at twenty-eight and clearly see a difference. But that five-year-old and the same person one second later? There is no discernible difference.

And yet it is pragmatically useful for us to categorise, otherwise things like underage sex and drinking would take place with wild abandon, perhaps. Sixteen for the age of consent is, though, rather arbitrary. Why not five seconds later? Four days? Three and a half years?

Speciation is exactly the same. There is no real time where a population of organisms actually transforms into a new species. Because species is a human conceptual construct that does not exist objectively. We name things homo sapiens sapiens but cannot define exactly where speciation occurred. In one sense, it does not occur. In another, if you look at vastly different places on the continuum, it does (at least in our minds).

This is a version of the Sorites Paradox.

As I have shared several times, why not again? This image sums it up with aplomb:

In philosophy, there is a position called (conceptual) nominalism, which is set against (Platonic) realism. This conceptual nominalism, as I adhere to, denies in some (or all) cases the existence of abstracts. These categories we invent don’t exist (a word that itself needs clear defining), at least not outside of our heads. Thus species do not exist as objective categories. We invent them, but if all people who knew about species suddenly died and information about them was lost, then so too would be lost the concept and categorisation.

When we look at two very different parts of a continuum we find it easy to say those things are different and are of different categories, but when we look in finer detail, this falls apart. There is a fuzzy logic at play.

Species do not exist. Well, they do in our heads. When we agree about them. And only then so we can nicely label pictures in books, or in our heads.

In the same way, races do not exist in any objective sense. We can conceptually call them into existence for whatever reason we might want. We could do it to be racist, or for pragmatic reasons, or we could choose not to conceptually create the category of race because it might be counter-productive.  To choose to create race categories appears to be, for the most part, a spurious pastime. What remains to be said, or asked, is why such a person bothers with the race crusade at all? I could vilify autistic people, or quadriplegics, as not offering something or another to society, or being different, less than, more than etc. But I don’t because I am a compassionate human.

We could further categorise into hair colour: blonde, ginger, brunette and so on, and attach value (superiority or inferiority) to such categories. Why bother? Well, we do so for hair colour in merely differentiating the looks of one person against another for pragmatic usage.

As a child, I was ginger and I was bullied/teased on account of this, at some points pretty damagingly so. Outside of that pragmatic usage, such distinctions are often misused for purposes of in-group / out-group castigation.

Whether or not we do such categorisation comes down to the benefits or negative aspects of so doing: the consequences. Whether or not we should do something is, after all, a moral question. The challenge is that is is a very natural process to do so, to point out and indicate differences. It is a way of understanding the world that humans love all too much. We have a habit of putting people, things, plants, animals and anything else in boxes. It isn’t always so beneficial, though.

In conclusion, race doesn’t exist out there, but only in the mind. It’s up to you or us how we define it, and then, after that, how we use that definition.

December 30, 2018
Come to Portsmouth to See Me and Alan Duval Give a Talk on Morality
Next Post 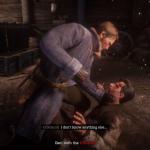 December 31, 2018 Red Dead II: Psychology and Morality
Recent Comments
0 | Leave a Comment
Browse Our Archives
get the latest from
A Tippling Philosopher
Sign up for our newsletter
POPULAR AT PATHEOS Nonreligious
1