You may have seen a flurry of articles bouncing around the ‘net recently, with reference to a paper in Neuropsychologia, called ‘Biological and cognitive underpinnings of religious fundamentalism.’ Here, for example, is an article on AlterNet that popped up on my Facebook feed, and here is another, on Salon, that I found during my research. The headlines typically sensationalize the findings as “Scientists have established a link between brain damage and religious fundamentalism,” or similar.

The fact that this paper has popped up now is a little odd, as the original article was published in mid-2017, and the free version of the author manuscript was posted in mid-2018. As it’s doing the rounds again, and as it was about time that I wrote a new blog post, here goes.

Links to the paper are above, and all images below are from that paper. What follows is a synopsis, and brief commentary (you can go to the original paper for citations).

Religious fundamentalism is the adherence to a set of firm religious beliefs, including unassailable truths about human existence. A sample of 1721 respondents in one study found that this description is accurate for around 7.7% of the US population, with around 1% agreeing that they are best described as fundamentalist.

Fundamentalism is characterized by a rigidity and inflexibility in one’s beliefs.

The neurological systems that underpin fundamentalism remain poorly understood. It has been known for some time that there is a spectrum of levels of commitment to faith and openness to updating these beliefs. This is similar to the way in which people hold political beliefs. Evidence suggests that patients with damage to the pre-frontal cortex (PFC), the region of the brain primarily responsible for abstract social beliefs, are more likely to rate radical political statements as moderate.

Religious and empirical beliefs differ in quality, in that empirical beliefs tend to be updated in response to accumulating evidence. Fundamentalist beliefs, in comparison, do not; they seem to encourage cooperative exchange within the in-group by remaining rigid and predictable over time.

The pre-frontal cortex is also the home of cognitive skills such as flexibility and openness. So, as the home of these skills AND the abstract social beliefs that are central to religion (recall Saroglou’s 4 B’s: Believing, Bonding, Behaving and Belonging), this study looks at specific sectors of the PFC (namely the ventro-medial and dorso-lateral PFC). Previous research has found that the ventro-medial pre-frontal cortex (vmPFC) is “critical to representing religious beliefs”, whereas the dorso-lateral pre-frontal cortex (dlPFC) modulates openness and cognitive flexibility. The hypothesis, then, is that damage to the vmPFC would be associated with increased fundamentalism, and damage to the dlPFC would modulate this.

The participants were 119 Vietnam veterans, with penetrating Traumatic Brain Injury (pTBI) to one or other of the two regions of interest, to other regions but not the PFC (see image below), and a control group of 30 healthy individuals who also served in Vietnam. Of the veterans with pTBI in the regions of interest, 2.5 % were Mormons, 38.8% Protestant, 16.3% Roman Catholic, and 10% had some other affiliation. Of the healthy controls, 35.3% Protestant and 23.5% Roman Catholic. Amongst both cohorts this question was not answer by 30-45% of respondents. Both cohorts did complete Altemeyer and Hunsberger’s ‘Religious Fundamentalism Scale’, which will detect the shy fundamentalists that did not respond directly to the religion question, with questions like “To lead the best, most meaningful life, one must belong to the one, true religion”; “It is more important to be a good person than to believe in God and the right religion.” In addition, standardized tests were administered for flexibility and openness. 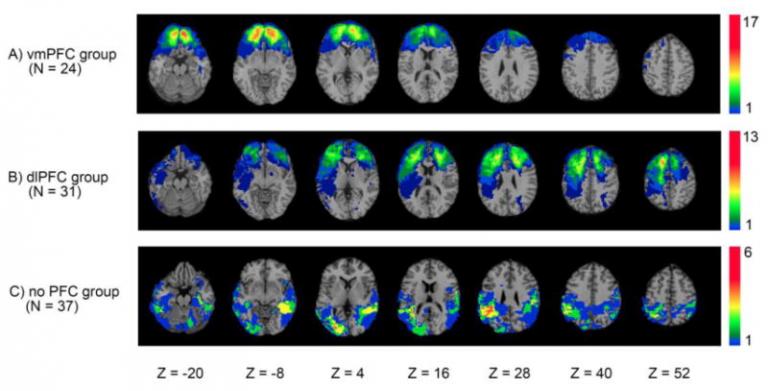 These are the results, broken down into the areas of relevance.

All forms of brain injury, whether PFC or elsewhere, showed a significant impact on pre- and post-injury intelligence scores. Of the three cohorts with brain injury the vmPFC patients were the most negatively impacted. Follow-up tests on whether damage concentrated on the left or right side had differentia effects found no significant difference.

Mediation between cognitive flexibility/openness and damage to the PFC 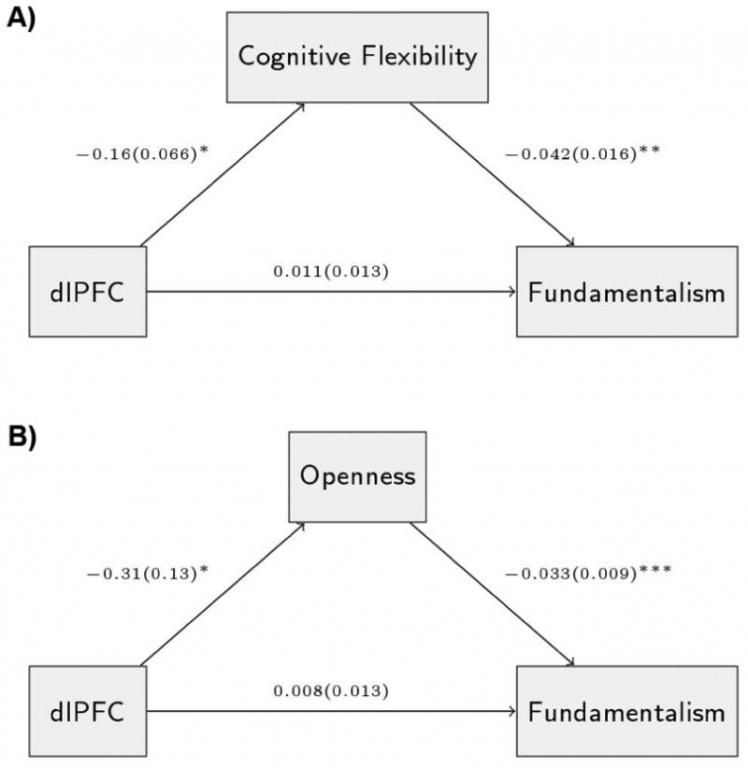 When the same tests were done with openness in place of cognitive flexibility, the findings were more-or-less the same. Meanwhile, damage outside of the PFC region had no statistically significant effects.

The model derived from the above measures explained 18.5% of the total variance in fundamentalism, in this group. Cognitive flexibility contributed 4.6% of the unique variance, and openness, 9.7%. In combination, PFC lesions uniquely explained 3.5%, with 1.3% coming from vmPFC damage, 1.7% coming from dlPFC, and a further .5% coming from a combination of the two. However, when taking into account the overlap between the brain damage and the pre-existent traits, the vmPFC explained 1% of the variance, and the dlPFC explained only 0.02%.

From this research, and other work in the field, it seems likely that religious beliefs, like other forms of complex social knowledge, are stored in the PFC and closely associated brain regions. By contrast, religious heuristics and simple stereotypic beliefs are associated with areas further back in the brain. With damage in the PFC, the individual becomes more reliant on existing and over-learned heuristics and stereotypic beliefs as vmPFC damage in particular makes it more difficult to generate new ones.

Other researchers have found that patients with damage to the vmPFC are impaired in social and reward valuation, potentially leading to changes in patterns of social judgment, and the need for heuristic and/or stereotypical means to assess these things. It is this pattern that leads to them judging extreme (possibly fundamentalist) behaviours as more acceptable.

Participants were all male Vietnam veterans, and only CT scans were used. The bullets or shrapnel responsible for the pTBI was still in the braincase, and as such more accurate, magnetic-based imaging technologies, such as MRI, could not be used.

Previous findings suggest that religious beliefs emerge alongside moral, political and legal beliefs, and both types of belief (religious and non-religious) utilize the vmPFC but differ on which other brain regions are used. As such, finding commonalities and differences between religious fundamentalism and political dogmatism would be a useful future direction.

Whilst religious people are not inherently inflexible, one of the functions found that support the maintenance of religious conviction is belief revision. Questions that arise, therefore, will be around how social and general environmental responses remain flexible in more religious people, and how doctrine, social prediction, and adaptability interact.

Contrary to the sensationalist headline (“Scientists have established a link between brain damage and religious fundamentalism”), the brain damage accounted for a tiny percentage of the variance in the sample. So whilst it is “a” link, it’s not exactly headline-worthy, nor even the key finding. If you allow that both the brain damage and its interaction with cognitive traits is “the link” to brain damage, that’s still only 18.5% of the variance in this sample. Which is quite a lot for a complex behaviour like religious observance, but it’s also only a sample of 119 people with a very particular set of background traits.

Vietnam veterans are necessarily in their mid-60s, or older, so whilst they’re not the college kids that usually turn up in psychological experiments, they are a very particular subset of US society. Recall, also, that Vietnam vets complain about the way they were treated when they got back from the war, and that surely gave rise to a fairly particular set of complex abstract social beliefs that could have interacted with their brain injuries to give rise to a preference for a more fundamentalist worldview, and indeed made them less open. The headline should maybe have been more like “Scientists have established a link between brain damage and religious fundamentalism among Vietnam vets”.

As such, I would be interested to see some work on the social circles of the participants in this study, and how they changed over time. And how aggrieved they felt about not receiving a heroes welcome on their return. Obviously the fact of being a Vietnam vet will be a significant confounding factor, but ascertaining whether the people with more severe damage and/or greater fundamentalism surrounded themselves with other, more fundamentalist people after the war, and looking at how much of that behaviour was explained by the PFC damage, and how much their overall fundamentalism is explained by close social ties, would be instructive… but extremely difficult.

What this study seems to be saying, more than anything that it actually says, is that openness and cognitive flexibility are protective factors, providing resilience that, when not present, or when compromised or overloaded, leave people prone to adopting fundamentalist beliefs.

I’m a little concerned by the way the use of the word fundamentalist seems to switch from not having an initial capital, for the most part, to having one in the context of the quoted survey. Clearly, ‘Fundamentalist’ has a very particular meaning in the US, and means something different to ‘fundamentalist’ in the general sense. The 2.5% of the cohort that were Mormons, for example, could not be Fundamentalists, by definition.

Quite aside the findings of the paper, it is interesting to note that it was damage to the vmPFC that was key in BOTH the reduction of intelligence AND abstract social beliefs, which suggests, at least somewhat, that the intelligence tests used, in this case the Armed Forces Qualification Test (AFQT-7A, 1960), before and after military service, and in particular the Token Test (1994), for verbal comprehension, do have a cultural bias to them.

January 15, 2019 Deconstructing Aquinas’ Fifth Way: Sup-Optimal Nature
Recent Comments
0 | Leave a Comment
Browse Our Archives
get the latest from
Nonreligious
Sign up for our newsletter
POPULAR AT PATHEOS Nonreligious
1