Nothing I say here will be particularly controversial to those with a passing interest in the psychology of religion. The idea is that the belief in God is a byproduct of other mechanisms that had been at play in the development of the human brain. This is a similar sort of approach to the idea that moths fly into the hot flame of a candle and kill themselves not because they have evolved the tendency to fly into fire but because they use light as a navigational tool and this skill, which obviously has its use, can be misappropriated and cause the moth to die.

Theboar.org has an interesting piece that includes some of the following:

The by-product theory of religion suggests that beliefs and behaviours are reducible to a by-product of evolutionary cognitive adaptations. Psychologist and author of the Cognitive Science of Religion James A. Van Slyke stated: “Evolutionary psychology suggests that the human mind is comprised of many different adaptive cognitive modules. These modules contain cognitive programs specific to a particular evolutionary environment that required adaptive solutions to problems faced by our ancient Pleistocene ancestors.”

Given that we are social beings with the need to form bonds in our societies, we tend to form attachments, whether with our friends, family members, lovers, or even attachments with non-humans such as our pets or materialistic inanimate objects. As you noticed with the theme, such attachments are possible with religious, omnipotent, divine entities.

At a very important time in our brain, and therefore mind, development, we had psychological needs that caused the functional developments of certain heuristics and mental tools, out of which (accidentally, it seems), gods and God emerged.

We believe in God because we imagine that we are attached to a real entity, given our cognitive ability to anthropomorphise objects. By using this method of attributing human traits to non-human entities such as God, it makes it easier to connect with them. It’s an evolutionary trait which can first be seen in children, with their ability to attach human characteristics to their toys, in which when they’re broken or lost they tend to get emotional and even protective.

Another aspect concerning cognitive and evolutionary adaptations that occur in our childhood is via educational and household norms. At a young age, when we are learning and developing ideas about the world, we are taught not to disagree with religious teachings. Such discouragement, coupled with our ability to anthropomorphise objects, creates a stronger sense of belief of a deity.

Richard Dawkins and many others talk about this idea that we take on advice and information and unquestioningly from our elders, or those figures in our (tribal) communities who are held in high esteem. And there might be very good reason for this. For instance, if we take on the advice from a village elder that eating a certain berry is dangerous because it will harm us, then those of the village who take on this advice unquestioningly will survive by not consuming this berry, assuming that the information is correct. Those who do not believe the elder, in this circumstance, might try the berries anyway and die as a consequence of not believing the elder. If, of course, the elder is not telling the truth, then no one really suffers. It’s a kind of Pascal’s Wager.

If, then, the elder advises you to believe in some animistic deity, then there is a great likelihood that those in the village will eventually take on this advice unquestioningly. This is especially the case if such claims are simply not verifiable.

Many religious people will claim that the god-shaped hole in our heads that has been created this way is surely evidence of a creator. I would argue to the contrary, since this god-shaped hole appears to allow the believer to arrive at any number of deities that have existed from time immemorial in the minds of those believers. It started in animistic shamanism and has now moved through to highly ritualised, communal behaviour in orthodox organised religion. And every flavour in between. It is hard to argue that this shows evidence of the Christian God, for example.

And these ideas, together with those of patternicity and agenticity, and the ability of religion to explain the unknown (thunder is the wrath of Thor smacking his hammer) and all the other aspects of the psychology of religion that I haven’t mentioned here, really to give a powerful case for the seemingly obvious conclusion that God is an idea that has either provided functional benefit to the believer or has provided no benefit at all, being a neutral corollary of other mental heuristics. These may later be appropriated beneficially to the believer as well. For example, the idea of God might add identity to a particular culture that binds it together in a large in-group that gives it an advantage over another competing culture.

I find the psychology of religion an eminently fascinating subject.

Nonreligious
Religion, Atheism, Authoritarianism and the In-Group
A Tippling Philosopher 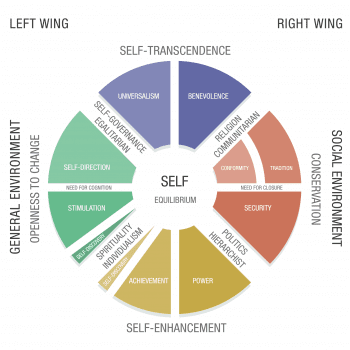