“The Church of Exemptions” Reviewed

This is a book review of an upcoming fiction novel by Luis Granados, called The Church of Exemptions. It is a forthcoming release from the American Humanist Association. This review is written for ATP by Geoff Benson: 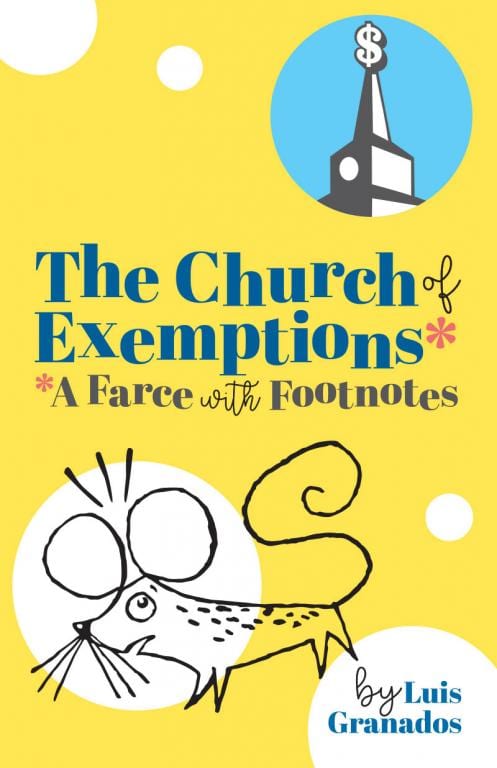 The book is a fictional attempt to highlight the extraordinary, and unfair, ways in which religion is used to circumvent laws, perfectly sensible laws at that, in the US. By attaching the label ‘religious belief’ to your business name it would seem you can justify pretty well any breach of the law, or regulatory framework, without compunction.

The story centres on Nick Fratelli, a somewhat unambitious lawyer working in a government agency, who has the bright idea of attacking religious excess by the seemingly simple expedient of setting up, and running, his own religion. He leaves his job in the department and goes to work, on a consultancy basis, for a large and ambitious law firm. He succeeds from the off, and much of the plot centres around the increasingly more bizarre, and outrageous, legal exemptions he claims, those he works with not appearing to realise his intentions, but relishing the profits he generates.

It all starts when Fratelli inadvertently finds himself talking to a ruthless billionaire, who’s fracking business is being obstructed by local lawmakers and regulators. Fratelli ingeniously contrives a method whereby fracking can be justified on the basis of religious belief, though he tests the argument first with less controversial claims, such as the religiously based right to sell marijuana! Gradually the claims become more outrageous, eventually to the point where characters have serious moral doubts about some of the effects they are having via their ‘exceptions’. There’s plenty of reference also to real examples, such as the Church of the New Song, whose principal sacrament consisted of steak and sherry, and one of whose religious beliefs was that white supremacy was God’s will, and which succeeded in maintaining its religious legal status for more than thirty years. A comprehensive, unusual for a work of fiction, set of references at the end of the book enable readers to research this area much more fully.

Of course, these tactics rapidly comes to the attention of the more ‘traditional’ religious groups, all of whom resent the intrusion, realising that the attention the new ‘religion’ is attracting might reflect somewhat badly on themselves. In amongst this is plenty of story, with a few twists, characters that are totally believable, and plenty of pace. It’s impossible ever to switch off completely from the underlying message; even very devout people are likely to become angry at the excesses that religious privilege confers, and the damage it causes.

This is very much a book that succeeds on all fronts, as entertainment, education, and provocative thought, especially perhaps this latter. Then again, that’s the main point of a book like this; it should challenge, and it should arouse emotional response.

January 25, 2019
What Shall I Read During My Treatment?
Next Post