Here is a bit of a magnum opus I have just written to some MS forums that should be of pretty universal interest here. I will end it with some comment specific stuff to those who have cast their naive opinions here. Although you might think this overly personal, please take the time to read it. Now with copious typos fixed.

So, as many of you will know, I have recently been diagnosed with Primary Progressive Multiple Sclerosis. This is the type of multiple sclerosis that only 15% of sufferers have and for which, on the NHS, there is little or no treatment. What I’m about to say might play merry havoc with people’s psychology is because, after all, people are funny things. They make decisions and stick with them through thick and thin irrespective of what evidence or what other people might say. I fully expect some pushback to what I say and I certainly don’t want to sound like some kind of evangelical. I’m just trying to explain why I made the decisions I did and why I am deeply frustrated at the health care systems all around the world who do not support this treatment, or who appear to finally be coming on board.
First of all, what is HCST (Haematopoietic stem cell transplantation)? You can find out far more details and I’m going to give you here. In synopsis, they harvest the good, pristine cells in your body known as stem cells that are produced in your bone marrow. They do this in a far less invasive way than they used to 20 years ago – it is now rather non-myeloablative chemotherapy than ablative chemotherapy. This means that they don’t completely destroy all the cells that you need to operate functionally but, hopefully, the ones that really matter – the immune cells – and maybe 15% of the others just for good cause. This means that the risks are far fewer for chemotherapy than they used to be. Half the problem is that neurologists and experts seem to look at the stats that are 20-years old when they were performing this far more difficult procedure, rather than newer ones. After the chemotherapy, they reinject the stem cells that they have frozen for four days back into your system. As your chemotherapy kills off your immune system and over the next week or so, your stem cells kick in to bring your immune system back to life. Happy days. Vast amounts of pretests are now done to ensure that those with risk factors are sent home without giving them the procedure. This has greatly reduced mortality and infection rates.
BENEFITS OF HSCT
A) HALTING AND REGRESSING
So let’s start looking at the advantages of doing HSCT. This is the real no-brainer of the situation because HSCT provides the best course for halting progression, for bringing about regression of symptoms and for having the fewest side-effects. The drugs (DMDs [Disease Modifying Drugs] for people with Relapsing Remitting MS) have myriad side-effects that can leave you in all sorts of problems. Whilst there are risk factors involved with any kind of serious operation involving stem cells and chemotherapy, these are mitigated by fantastic procedures in the decent clinics that provide it. So, halting and moving your EDSS (disability score) level back down is the name of the game without the debilitating effects of the DMDs.
B) SUCCESS RATES
For example, I am led to believe that lemtrada has an excellent success rates in the first year (with side-effects), nearing 100%, but that it trails off to 18% in the fourth year so that relapses are exceptionally common. On the other hand, HSCT offers something above 85% right across all four years (I am giving figures of all types of MS sufferers and journeys here). Success rates for RRMS [Relapsing Remitting] patients are 90 to 95% successful and for PPMS patients are a little less. Obviously, there are mitigating factors that will play into the success rates such as coming into the treatment with very high EDSS scores after arriving after a long journey through MS, being young, older, cognitively more impaired or not. Being on DMDs for a very long time can also affect success rates, which is why you need long washout periods to get these drugs out of your system. Now confusion over what DMDs to take can be quite a headache and the side effects can be so debilitating that these courses of action are problematic in their own rights.
C) DMDs
The key point to take away here is that DMDs are merely sticking plasters that seem to treat the symptoms or try to slow down progression at best. On the other hand, HSCT looks to tackle the root cause. Well, the root cause is gene deficiency and we are not likely to be up to deal with that just yet. However, the next best thing is the mechanism by which the inflammation and autoimmunity hit the body. This is what HSCT tackles. I will talk about this a little bit in the barriers to HSCT section. In conclusion, the science really is in for HSCT being the best course of action. I believe Dr Burt, over in Chicago, is just about to produce some pretty stellar research to confirm this. 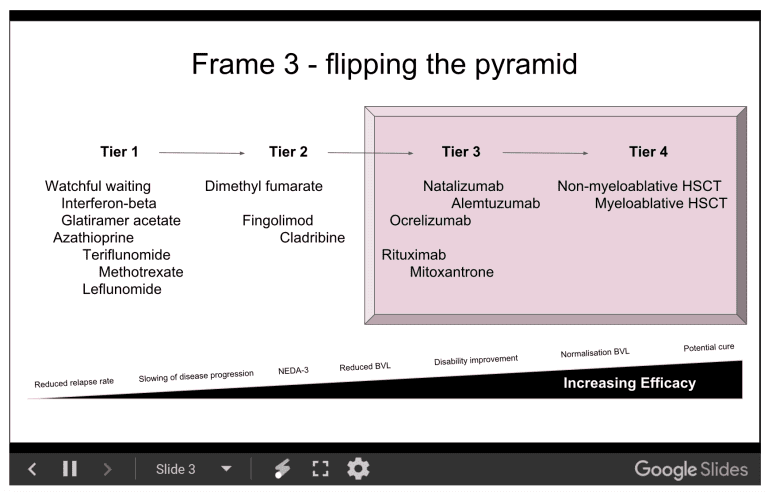 Here is a playlist of the 20 or so video diaries I have done (they get more juicy as they go on):

Back over to the usual me in exposing this nonsense:

I think what you’re actually saying is…

‘Universal health care for thee…
but not for me.’

Or maybe I should say what you’re actually doing.

Because what Johnny is actually doing of
late is getting him some extra special superb health care (i.e. HSCT treatment**
(in Trump’s motherland of Russia!)) which presumably most of the other 100,000
Brits with MS are unable to get.

A more naïve nebbish might think Johnny would accept only
the TLC available to everyone.
You know, like universal health care.

This really is the most naive sort of rubbish that someone could write. It is plainly obvious that universal health care systems have great advantages around the world. There are very few if any universal health care systems whereby the providers seek to reverse the universality of the provision. People don’t go out on protests and marches demanding that insurance companies and corporations provide healthcare for them and their citizens! In places like the UK, where we have nefarious government entities acting in pseudo-corporate libertarianism; they try and chip away at edifices of these healthcare systems to try and emulate places like America. However, you look at America’s now standing in the healthcare systems in the world and they are certainly not the obvious envy. We should not be moving in that direction.

The situation with my case is interesting because corporatism has infested and infected the universal healthcare system to a degree that compromises its efficiency and the job it sets out to do. As soon as you have healthcare professionals – physicians, neurologists, policymakers et cetera. who are lobbied by vested interests with huge packets of money to earn, then you have problems. This is exactly what is taking place in the US and in the UK.

HSCT should be front and centre stage of every healthcare pathway and professional in delivering treatment for multiple sclerosis. The reason, the main reason, is due to the interference of money and finances from Big Pharma. Because of the overwhelming success of HSCT in tackling MS in the long term, big pharmaceutical industries stand to lose absolutely gazillions of dollars. Therefore, they are doing their utmost to try and close the options and stop the plans in the works for those healthcare systems who are trying to do the best for their patients. Unfortunately, money walks. And this is what happens when you allow universal healthcare systems to be compromised by lobbyists and corporations with vested interests. Whether they be health insurance companies, pharmaceutical companies and the charities themselves… What many people don’t realise is that the main charities support the main diseases (in my case the MS Society in the UK) are funded largely by these very same big pharmaceutical companies. Therefore, they really compaign solidly against HSCT even though it is by far and away the most effective treatment.

In my situation, HSCT is gaining traction by the month. This is because, and eventually, we hope and know that results and data will win through. HSCT is not only more effective, but it is far, far cheaper for the healthcare systems that provide it. The only reason I had to come to Russia to get my treatment is that they have been running it for 20 years, whereas it is still in its infancy in the UK. That is changing right now has 18 new establishments are trialling it against the main drug lemtrada. Unfortunately, my sort of MS is the least likely to receive it on the NHS at the moment whilst it is still in trial phase.

So, commenters like See Noeveo, you should not be railing against universal healthcare, but against the free market that seeks to manipulate and downgrade its efficiency.

Now do your best to combat that substantively. Or shut up.

April 2, 2019 ATP Interviews Alan Duval on Freedom of Speech
Recent Comments
0 | Leave a Comment
Browse Our Archives
get the latest from
A Tippling Philosopher
Sign up for our newsletter
POPULAR AT PATHEOS Nonreligious
1