The Credibility and Number of Resurrection Witnesses

As I have previously said in my Resurrection series, starting off with looking at the contradictions within the Gospel accounts:

This idea of the number of witnesses is an important one. No, it’s not an argumentum ad populum, but the more witnesses you have to something, the higher the credibility it surely has, ceteris paribus. That’s not, of course, to say it automatically becomes credible, or something with more witnesses is, therefore, more credible than something with fewer witnesses. Things are always more complicated than that with whole hosts of variables. But, the number of witnesses is an important variable – just think of a court of law and witnesses to a crime.

The point is, the number of witnesses and the level of evidence for many other claims – conspiracy claims, dubious miracle claims etc. – are far more numerous and far more superior, and yet Christians will easily dismiss these other such claims whilst holding onto the Resurrection claim with white-knuckled evangelism.

This short comedy video alludes to exactly this problem.

The Christian might argue that the witnesses to Sathya Sai Baba’s miracles and conspiracy theories or whatnot are simply not credible witnesses. But this raises the question over whether ex post facto Christian Messianic cult members who have just found out their Messiah, who was supposed to be the living saviour, has just died, are themselves credible witnesses?

I’ll leave you to answer that question. 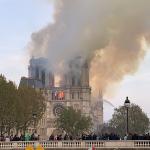 April 25, 2019 Quote of the Day: Phil Rimmer on Notre Dame
Recent Comments
0 | Leave a Comment
Browse Our Archives
get the latest from
A Tippling Philosopher
Sign up for our newsletter
POPULAR AT PATHEOS Nonreligious
1