Is the Net Closing in for Trump?

Trump has been under enormous pressure from every conceivable angle you could imagine, but he remains almost impervious as far as his core voting bloc and the Republicans in both houses are concerned, it seems. Senator Lindsey Graham appears to have gone back on his word from the impeachment proceedings of Bill Clinton (and shows himself to have fewer principles than we thought he did before):

It seems forever like morality plays second fiddle to power as both voters and Senators give Trump a free ride on seemingly everything in order that he and his party remain in power, even though they have now lost control over one of the Houses. In fact, with that, we can see that perhaps the net is closing in as various groups are now using subpoenas and hearings to pile pressure on Trump and his appointees.

The AG Barr hearing was a farce of extraordinary levels as Barr was caught obviously lying on at least account of denying knowledge over whether Mueller supported his conclusion or not, as Van Hollen questioned. Know for a fact that he received three letters and written communications and a phone call from Bob Mueller himself about how unhappy he was with Barr’s summary of his report. If this wasn’t lying under oath, then I don’t know what it is:

We now know Mueller stated his concerns on March 27th, and that Barr totally misled me, the Congress, and the public. He must resign. pic.twitter.com/rod404BbYo

The embarrassing appearance no doubt led to him skipping the second hearing, and he could even face indictment for refusing to appear (there is precedent and Constitutional rights for this).

It gets worse. Bernie Sanders is asked about tax returns, so he produces 8 years’ worth – a stark contrast to Trump’s belligerent refusal to publish anything that remotely resembles financial records. California looks like passing a law that stipulates that a candidate for presidency cannot appear in California during a campaign if they haven’t produced tax returns or financial appropriateness. Donald Trump and his three sons are presently suing Deutsche Bank and Capital One for agreeing to declare financial documentation relevant apropos trance financial goings-on. It will only slow down what will almost certainly come to pass.

Trump surely has to be feeling the heat. There are very real possibility that the Democrats will follow up with an attempt to impeach him, as well as something like 16 separate legal actions against him. Legal probes including work that is going on in New York:

New York doesn’t just mean the Southern District of New York, the federal prosecutorial outpost in Manhattan. The state’s Attorney General and its Department of Taxation and Finance also have active investigations of Trump entities. Across the East River, in Brooklyn, the Eastern District of New York is reportedly looking at Trump’s inaugural committee. But Trump may have the most to fear from SDNY.

And if you want to understand the potential danger to Trump from SDNY, it’s worth re-visiting the case of Michael Cohen.

Cohen, who is scheduled to start a three-year jail sentence in May, shows what can happen when a prosecutor aims all of his enormous legal powers on a single target. It is not true, though it is often alleged by Trump supporters, that the Mueller investigation began with the Steele Dossier. (The FBI opened its inquiry in the summer of 2016 after an Australian diplomat reported that a Trump aide may have had a heads up about the email hacking plot.) But in Cohen’s case the dossier is probably what triggered the FBI’s aggressive investigation of his life….

The problem for Donald Trump in all this? He directed Cohen to make the payments and signed checks to Cohen to cover the payments while he was president. Another of the checks reimbursing Cohen was signed by Donald Trump Jr. Forget about whether you agree that this is a strong case or not, but simply based on the way that they treated Cohen, how can the prosecutors here send Cohen to jail, condemn his behavior as an attack on the flag and apple pie, and simply walk away from holding his co-conspirators accountable?

And that’s just the campaign finance case, where we know most of the facts and actions taken by the president and his son. Now imagine if prosecutors are digging into Trump’s finances and companies the same way they dug into Cohen’s. Cohen has already given them a roadmap to potential charges against his former boss. In his public and private testimony before Congressional committees, Cohen alleged a long list of behavior by Trump and his companies that are the sorts of things that might sound minor, and which have received surprisingly little coverage while everyone has been focused on collusion, but in an aggressive prosecutor’s hands could amount to felonies.

Cohen was dismissive of the idea that Trump colluded with the Russians, but he painted the president as a liar and a con man and told a series of incriminating stories. Did Trump falsify his financial statements in trying to obtain a loan with Deutsche Bank when he tried to buy the Buffalo Bills in 2014? Did he lie to any other financial institutions by inflating his net worth? Did he submit a false insurance claim? Did any members of a joint defense agreement, which included Ivanka Trump and previously included Cohen, suborn perjury? Did Trump break the law when he dangled pardons for Cohen after the April raid on Cohen’s home and offices, an issue that a source with knowledge says is being looked at by SDNY?

Here is a quick summary of eight legal headaches he presently faces.

It will be interesting to see what happens if, as is widely thought, Bob Mueller will himself testified in front of the Senate. If he does, this Mueller insider claims that we will call out Trump on his criminal obstruction:

Either way, if Bob Mueller does testify, it will be one of the most closely watched political back-and-forths since president Clinton’s attempted impeachment.

You know things are going crazy when Fox News presenters appear to be having a go at each other with some commentators and anchors seeming to have come to terms with the truth of the Trump presidency:

I could go on, but I do get the sense that things are heating up to a critical point mass, a tipping point, where surely even Donald Trump can’t continue, can’t politically survive. But, then again, nothing ever surprises me anymore with Trump.

May 6, 2019
My Interview on the Naked Diner Podcast
Next Post 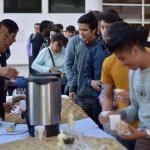 May 8, 2019 New Study: The Relationship between Religion and Redistribution
Recent Comments
0 | Leave a Comment
Browse Our Archives
get the latest from
A Tippling Philosopher
Sign up for our newsletter
POPULAR AT PATHEOS Nonreligious
1