Oh dear. I guess this means some incoming lawsuits. I hope so, at any rate.

This is from The New York Times:

Gov. Brian Kemp of Georgia signed one of the most restrictive abortion laws in the nation on Tuesday, effectively banning abortion after six weeks of pregnancy, when doctors can usually start detecting a fetal heartbeat.

Georgia is the fourth state to enact a so-called fetal heartbeat law this year. Like in other states, it is expected to face a swift legal challenge, which supporters hope will lead to a re-evaluation by the United States Supreme Court of the landmark 1973 ruling that made abortion legal nationwide.

Mr. Kemp, a Republican, said in a signing ceremony at the State Capitol that his administration is prepared for a court fight.

“Our job is to do what is right, not what is easy,” he said. “We are called to be strong and courageous, and we will not back down.”

The Georgia legislation is but the latest front in a wide-ranging battle over abortion rights being waged this year across Republican-controlled state legislatures in the Midwest and South. Conservative lawmakers see the realignment of the Supreme Court as presenting their best opportunity to overturn Roe v. Wade, the case that recognized a woman’s constitutional right to an abortion.

The Georgia law, which would take effect in 2020, prohibits most abortions once doctors can discern a fetal heartbeat, a milestone that occurs before some women know they are pregnant. In practice, the limit on abortion in Georgia will now be six weeks of pregnancy, instead of 20 weeks.

Exceptions are allowed to prevent death or serious harm to the woman, and in cases of rape or incest in which a police report has been filed.

Whilst everyone worries about Trump, all sorts of things get through. Pence is pulling the strings, no doubt.

May 8, 2019
NYT: Trump, Taxes and Being A Rubbish Businessman
Next Post 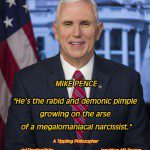 May 9, 2019 Quote of the Day: Nemo on Pence
Recent Comments
0 | Leave a Comment
"Wow, I don’t think there’s a single thing I could agree with. However, I’ll limit ..."
Geoff Benson Volunteers at New York CV Hospital ..."
"Knuckleheads are legion and everywhere. I'm comfortable covering the innumerable possibilities with "etc.""
Lex Lata Coronavirus Is a “Partisan Pandemic”
"And its position on such a list is relevant... why?Your response here looks like a ..."
C Peterson Coronavirus Is a “Partisan Pandemic”
"You can choose to open your eyes. To pay attention to the red ball. To ..."
fsck Pearced Off! #4 – Free Will
Browse Our Archives
Follow Us!