Yes, I know this isn’t a particularly original observation, but it is something I feel I have to say in light of the request to take LGBT people out of an anti-lynching bill. As I reported yesterday, a Christian group wants to be able to lynch gay people. One of the problems with this, out of a raft of many, is that it is highly hypocritical. These same people demand abortion be banned on account of a pro-life stance. These people claim there is a sanctity to human life. Apparently, however, this sanctity doesn’t extend to all humans but is reserved only for humans they deem to successfully qualified. Pro-life is, ultimately, a cherry-picked notion.

I will refer you to the masterful words that often get exhibited during such conversations. They are particularly powerful because they come from a Catholic nun, a member of a group of people whom you would normally associate with a rigid, pro-life stance. 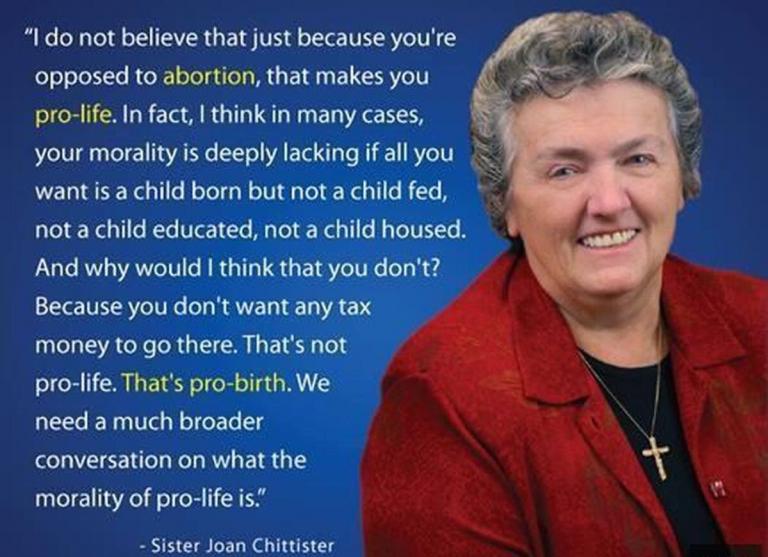 There is no aspect of life they are promoting the refusal to allow a woman to make a choice regarding her own body. Pro-Fetus works because a large swathe of the “pro-life” movement are the same people who support cutting funding to programs like WIC, food stamps, and other programs which generally help mothers and children. If they were really concerned with “life,” and not just the fetus, then they would aggressively commit themselves to make sure children have enough food to eat, a proper education, and a place to live. Since their concern for the fetus ends as soon as it is born, they are clearly pro-fetus.

Being pro-birth or pro-fetus is not the same as being pro-life. And yet the two positions appear to often be conflated.

Why, as I look out on the sea of signs at today’s the March for Life, do I see nothing about maternity leave, much less paternity leave? Why aren’t expansive parental leave policies front and center on every pro-life website, and on the lips of every pro-life politician?

Why does every speaker fail to mention contraception? Why isn’t sex education front and center on every pro-life website, and on the lips of every pro-life politician?

Why is adoption mentioned only in passing, if it is mentioned at all? As of this writing, MarchForLife.org’s “adoption” page still has “lorem ipsum” placeholder text. (Adoption was a focus of the 2014 march.*)…

The real argument is simply about the movement’s hypocrisy. If pro-life advocates genuinely saw saving unborn children as their top priority, then a significant number of them would also fight for a world in which all women and men can be confident that their children’s future will include education, food, and housing. Many would reject a political platform that cheers taxpayer funding of the military while simultaneously trying to cut health care funding—health care that might allow women to feel secure enough to bring a baby to term. And many would make contraception a central issue, instead of allowing religious prudery to take precedence over the unborn babies they are fighting for.

Let me leave you with a quote from the Bible, Matthew 6:5:

5 “When you pray, you are not to be like the hypocrites; for they love to stand and pray in the synagogues and on the street corners so that they may be seen by men. Truly I say to you, they have their reward in full.” 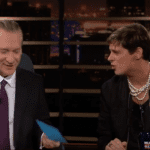 June 14, 2019 Bill Maher Roasted by Katie Porter
Recent Comments
0 | Leave a Comment
"False"
Linda Teenager Dies from Covid-19 Due to ..."
"When we talk about morality, we talk about oughts – normatively what we should, as ..."
Verbose Stoic Morality: Consequentialism and Coronavirus
"Bert’s quote wasn’t from FoxNews or a Liberty University spokesman, but from John Hopkins University, ..."
Geoff Benson Monoculture
"Or, conversely, you are overly sensitive to cussing and its presence triggers you. Why is ..."
3lemenope Teenager Dies from Covid-19 Due to ..."
Browse Our Archives
Follow Us! 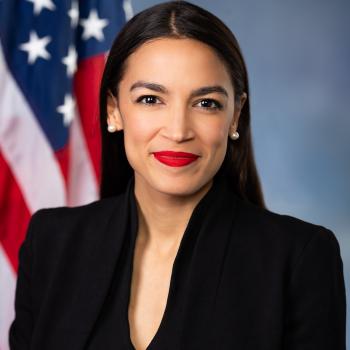 Nonreligious
AOC Slam Dunks on Faith. Jesus Would Have...
A Tippling Philosopher
TRENDING AT PATHEOS Nonreligious