Not Seeing OmniGod through Philosophy and Logic: Adam & Eve

I am going to split up my opening chapter to the book over a number of posts here. All of that which I will excerpt has been the subject of various posts over time. After all, you are my sounding board. Here goes. This is the third piece.

Let’s put this design fault into biblical context. God creates Adam and Eve in this supposedly perfect scenario. They have been chosen to represent humanity in a big test: the test of not eating a fruit from the Tree of Knowledge. In other words, before eating from a fruit that gives them the knowledge of what is right and wrong, they have to know that it is wrong to disobey God and eat some forbidden fruit.

Okay, let’s let that issue slip and carry on with the story.

So, Adam and Eve represent humanity in this test. God presumably knows in advance the result of this test, but he picks Adam and Eve to do it anyway, and to knowingly fail. In other words, God is admitting a glaring design fault. If Adam and Eve are representative of humanity, then any given human taking that test would have failed, and we are all inherently faulty. This throws perfect design and creation down the pan.

If, however, Adam and Eve are not representative of humanity, then God has chosen non-representative people to take a test and fail, on account of which all other people, given the Fall, are punished. It’s bad enough to know we are being punished for the choice of Adam and Eve because we are all equally as shoddy as they are, but it’s quite another to think we are being punished for the wrongdoing of this brace when we could have passed the test ourselves!

Quite a two-horned dilemma. 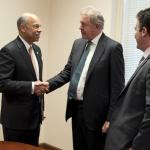 July 10, 2019
Concerning Kim Darroch: Trump Is a Child
Next Post

July 11, 2019 Mother Mary Joins the #MeToo Movement
Recent Comments
0 | Leave a Comment
Browse Our Archives
get the latest from
A Tippling Philosopher
Sign up for our newsletter
POPULAR AT PATHEOS Nonreligious
1