On Gun Control and the Second Amendment

The way I like to spend my downtime relaxing is to have endless debates on Facebook. In this case, I was debating gun control and regulation last night. I’m going to post some of my thoughts on this to see what you think.

I am not going to concern myself with the pragmatic implications of gun regulation given that there are so many weapons in circulation in the US at the present time. Nor am I going to talk about the data concerning gun violence. I will briefly mention that this should include accidental injuries and death, as well as suicide. The only other two things I will mention before my main piece are the banning of CDC research as a result of the Dickey Amendment back in 1996, and lobbying. I have previously talked about how lobbying is legalised corruption. If I was to be in government in the States, then I would absolutely transform the ability to freely lobby as they do and I would allow the CDC and anyone else to research gun violence as thoroughly and vigorously as possible.

But, on to my main point today.

GA: I think we should be entitled to have weapons in our personal possession.

RA: Okay. But where do you draw the line? Do you think that every citizen in the US should be entitled to have a nuclear weapon?

GA: Of course not. Don’t be ridiculous.

RA: I’m not being ridiculous. This is actually a really important distinction. So you disagree that they should be able to have nuclear weapons but agree, presumably, that they should have at least the most ineffective gun – let’s say a flintlock pistol. Somewhere along that continuum you stipulate what is acceptable and what isn’t, I presume?

RA: So this line should most properly be defined by what they need is, right?

GA: I think I would agree. This is where the Second Amendment comes in. “A well regulated Militia, being necessary to the security of a free State, the right of the people to keep and bear Arms, shall not be infringed.”

RA: So here comes the discussion. But, for the sake of argument, let’s ignore the debates around what a regulated militia means. This is about the security of the free State. So, in other words, one presumes this is about fighting the tyranny of a bad government.

GA: Yes, that’s how I understand it.

RA: So, somewhere along the continuum from flintlock pistol to nuclear warhead, we have drawn the line. At the moment, it is around the semiautomatic rifle. Citizens in the US are not allowed proper machine guns. That is the arguably arbitrary line that we have drawn.

RA: The problem is this. Although you might be able to be a thorn in the side of a tyrannical governments with pistols, rifles and the odd AR-15, it will be difficult to defeat a well organised tyrannical army (that somehow bypassed democratic checks and balances) that has nuclear warheads, Apache gunships, tanks, cannons, heavy machine guns, RPGs, grenades, and pretty much every single weapon you could ever imagine at their disposal. To properly defeat an army like that you would need at least as good weapons as them, or near enough.

RA: That means that citizens should, indeed, be entitled to heavy machine guns, tanks and even nuclear warheads. The level at which we draw the line should be entirely defined by why we have the ruling in the first place. And that is, as you correctly say, the Second Amendment. But the Second Amendment was drawn up hundreds of years ago when the government only had muskets and similar. These days, things are different. Really, if you are a gun advocate, then you should be arguing for the use of Apache gunships by localised militia!

And so it goes on.

At some point, for pragmatic and intuitive reasons, we draw a line over which we prohibit weaponry. But, if we are to take the Second Amendment seriously, that line should be wherever the line is for the Army. You see, the line doesn’t stipulate the type of weaponry but a well-regulated militia with a right to bear arms.

This isn’t actually a case of the Sorites Paradox, as I love to invoke, because we are not drawing an arbitrary line (although that is how things stand at this moment) but we are trying to align the Second Amendment with the state of play in society at the moment.

And what this shows is that if you attempt to do this you have an utterly ridiculous situation that is completely unmanageable and exceptionally dangerous.

My conclusion? That the Second Amendment is a pretty ridiculous constitutional statement for modern society and should be amended the hell out of there.

But I can’t see that happening any time soon.

As a result, this is why we have an impasse.

July 17, 2019
Not Seeing OmniGod through Philosophy and Logic: God Loves Abortion
Next Post

July 19, 2019 Federal Court Bans School-Sponsored Graduation Prayers in South Carolina School District
Recent Comments
0 | Leave a Comment
Browse Our Archives
get the latest from
A Tippling Philosopher
Sign up for our newsletter
POPULAR AT PATHEOS Nonreligious
1 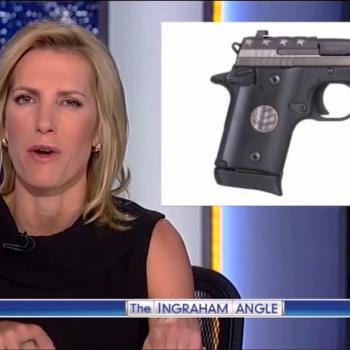