The Recent Shootings and God

If you read this at any point forward in American time, there will have been a recent shooting, sadly enough, so the title will be perpetually relevant.

The recent mass shooting atrocities, like any evil or suffering, need to be understood by religious people in the context of their god. In terms of OmniGod, all-powerful, -knowing and -loving, the shootings are most likely to be answered in the following ways:

Friendly Atheist has documented a few positions recently exhibited. Lt. Gov. Dan Patrick blamed video games and a lack of forced Christianity, which would fit into both 1) and 2).

Christian author, Eric Metaxas (the sort who conflates gays and paedophiles) blamed the “spirit of the anti-Christ”. His Tweet reasoned as follows:

The spirit of the mass-murder is the spirit of anti-Christ. Instead of pointing fingers at each other & sharing in that foul spirit, let us turn to God in repentance. Can it be that He has allowed this evil so that we will return to Him in prayer & repentance? #jesus #severemercy

This appears to be part of 2) in the context of having moved away from God in lax belief, and being punished/encouraged back to God through this very violent example of bloodlust.

It’s a horrible argument that shows that God uses people instrumentally to achieve an end; in other words, God is a consequentialist and seems to favour this most secular of moralities.

It also adds a fourth option: Satan. God’s nemesis is the cause of such suffering, if you believe in a real and tangible devil-figure.

Of course, as I have amply documented, the Satan thesis is terminally problematic, not least because if God was omnipotent, he could destroy Satan in the click of a finger. But he doesn’t and so it appears that Satan is willed by God and therefore enacting god’s desires in some manner. Satan is God’s middle management executive.

All told, not a single option is attractive. The good ole Problem of Evil really is still a problem. 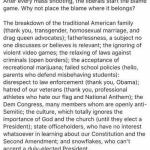 August 7, 2019 The Many Christian Responses to the Shootings
Recent Comments
0 | Leave a Comment
Browse Our Archives
get the latest from
A Tippling Philosopher
Sign up for our newsletter
POPULAR AT PATHEOS Nonreligious
1

Nonreligious
Surveying the Rubble of the Ruins Left after...
A Tippling Philosopher

Nonreligious
The Shameful 43
A Tippling Philosopher
TRENDING AT PATHEOS Nonreligious