The Many Christian Responses to the Shootings

The Many Christian Responses to the Shootings August 7, 2019 Jonathan MS Pearce

I talked about the different categories of explaining the shootings in the context of the Problem of Evil in a previous post. The Christian Post, for example, preferred to advise people on how to react to the tragedies, rather than who or what was to blame and how they should be explained. Although they did also reference mass shooting research that pointed out these commonalities:

One: The vast majority experienced early childhood trauma and exposure to violence at a young age.

Two: Nearly every mass shooter reached an identifiable crisis point in the weeks or months leading up to the shooting.

Three: Most of the shooters studied the actions of other shooters and sought validation for their motives.

Four: They all had the means to carry out their plans by obtaining weapons legally, illegally, or from family members.

When it comes to God, here are your general options:

With that in mind, I will try to document a range of answers actual Christians have given (thanks to Friendly Atheist for reporting many of these):

Last May, after an incident, he blamed abortion and video games and unarmed teachers and too many entrances in schools and a lack of forced Christianity. In 2016, just after the Pulse nightclub massacre, he tweeted a Bible verse that said “A man reaps what he sows.” (He later deleted that tweet without apology or explanation.)…

Appearing on Fox & Friends, this morning Patrick got plenty of attention for blaming video games… even though the shooter made it clear he was following through on Donald Trump‘s anti-Hispanic rhetoric. But that’s not all he said.[Source]

The Texas Lieutenant Governor says it's not firearms or white supremacy that caused yesterday's massacre in El Paso, it's that kids don't pray in school anymore pic.twitter.com/lNedl0rg7U

…Christian author Eric Metaxas, last seen comparing gay people in love to pedophiles, is chiming in with his own brand of faith-based bullshit.

This morning, he blamed the shootings on the “spirit of the anti-Christ” and then offered an odd justification for why God allows such violence to continue even if He has the power to stop it. [source]

The spirit of mass-murder is the spirit of anti-Christ. Instead of pointing fingers at each other & sharing in that foul spirit, let us turn to God in repentance. Can it be that He has allowed this evil so that we will return to Him in prayer & repentance? #jesus #severemercy

Ohio State Representative Candice Keller, a Republican from an area about 30 minutes south of Dayton, offered her own explanation for why a young man murdered nine people and injured more than two dozen others later Saturday night…. 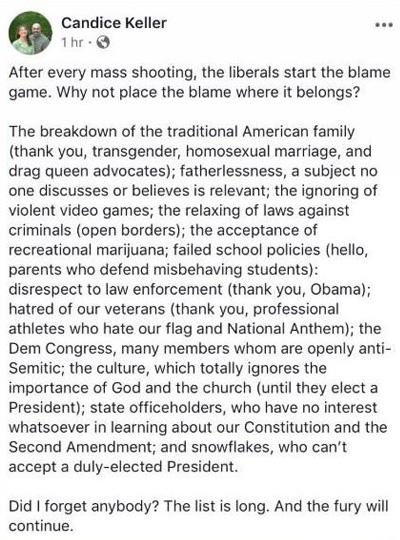 Mike Huckabee: Mass Shootings Are Caused By “Disconnecting from a God”

It’s been a while since we’ve heard from former Republican presidential candidate Mike Huckabee, but he was back in old form this morning on FOX News Channel, where he blamed godlessness for the mass shootings that occurred over the weekend: [source]

Right-wing commentator and conspiracy theorist Chris McDonald is the latest Christian to chime in on the real explanation for the mass shootings that took place over the weekend in El Paso, Texas and Dayton, Ohio.

The good news is that he’s not blaming gay people. But instead, he’s blaming the Deep State… for apparently trying to stop people for worshiping God. [source]

Mike Huckabee: Prayer Is The “Only Thing” That Will Stop Mass Shootings

Despite all those who are denouncing the idea of prayers for the victims (do a Google search for “Thoughts and prayers are not enough” and see how many hits you get), I will continue to pray for the victims and their families and for an end to this mindless violence, and I hope you will, too. In fact, amid all the finger-pointing and blame-laying and repulsive attempts to turn these tragedies to political advantage before the bodies are even cold, I would posit that the lack of thought and prayers is probably the single biggest factor in what is behind them….

Until then, passing more laws and pointing more fingers is just rearranging the deck chairs on the Titanic. That’s why I will keep ignoring the scoffers and saying prayers and urging everyone to join together and do the same.

It’s not a meaningless gesture. It’s the only thing that’s ever really going to help.[emphasis in source]

Pastor Jason Morriss: America’s most powerful leaders, including President Donald Trump, have to be held responsible for their rhetoric and ideas

Some pastors, like Morriss, forcefully argue that America’s most powerful leaders, including President Donald Trump, have to be held responsible for their rhetoric and ideas, including vilifying Hispanics and immigrants, the very people mentioned in the manifesto allegedly connected to the El Paso shooting. “If you look at the current propaganda coming from Washington, you might believe that dark-skinned people, and certainly immigrants, ‘bad hombres,’ are the dangerous ones,” Morriss said. “This is not a foreigner issue. This is not an immigrant issue. This is the violence we have made a home for.” [source]

Robert Jeffress, pastor and member of Trump’s evangelical advisory council: “This is the problem of evil.”

“I think it is wrong to assign blame to any party or any candidate for this problem,” Robert Jeffress, the head pastor at First Baptist Church in Dallas and a member of Trump’s evangelical advisory council, told me. “This is the problem of evil.”

Repeatedly throughout his candidacy and presidency, Trump has spoken about immigrants and asylum seekers, especially from Latin America, as “invaders.” He has also derided Mexicans as “rapists” and “criminals.” But Jeffress does not believe that the president is at all responsible for creating an atmosphere of violence. “If you listen to what the president is saying—contrary to some in the mainstream media—he is not anti-immigrant. He is anti–illegal immigrant. And there is a big difference between the two,” Jeffress told me. “I’ve known the president for four years. He’s a friend of mine. I’ve seen him in a number of different situations. And I’ve never seen one scintilla of evidence of racism in him.” In an address to the nation today, Trump did take a unifying tone: “The shooter in El Paso posted a manifesto online consumed by racist hate,” the president said. “In one voice, our nation must condemn racism, bigotry, and white supremacy. These sinister ideologies must be defeated.”  [source]

Let me know of any other Christian reaction to these shootings and I will add them here.

August 8, 2019 God's Divine Foreknowledge, His Culpability and the Problem of Evil
Recent Comments
0 | Leave a Comment
Browse Our Archives
get the latest from
A Tippling Philosopher
Sign up for our newsletter
POPULAR AT PATHEOS Nonreligious
1