Act & Potency: Responding to a Critic

Some weeks back, I posted a short piece on act and potency, “Criticising the Idea of Potential and Actuality in Natural Law Philosophy” in which I quoted extensively from a book I am presently editing by Gunther Laird.

Recently, I have received a response on this (“Response To A Tippling Philosopher On Act and Potency”) from Harrison Jennings at Quaestiones Disputatae.

Whilst Jennings admits that conceptual nominalism is incompatible with Thomistic philosophy, which I assert in my post, it is not the thrust of his criticism:

I did not argue for it there because I have done that in so many other posts here that it would have been simple repetition and was actually unnecessary for the point of the piece, unnecessarily adding to its length.

My main point in the piece was to undercut the differentiation that Thomists have between actuality and potentiality, such that something (X) could be potentially A or B; I say, under causal determinism (adequate or otherwise), X will only ever be A, and so there is no potential (in reality) to be B. The only thing that allows for that potentiality is from human theorising given an incomplete knowledge of all of the variables.

I talk about this in terms of a simple coin toss (there is a potential to be heads or tails, but knowing every single variable, it will predictably always be, say, heads in causal circumstance Y), and in terms of Laird’s example of a butterfly:

This butterfly could be of this particular colouration or that particular colouration, it could be of this size, or that size. We line up all the theoretical futures that this butterfly could have given that we don’t know the initial conditions with our limited human minds. However, if we knew every single condition down to every single wave function of the world, then we could predict with surety what the outcome would be.

Let’s take his example of tossing a coin. Pearce argues that there is not really a “potential” for the coin to turn up either heads or tells, since the outcome is already causally determined. Let’s say, for the sake of the argument, that this is correct. It still does not follow that the coin does not really have an intrinsic, ontological potentia for its determined outcome. Indeed, it must have this potentia, if the outcome is to happen at all. Suppose the coin is causally determined to turn up heads. We still must say that the coin has the intrinsic potentia to turn up heads; otherwise it wouldn’t be able to turn up heads at all. Even if we were to suppose that the coin lacks any other potential (i.e. cannot possibly have any other outcome), it still must have at least that onepotentia, the potentia for its determined outcome. This is so merely by virtue of the fact that, at the present moment (before we toss the coin), the coin has not actually landed heads up yet.

Here, to me, we have the ungrounded assertion, in my opinion, of any kind of meaningful account, ontologically, of “intrinsic potentia”. It sounds lovely, but it is, to me, a mere assertion that this object, a coin, has some real, ontic property attached to it of turning up heads in causal circumstance (CC) Y. Somewhere, in some realm, this particular coin has the property of H in Y. And if it is subsequently flipped again, it has T(ails) in Z. And it also has the same potential to be at a 1-degree slant on the horizontal plane. Indeed, I can name any potential (possibly infinite) property it will have in the future and this will be its intrinsic potential. All that this means, however, is that “intrinsic potential” just means “future property”. “I have the power to do this” becomes “I will inexorably do this”.

Meh. With all due respect.

I’m not sure this contains any real usefulness, certainly in terms of the Thomistic framework. It’s potential is its future, which is necessarily so.

Here, it looks like we will have to get into definitional talk as he seems to want to make a hash of modal language. The Oxford Dictionary says of potential (n):

1. Latent qualities or abilities that may be developed and lead to future success or usefulness.

1.1 (often potential for/to do something) The possibility of something happening or of someone doing something in the future.

Jennings would be synonymising “possible” with “necessary”, such that to say something has a potential to be something (heads or tails) means the same as to say it is necessarily heads, because its potential is necessarily heads. You are stripping modal language of its modality. Jennings states, “If something must be the case, then necessarily it also can be the case” but I don’t buy this. You would never say of anything “X can be Y” and strip X of all other possibilities. Bob can be funny means that very often, or at least some of the time, he is not funny. It doesn’t mean that he is funny literally every moment of his life bar none. And reversing this, as Jennings looks to do, is merely meaningless. If Bob is literally funny every single moment of his life, then to say he can be funny is to equivocate on, or more accurately misuse, the word “can” in its modal form.

To say 2+2=4 is not to say 2+2 can equal 4 (given regular maths understanding). It means it does equal 4. Always. And forever. It doesn’t have “an ability” to, but “an ability” not to; it means it necessarily is or does.

It becomes even more interesting when you look at the universe in terms of how most modern physicists do: as a 4-dimensional block universe. Jennings’ use of potential requires, it seems, an A-Theory understanding of time, in a linear past (gone), present (fact), future (yet to be [potential?]). These days, however, most philosophers and scientists do not adhere to the A-Theory of time – indeed, only 15.5% of philosophers do, correlating unsurprisingly with the proportion who are theistic, give or take. On the other hand, when harmonising special and general relativity, in a block universe, the whole thing is factual. There is no potential. There just is:

So if the future and past are already encoded into the block universe we inhabit – how does that account for our human experience of life, of our inexorable movement through time?

From this block time perspective, time, as we experience in the block universe, is an illusion. “It’s not a real, fundamental property of nature,” says Cortês. The ticking of time, our experience of time passing, is only because we are stuck inside the block universe, moving forward along the dimension of time. “The fact that we experience moving forward in the block but not outside it comes from the fact that the block picture treats time just as another spatial dimension, and we can step outside of it. Time is not pervasive.”

This leads to fundamental questions that cosmologists today are addressing in their theories describing the nature of our Universe. If our Universe is like this block universe, then everything – past and future – has happened and our experience of time is just a mathematical artefact arising from the equations describing the Universe. [source]

In other words, to uphold Thomism, the Thomist has to disprove or counter the block universe (theory), and of course there are detractors, it’s just that I never see Thomists getting involved here. I could be wrong.

But to get back to the potential/actual discussion, it remains to be seen as to what use this is to the Thomist. If all things (given causal determinism, of course, that they would anyway reject) – including brain states and thus resulting behaviours – have “intrinsic potentiae”, then where does this get the Thomist? If we are denying alternative potentiae in saying that all things have actuality and the future actuality is necessarily dependent on previous actualities, then surely the whole Thomistic framework, as an endeavour of moral philosophy, is rendered impotent?

November 11, 2019
The Problem of Evil, Skeptical Theism and "Good Reasons"
Next Post 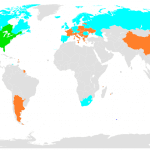 November 15, 2019 Religiosity and Anti-Vaxxers
Recent Comments
0 | Leave a Comment
Browse Our Archives
get the latest from
A Tippling Philosopher
Sign up for our newsletter
POPULAR AT PATHEOS Nonreligious
1