His point (in response to “So, does God punish the children for the sins of the father, or not? The message seems to be rather fuzzy.”) was:

In a certain sense He does. God “punishes” the children with the effects of the father’s sins.

In other words, the children are not punished for their guilt, for they have
none in regard to the father’s particular sin. But they can feel the repercussions of the other’s sin. For example, the rape victim feels the effects of the rapist’s sin. Sin is not a personal matter, at least not in its effects.

For example, the rape victim feels the effects of the rapist’s sin. Sin is not a personal matter, at least not in its effects.

Also, God is the architect of the entire system. So when he was creating the rules by which the universe was to function, either he chose to create the rule that the effects of a parents’ sins would be felt by the children, or he was impotent to design the universe differently. Please enlighten me as to which of those two options your theology tells us is the case.

Adam’s curse (Genesis 31:7) and the generational curse (Exodus 34:7) can be interpreted as God simply telling humans what inevitable consequence will result from their sin; telling them how the cause-and-effect metaphysics of the universe functions in response to sin. But that does nothing to remove His responsibility, since according to your theology, God is the one who decided what those metaphysics would be.

“So your analogy would imply that God is incapable of preventing children from feeling the effects of their fathers’ sins.”

No, it does not.
…………..
“… either [God] chose to create the rule that the effects of a parents’ sins would be felt by the children, or he was impotent to design the universe differently. Please enlighten me as to which of those two options your theology tells us is the case.”

Eric points out the problems:

Thanks for the straight answer. You realize your answer completely undermines your “in a certain sense” and “not punished for guilt” arguments above, right? God is doing the punishing through his free-will selection of the metaphysics he uses to run the universe….

Is it baby rat’s fault he got shocked, or mine? Is baby rat’s suffering just – i.e. did he deserve it?

The net closes in. See replies:

It’s your “fault” for not designing the skinner box to be heaven, with the two rats first coming into being with immediate, perfect, and eternal bliss there.

But I guess I sort of understand your mysterious ways.

You’re right, it’s my fault. Which analogously means it’s God’s fault the child pays for the sins of the parent. Because God set up the universe intentionally choosing to put that very crappy and horrific rule in place. According to your theology, he designed the box we’re living in to give shocks to our kids every time we do something wrong. And that’s horrible.

This is the crucial moment. This is where See has to bring in a decent and proper defence in order to continue to hold his position. If he doesn’t, a massive hole is blasted in his theological and moral framework. This is pretty devastating stuff for his understanding of God and God’s moral culpability if he has no rational and reasonable riposte.

So See is under pressure to provide now. And provide he does.

You and @Jonathan MS Pearce should write a new blockbuster based on your simple but profound theological proof.

Well, maybe not a whole book, because your proof can be boiled down to a bumper sticker:
You gotta boo-boo?
Congrats, you now know Jesus (and his dad) are BS!

What is fascinating to read, (and the thread goes on) as an outsider to this conversation, is the technique and tactics on show. Now, See doesn’t do this consciously, I proffer; this is just instinctive bad debate technique from someone who is not only a rank amateur, but (more importantly) someone who genuinely is not interested in finding out the truth about philosophy, God and everything.

If I come up against any point that is even remotely problematic to my worldview, I feel the absolute necessity to bottom it out. I need to reconcile at least something; I have work to do. I cannot simply leave it as it is. In See’s position, I would simply have to counter the arguments, or change my position.

Here, we see See simply shrug his shoulders, throw in an insult or two, and move on. He doesn’t care that there are terminal holes in his theology. Or he doesn’t even try to find out how those holes might be sured up. I suppose this is the very definition of blind faith.

I just simply couldn’t live that way. That would be one philosophically existential crisis after another. 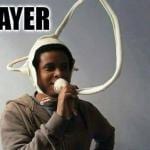 November 22, 2019 Friday Fun
Recent Comments
0 | Leave a Comment
Browse Our Archives
get the latest from
A Tippling Philosopher
Sign up for our newsletter
POPULAR AT PATHEOS Nonreligious
1