Although the final vote is probably not until Wednesday, the outcome is settled. Trump will be acquitted. This is almost the best possible outcome for Democrats…and everyone else who wants to kick Trump out of the White House.

It would have been a bit better if we could have heard what John Bolton had to say, but as Senator Lamar Alexander acknowledged, it wasn’t necessary. It was clear, he said, that Trump was guilty of using Ukraine foreign aid to pressure them to announce an investigation of the Bidens. And he acknowledged that it was wrong. But he, and other Senators, claimed that it didn’t rise to the level of “high crimes and misdemeanors” required by the Constitution. That, of course, is a matter of opinion, and the opinion was sharply divided along party lines in Congress, as it is among the American people. Bolton’s testimony would not have changed any minds in Congress. But it might have changed the minds of some voters…those that were not already set in concrete. Bolton is a bellicose blowhard, but most people probably think he is an honest man. He doesn’t lie or try to fool people. What you see is what you get. His testimony could have solidified the case against Trump, and that would have hurt Republicans this fall.

Removing Trump from office would leave Pence in charge. After what he tried to do in Indiana, pushing through an anti-abortion law that was declared unconstitutional, putting him in the White House is a frightening thought. What would he try to do in the rest of this year before the elections? And, he could be a more formidable candidate than Trump for the Democrats to take on.

The Republicans in Congress who are up for re-election this fall are going to have a lot of explaining to do about their votes. Beating Trump is only part of the problem. Democrats should not be disappointed or discouraged by this result.  Instead, they need to get busy and take advantage of the opportunity their opponents have (un)graciously provided to them. The big problem they face is picking the candidate who can best oppose Trump. They don’t have a young, charismatic Barack Obama in the field of candidates. The well-qualified people are (arguably) too old or too liberal, and the younger ones, who have great future potential, are not yet credibly qualified to be President.

There is still a possibility that Bolton will go ahead with the publication of his book. Trump’s lawyers are threatening him with prosecution if he publishes it. They claim that some of the material in it is Top Secret.

I did a little research on that. Believe it or not, there are no laws established by Congress to determine the classification of documents. It has been determined historically by Executive Order from the President! There are some general ground rules…classification cannot be used to hide documents that would prove embarrassing to government officials, nor to hide illegal actions. (See Note at end) I would think that would cover this case. Trump should not be able to declare that all of his private conversations with other government officials are Top Secret.

Bolton has said that he doesn’t think anything in the book is classified material, so if he goes ahead and publishes it, then we will see what the White House does about it.

Of course, the contents have already been leaked, but leaks of classified materiel…which have happened often…have usually not been prosecuted unless they constitute a grave danger to national security. It will be interesting to see how this plays out. Will Bolton back down, or will he call their bluff? Trump has said some awful things about him in the past few days, and Bolton doesn’t seem to be the kind of guy who will take that and not fight back. This is all good news for Democrats. The more it keeps this in the public eye, the better. 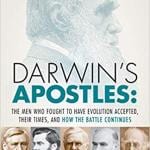 Nonreligious
Quote of the Day: (((J_Enigma32))) on "Evolution is...
A Tippling Philosopher