I am appalled at what is happening in my country. All my life, up to now, I felt that most of the people in our government, and the people who elected them, were reasonably intelligent and well-meaning. I didn’t always agree with some of them. Some of them had a worldview that was different from mine, but they had at least a modicum of a rationale for their views.

In recent years, I began to doubt this, as religious belief and right-wing views seemed increasingly off-the-wall. The latest global panic over the virus has convinced me that many of our citizens are not rational, thinking people. Our government, at all levels, was a little slow in reacting to the threat, and imposing the necessary quarantine and social separation mandates. But now they are in place in most of the country, although they are not enforced in major sections, especially in the central and southern areas. Churches seem to be exempt. Pastors in evangelical churches are still urging their people to attend services. A right wing Congressman urged people to go to church, and visit their favorite restaurant, in defiance of the mandate. The result has been mass infections in some cases. What are those people thinking? Do they really believe that their god will protect them? Apparently some of them do.

Many still believe, as Trump and Fox have said repeatedly, that this is all a hoax, perpetrated by pointy-headed scientists and, of course, those evil Democrats, who are just trying to dethrone him in the election this fall. There are rumors that he is planning to postpone the election indefinitely, now that he finally acknowledges that the virus is a real, existential threat. This is consistent with what he has said in the past about term limits. He thinks he should be President for life. What astounds and appalls me is that many people agree with him, and are ignoring the danger of the virus. If they were just endangering themselves, I would say, okay, let the process of natural selection weed out the idiots, but when they refuse to isolate themselves, they threaten the rest of us. Our society is dumbing down. A large part of our citizenry is more ignorant, more superstitious, more bigoted, and more tribal than our ancestors were a hundred or more years ago.

I truly believe that our nation is in crisis. The rest of the world will survive this, but I am not sure that the United States will exist in ten years.

I will probably be gone by then, but I am sad for my children and theirs, and all the other intelligent and caring people in this country. The madmen have taken over, and they may destroy us all. 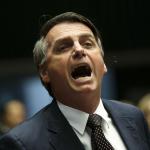 March 24, 2020
Bolsonaro, Brazil's Trump, Appears to Have Coronavirus
Next Post

March 26, 2020 Comparison: Flu vs Coronavirus
Recent Comments
0 | Leave a Comment
"Dogs think you are a god, Cats think they are."
Boreal Dogs and Cats
"First a caveat, I'm an agnostic so I don't believe any of it. But theologically ..."
Ken Baker Problems with Mark’s Crucifixion Death and ..."
"I used to have a toy Yorkshire Terrier that weighed all of 5 pounds soaking ..."
Tawreos Dogs and Cats
"Yeah, I think We're through the looking glass here. This is far beyond "Politicians have ..."
Pofarmer Vouchers Are Not Free Exercise
Browse Our Archives
get the latest updates from
A Tippling Philosopher
and the Patheos
Nonreligious
Channel
POPULAR AT PATHEOS Nonreligious
1