“Numbers are continuing to rise…”

You might be forgiven for thinking this was an assessment of the death statistics (in the US); after all, this was a comment by the POTUS. But no, it was on Twitter and it was, yet again, a comment from Trump rather narcissistically bigging his own ego up. Just what the nation needs, right?

“President Trump is a ratings hit. Since reviving the daily White House briefing Mr. Trump and his coronavirus updates have attracted an average audience of 8.5 million on cable news, roughly the viewership of the season finale of ‘The Bachelor.’ Numbers are continuing to rise…

Is this presidential? It is certainly Trumpian.

Nothing surprises me any more. What I find particularly pertinent now is that various news organisations are presently fact-checking Trump’s claims at the time he is speaking. CNN do this really well live with Daniel Dale. In written form, here are some excellent examples:

CNN’s report from 3 days ago.

CNN’s report from 2 days ago.

CNN’s report from 1 day ago.

Others are doing this too, as if fact-checking Trump is utterly normal – that there is a normalisation to his lies and that his inaccuracy is what is now to be accepted. This devaluation of everything Trump says is taken for granted in the UK, where the majority of people have a low opinion of him, but should be worrying for his supporters in the US; that said, nothing appears to worry them. 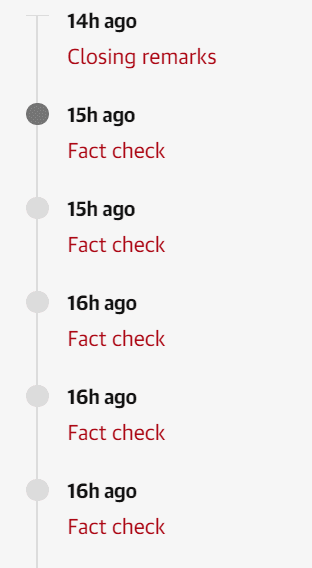 The Guardian: “Five of Donald Trump’s most misleading coronavirus claims”

Mind you, he does knows hits stuff. According to him.

In times of a pandemic, it is incredibly important to get lines of communication open and accurate. Yes, optimism has its uses in a battle for hearts and minds but this needs to be managed carefully, not just as off-script and hopeful stream of consciousness.

In this relentless news cycle, we shouldn’t expect a relentless fact-checking service for the most influential man on Earth.

March 30, 2020 Pearced Off! #2 - Doxastic Voluntarism
Recent Comments
0 | Leave a Comment
"You think women require your chivalry. You're a sexist pig.Go back to the 1950s -- ..."
Lord Dude Ted Cruz and Racist Voter IQ ..."
""Rights" exist insofar as we invented the concept as you mentioned, labeled it, & imbued ..."
al kimeea Your Foundations Are Wrong; Your Conclusion ..."
"Basically, this is the argument made in Sapiens. I remember being a bit shocked at ..."
Cynthia Your Foundations Are Wrong; Your Conclusion ..."
"You called it out of the barn with your presumption.I'm in favor of banning assault ..."
Lord Dude Your Foundations Are Wrong; Your Conclusion ..."
Browse Our Archives
get the latest updates from
A Tippling Philosopher
and the Patheos
Nonreligious
Channel
POPULAR AT PATHEOS Nonreligious
1