The Cost or Value of Human Life

Coronavirus (CV) is talk of the town, affecting all of our lives. I have previously written about how the statistics are hugely important, but also somewhat unreliable. They are important because it is on these stats that public policy is based or informed. There are so many variables and unknowns that it makes prediction difficult to do accurately.

One of the biggest question marks hangs over fatality rates. (again, see “Overestimating Death Rates: Comparing Fatality Rates of Coronavirus & the Flu”). In summary, fatality rates for regular flu are ~0.1% (though this could be an overestimation) and the rates for CV started in the region of 3.4%. But this didn’t take into account mild or asymptomatic carriers. This was for people already diagnosed (who had to be serious enough to be in hospital in most cases). The stats were skewed. As I discussed, it is hard to know how much they are skewed by since there are mitigating factors acting both ways.

What is worth setting out now, at the beginning, is that people are tangibly dying nd healthcare systems, depending on where you are, are being swamped. Italy has now lost over 60 doctors to this virus.

Now, get ready for an even more morbid conversastion.

A new Lancet Infectious Diseases report suggests that the number for confirmed cases should be 1.38% and for those including unconfirmed cases is 0.66%. This is far lower than initially thought, though still considerably higher than flu (by over 6 times. if the flu stats are themselves not overestimated).

What is also an interesting factor to consider is what is known as “excess deaths”. Take 20,000 predicted UK CV deaths. On these figures, 98% of UK deaths had underlying health conditions. A UK government advisor suggested last week that between 50-66% of these would have died anyway.  In other words, there are conversations of causality – what killed these people, CV or, say, a heart problem? Both? I spoke about this in my piece, “So, Have I Killed Someone?” where it is really difficult to tease apart causal influences in a given event (death).

The excess deaths are those seen as over and above the deaths that would have happened anyway – deaths that CV “really is responsible for”, arguably.

Let’s superimpose these stats onto US predictions for the sake of discussion, but remembering that these figures are hugely speculative and depend on all sorts of variables and unknowns. Let’s say that 100,000 people are going to die (arguably at the more conservative end). Now, we can use this figure, or an adjusted figure of 33,000 for excess deaths. Let’s park this for now.

Many people argue that there is a sanctity of life and that you can’t put a price on life. 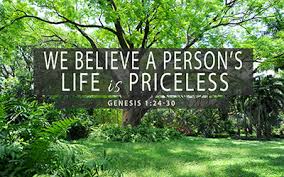 Religious people, and people in general, often talk about how priceless life it. Life has a sanctity. You cannot apply some kind of consequentialist ideal to it and moral decisions concerning life. However, whether you live in a single-payer healthcare system or an insurance-based one, you are faced with the same problem. Let me explain.

It may not sound nice, but we quantify life in all policy-making decisions. Take NICE (The National Institute for Health and Care Excellence, a non-departmental body who decides on what drugs and treatments the NHS uses – i.e., how much they should spend on a given treatment). NICE have formulae for assessing different treatment pathways. For example:

Typically, the health economic analysis will have looked at a variety of elements to determine the incremental cost per quality adjusted life year (QALY) gained. To calculate cost the health economist uses estimates of unit costs and levels of service use. The costing tools include, where relevant, the same costs, activity levels and assumptions to ensure consistency.

What this essentially means is that there will be a cost limit whereby NICE will say to the NHS, “We’re not going to advocate this treatment as it is too expensive”. This actually happened with me; there were no drugs for Primary Progressive Multiple Sclerosis last year at all because NICE turned the Ocrevus manufacturer away for being too expensive. They came back several months later with a lower price and more data, and NICE finally accepted it. As a side political note, 25% of the world’s drugs purchases are benchmarked against NICE so in a post-Brexit trade deal with the US, NICE will be the first thing on the table, mark my words. Getting rid of NICE will be a massive problem for the health system and taxpayers in the UK and 25% of the world, but will be a boon for US drugs companies. I can’t stress how important this is.

Anyway, stay on target, Pearce. So, NICE will say a drug or treatment is too expensive. We might invoke the Sorites Paradox: when does a sand dune stop being a sand dune after we take successive grains of sand away? When does a life become affordable in treatment terms as we keep reducing the cost of a given treatment.

Let’s say someone B has X disease or condition; it costs $20 trillion dollars to cure them. Is this an acceptable cost to either taxpayers or insurance premiums for others to take as a cost? If I said to you that your insurance premiums or tax has to increase by 5000% to cover the cost of keeping B alive, would you pay it? You don’t know B, but their life has the same intrinsic value, arguably, as anyone else in the world, or your country. To save their life, someone, people or group needs pay $20tn. “No way! That’s way too much!”

Pragmatically, a life have a value. Does this value change depending on what age and what underlying health situation a person is in? What if you are retired, or in your working prime? What quality of life can a treatment give, as NICE calculate? Does this change given the context of B?

These are complicated questions and answers that don’t seem to be particularly objective. At some point, someone in these decision-making positions has to assert an axiom or a brute fact.

It might sound lovely to say life is priceless, but in reality, it has a monetary value attached to it.

How much is a US life worth?

This is going to be hard to work out. Isolation and economic standstills mean that there is a huge cost to the economy and society and to each person’s bank account. This is hugely variable, and in many cases impossible to work out.

I’m going to be pretty arbitrary here. The US government have agreed to pay $2.2tn dollars as a rescue package. This is money they would not have spent if CV had not manifested. There are many more financial costs (as well as non-monetary costs of the virus – mental health etc. [though these can have their own monetary costs]) that could also be added.

In a sense, I’m not interested here in what the actual value of a human life is, just that there is a value in principle.

What is interesting is that lives hold a comparatively high value when it is in the context of CV – and an even higher value if excess deaths and lower fatality rates are found – but have a lower or perhaps even higher value in other contexts.

I wonder, very cynically, whether governments in some sense hope for a greater death count in order to show value for money (or justifying big policy decisions)…

Or, looking at it from a different perspective, whether working out a really high number of lives saved from government policy and dividing this into government or society expenditure, we get a value per dollar spent. So the more lives saved, the lower the unit cost of the policy. In order for the government to have the most cost-effective policy, they need to spend low and save lives big. The more lives they save, ceteris paribus, the better value the policy is.

In order to know how successful and how much value we are getting from government policy, we need consistent (calculated globally, consistent across countries) and accurate statistics concerning deaths and lives saved, depending on how you want to work things out.

The lower the fatality rate, both in real terms, and more pertinently in potential lives saved, the less cost-effective our government policies are.

March 31, 2020 Churches Defy Advice & Rules (& Science) to Gather Congregations
Recent Comments
0 | Leave a Comment
Browse Our Archives
get the latest from
A Tippling Philosopher
Sign up for our newsletter
POPULAR AT PATHEOS Nonreligious
1