When This Pandemic Is Over, Let’s Get Back to the Habit of Made in Britain!*

When This Pandemic Is Over, Let’s Get Back to the Habit of Made in Britain!* April 8, 2020 Jonathan MS Pearce

*Or whatever localised version of this you may see.

These sorts of memes are popping up all over the place. To many of your friends or acquaintances on social media, these may seem intuitively sensible, and not racist and isolationist at all. But the people who created these memes almost certainly did have such tendencies. And those who share these, don’t be sucked in by rose-tinted isolationist views – they don’t add up, and all you do it feed the nationalistic (not the good kind) demon that lurks in the undercurrents of our society. 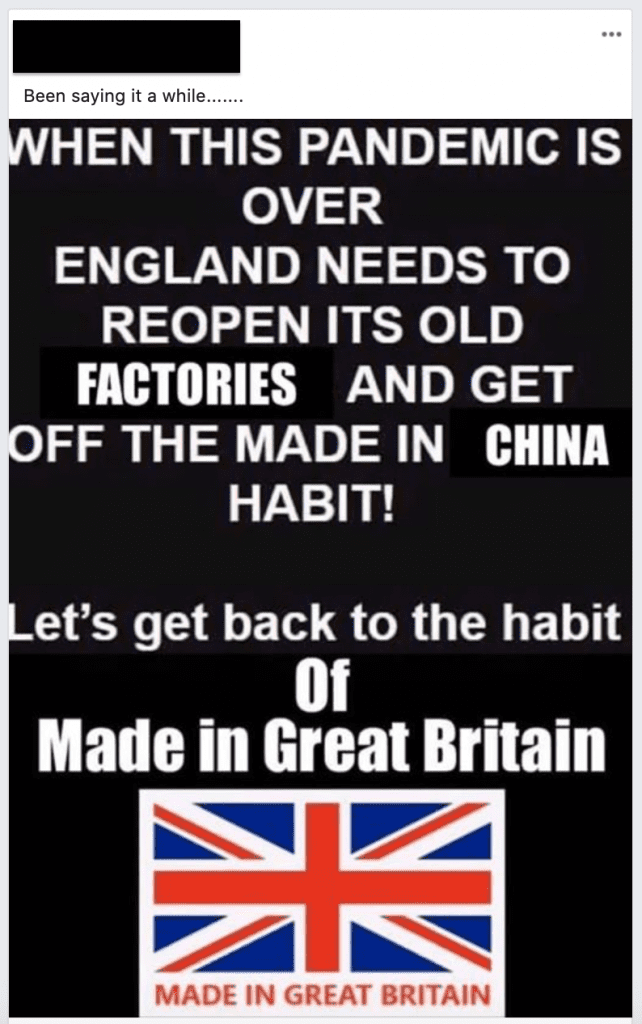 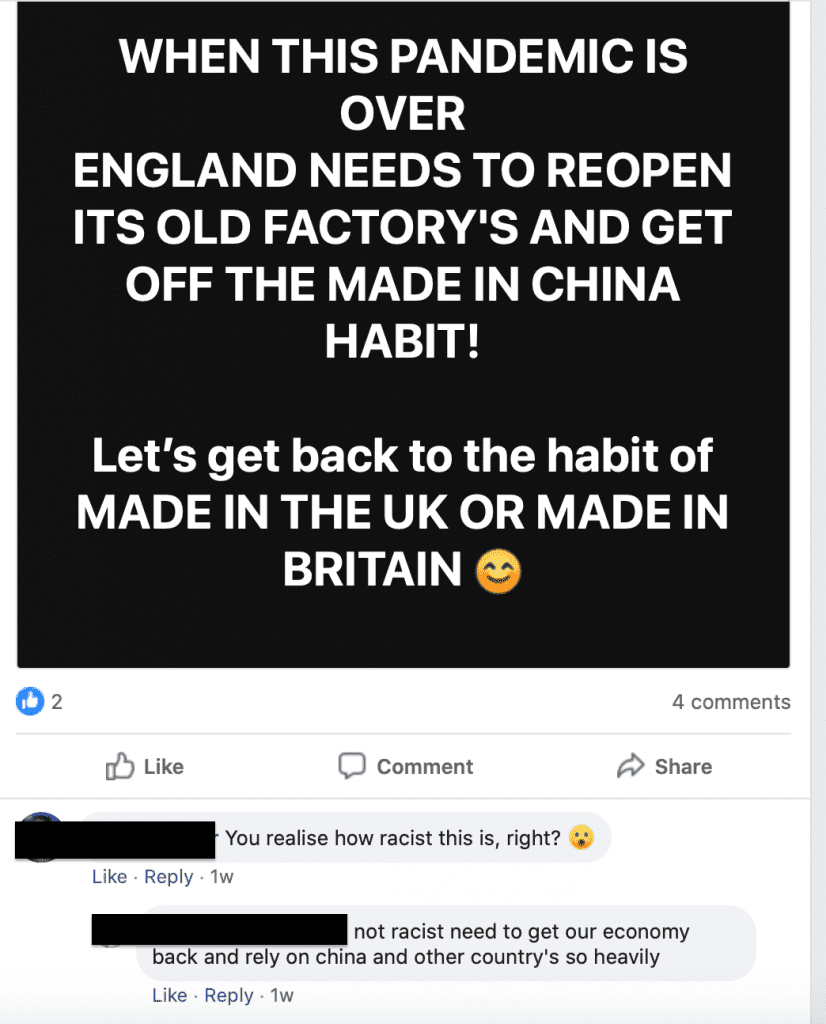 What’s really going on here – and we can tell this from the prominence of the Union flag and delightful white on black writing – is a simplistic appeal to little Englander nationalism. And this might sound attractive to many. “Yes, let’s make our stuff here rather than there because we will give our own people jobs and keep our money and supply chains here, at home.”

Except this is 2020 and we live in a global economic context, regulated by the WTO. Oh, and all the powerful trade blocs that exist, such as the EU of which we are no longer a member. Because of this, we are in an even more precarious international position, and going it alone isn’t pragmatically achievable (more on this below). But it sounds nice to people who are sucked in by Mel Gibson Braveheart-style promissory speeches. If you think Britain can be “great again” in spite of the rest of the world, then you have another thing coming. It doesn’t work like that. As mentioned later, it would be economic suicide.

But it does allow some flag-waving nationalistic pride. And that’s really all this is. Closing our economic doors to the outside world and shutting up shop would absolutely destroy us economically, just so we could proudly wave our flag. Whoop-de-doo. The thing is, for such people, flag-waving is that important. Remember the Conservative Party membership survey: They would rather see a Brexit even if it meant it broke up the union, that the Conservative Party itself was destroyed or that there was economic suffering. The only thing they wouldn’t accept was Corbyn being in charge.

In other words, there are many people who would bite off their nose to spite their face. They would choose such nationalistic isolationism even if it meant economic suicide. Because flag.

In Jason Stanley’s How Fascism Works (a great and quick book to read), he lists 10 pillars on which fascism is supported:

Now, there’s not an awful lot to these memes, but they would dip into perhaps four of these.

Unfortunately, it is often only a short London tube stop from nationalism to racism. Yes, of course you can have national pride without being racist. Heck, you should see me shout at the TV at a Six Nations match. But nationalism and racism are definitely very close bedfellows. The people who share these memes might not be racist, but they are certainly flirting with the idea, especially if they know that what the meme advocates is economic suicide and is essentially pragmatically impossible and would never happen. This is the biting off the nose part.

These memes are co-opting the current crisis to support a racist and nationalist agenda. It’s that simple. And by sharing it, you share responsibility in doing the same. If you want to make an economic point, do so in a more nuanced and proper way, if you can. Whilst I cannot categorically say that the person creating the meme is racist, I’d wager a fairly safe bet they would qualify as one. It certainly isn’t a meme spreading the liberal utopia of one world for all and opening the world up to global co-operation,

We have already seen Chinese and Chinese-looking people physically and verbally and culturally abused as a result of this. On one hand it has produced a melting pot of vindictiveness, and a simmering dish of virtue (signalling?) on the other, this virus.

Racists and nationalists of this bent will happily throw out impossible ideas (unreality) that sound intuitively appealing. I mean, this is how Brexit won the day, after all. We are only getting £350m a week to the NHS because of a global pandemic. Thank goodness for the pandemic… To be honest, the whole coronavirus affair will cover up a whole host of economic ills that were coming our way from Brexit, and might even seal the end of the EU, because…

This is something I was going to write a whole separate piece on: the idea that as we are threatened existentially and in terms of physiology and personal health, we march back down Maslow’s Hierarchy of Needs. 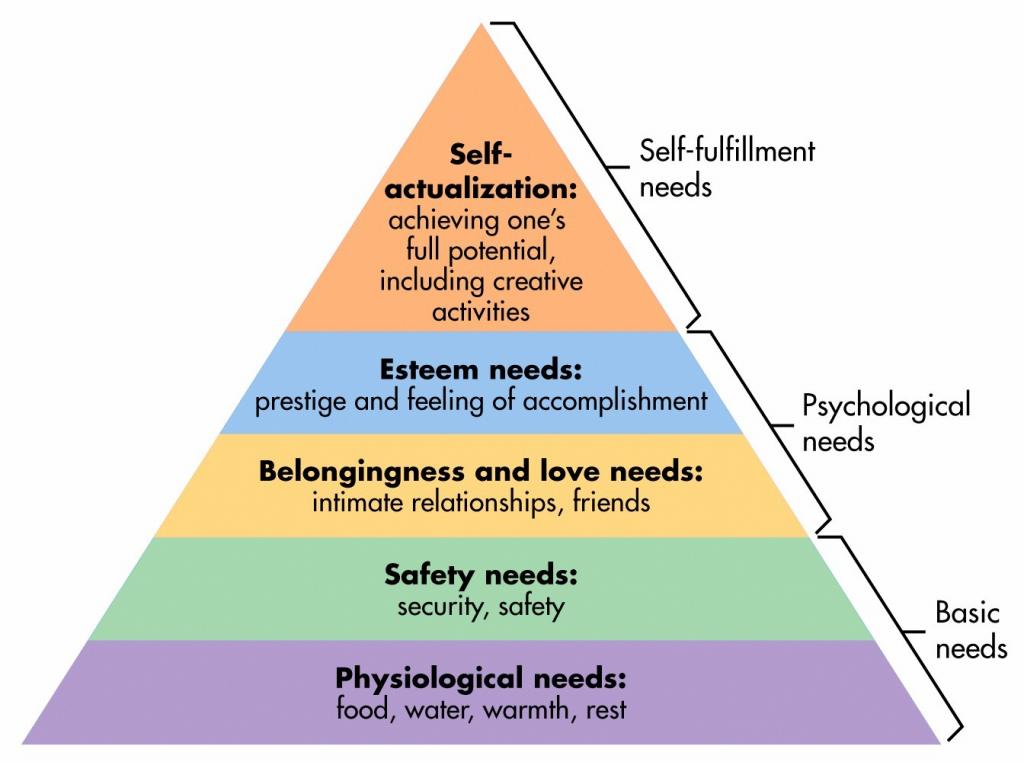 We have gone from many of us being at the top of the triangle to now being concerned with the bottom. This, for many people, means that they are no longer concerned with lovely things at the top – philosophy, organic food, fairtrade, and so on; they are concerned with keeping themselves and their family safe. This is where we march down the triangle towards individualism (there is an interesting aside here about those who are helping others in their local society with food groups and so on – I don’t have time to discuss that now). And in times of national threat, this individualism is most obviously manifested in nationalism and literal isolationism. Physical distancing means we are closing borders and front doors. There is a whole psychology being promoted here that can be found in the nationalist playbook, and this is the sort of thinking that is diametrically opposed to a supranational network of countries that is the EU. It will be a time of scapegoating: the US and many in the UK will blame China, whilst many in Europe will seek to blame the EU for not doing enough. These same people would previously be blaming the EU for doing too much! Damned if you do, damned if you don’t.

The EU might fall, and with it the ability of our closest allies to stand up to the economic might of China.

Speaking of economics, this is the main area of contention with these memes.

The economics of it is nonsensical

Let’s look at this claim. I’ll start with the last claim: “not racist to get our economy back and rely on china and other country’s [sic] so heavily”.

Well, it depends how far you take this. The first and most obvious thing to say is that, if you really want to do this to the extent implied, virtually everything the average British person would buy that was previously made in China would double in price. We do not have the manufacturing infrastructure or the cheap labour force to be able to do this. You would have a stark choice or either carrying on as we are or:

And so on. You could think up another bunch of arguments here that would amount to the same sort of economic suicide. The benefits of such an approach might be:

I may be painting a biased picture, but I don’t think that there is an economic argument for this course of action whatsoever. Why? Because if there was, we would already be doing it.

[EDIT – I am not talking about high-end, specific an highly technological or premium goods for which there is already a market and in which British goods already feature. This is mainly about lower-end and/or mass-produced goods.]

The thing about the supply of labour and manufacturing is that it moves around the world to the next cheapest place. So, arguably, when the middle class expands in China, and the money from their prolonged manufacturing there filters through, then it will not be cost-effective to produce there. The thing is, China has a massive population, meaning they can effectively move to different internal labour markets; moreover, the country produces most of its own raw materials and natural resources. Even if you could move to a country of cheaper labour, say, in Africa somewhere, the infrastructure and resources aren’t there. Interesting, though, that China are investing so so heavily in infrastructure in Africa, perhaps in prescience of this.

Really, what corporation would take a punt on this? Goodness me, even James Dyson, arch-Leaver, has taken his manufacturing to Singapore. Low tax, cheaper labour, hi-tech.

We already know the US trade war is costing them in the fight against Coronavirus.

America can’t even win a trade war with China (deficit has massively increased, massive bail-out to failing farmers, Chinese export prices haven’t gone down, which means that the tariffs are falling on U.S. consumers and companies, etc.). What makes this meme-creator think the UK can?

This is a really simplistic analysis because I don’t want this to be a huge economic essay; suffice to say that the economics of this just doesn’t add up. The plan is pie in the sky thinking that has no merit – what do you expect from a mere meme? Good luck if you think you could make it work, meme-manufacturer.

[EDIT – and this is not to say there aren’t sensible actions you can take to justifiably repatriate some manufacturing or services – these exists on a continuum. I am merely moving away from kneejerk soundbites that don’t stand up to scrutiny.]

April 9, 2020 Essential Services
Recent Comments
0 | Leave a Comment
"In case you didn't know, Gödel was also religious (he wrote but never published an ..."
Andrew G. Miracles as Parables
"People want to know what the future holds for them next day, next week, next ..."
Martin Zeichner Miracles as Parables
"I wasn't misquoting you - I was pointing out the dubious use of a word ..."
Anri The Dependence of Biblical Law Codes ..."
"Although Jesus taught in parables, his actions spoke louder than words.Ironically, progressive Keith Giles' "spiritual" ..."
Joe DeCaro Miracles as Parables
Browse Our Archives
get the latest from
A Tippling Philosopher
Sign up for our newsletter
POPULAR AT PATHEOS Nonreligious
1