Sympathy? Boris Johnson Is Either Stupid or Got Exactly What He Wanted

Sympathy? Boris Johnson Is Either Stupid or Got Exactly What He Wanted April 9, 2020 Jonathan MS Pearce

I am not having a go at Boris Johnson here due to ideological differences. Hear me out.

Johnson is still presently in intensive care (recovering) after catching coronavirus (CV). He caught this most probably from shaking countless coronavirus patients’ hands. He admitted doing this two weeks prior to his diagnosis – “I shook hands with everybody“. He likely gave CV to (or received from) his adviser Dominic Cummings and Health Secretary Matt Hancock.

At the time, he was delaying lockdown for the country to enable a policy of herd immunity. This was in the hope of flattening the curve. As I have previously written, flattening the curve isn’t really about people not getting the virus period, it is about them getting it at a point that is most convenient for the healthcare system so that it does not get overwhelmed.

His government was pursuing a strategy that rested, at least in part, on the idea of shielding the most vulnerable members of the British public from infection while allowing a large percentage of others to catch the virus. The hope was that most of these people would experience relatively mild symptoms, recover, and wind up immune, stopping the virus’s further transmission.

But this kind of herd immunity, experts said, could require upwards of 60% of the population becoming infected. Herd immunity as a deliberate policy, epidemiologists said, is usually achieved through a vaccination program. It was untested as a tool for responding to a pandemic. [source, my emphasis]

This was his intention – herd immunity of the type where people get the virus but don’t die, and come through the other side, whilst keeping the vulnerable away.

And at the same time, he was putting himself amongst those with the virus, shaking their hands for two weeks.

I see there being three options that explain Boris Johnson’s behaviour and resultant illness:

I can’t see any other options.

I think option 3) is most likely.

Given that I think option 3 is the most likely, I find it hard to feel any kind of sympathy for him other than an intuitive empathy for anyone who is struggling and in undoubted pain. He essentially doesn’t deserve sympathy, certainly in the way it is being poured on him.

If someone picked up a poisonous snake with the intention of getting bitten, it is hard to feel sorry for them when they get bitten.

Indeed, in Johnson’s case, if you agree with the policy of herd immunity, you could actually feel some kind of respect for his convictions and bravery.

Am I wrong here? 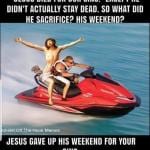