“Jesus Is My Vaccine” and Your Judgement, Apparently

“Jesus Is My Vaccine” and Your Judgement, Apparently April 23, 2020 Jonathan MS Pearce

I know that Occupy Democrats isn’t the most reliable of sources, but here the protestors are hoist by their own petard:

“This whole thing is a hoax”. Let’s start blaming Bill Gates, because that’s not just conspiracy theory whackjob talk. The problem is, these people, Flu Klux Klan, are a very vocal minority having their flames fanned by OANN, FOXNews and Breitbart. Irony alert – someone claiming it is a scamdemic but wearing a facemask anyway.

There may be a reasonable justification for not being in lockdown, but these people are not communicating it. Going for lockdown and not-lockdown simultaneously is the worst of both worlds, arguably (although, there is an argument for what I call a “leaky lockdown” – more on that in another post).

So, “Jesus is my vaccine”, as the truck says.

The ironymeter keeps ticking over as “Man Who Called Ohio’s Lockdown Order ‘Bullshit’ Has Succumbed To COVID-19“. One of these protestors, or someone with the same views, has sadly died from the virus, and he won’t have been the only one. I guess Jesus is their vaccine until Jesus isn’t. It looks just like real life, to be fair. Every death, and let’s go along with the Westboro Baptist church here (who are arguably more logically consistent than their liberal Christian counterparts – 37:10), is a judgement on humanity and/or the person in question. In some sense, this guy got what was coming, or was innocently collateral damage for a greater good.

As the Marion Star reported, this was Marion County’s first death. And given he said this, it could be seen as just desserts by some: 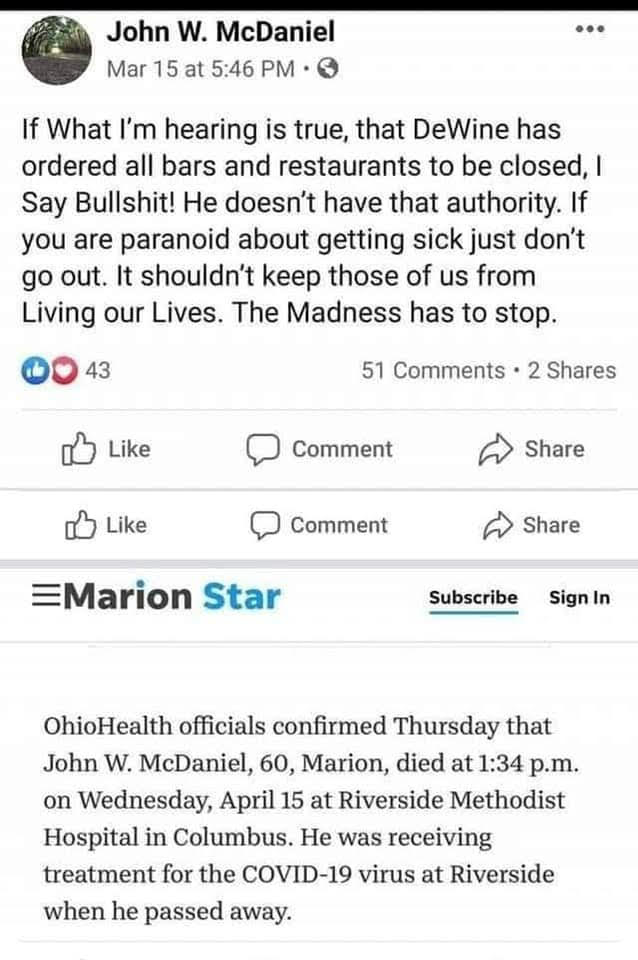 Two days previously, he had said: “Does Anybody Have The Guts to Say This Covid-19 is a Political Ploy? Asking For A Friend. Prove Me Wrong.”

He was proved wrong. Arguably, by God. Every death is like this in the context of an OmniGod, every death is justified because there is no gratuitous suffering. They are all necessary in some way.

We don’t seem to have this protestor problem in the UK, but then again:

Now, our stats are bad – though it must be remembered that we are some three weeks ahead of the US. And, hugely significantly, the Financial Times with Office of National Statistics data, released a robust analysis yesterday that the UK has conservatively had at least 41,100 deaths, over double the officially reported figure. But this can be said about the US, too, where we are now finding out that the first deaths happened weeks before originally thought.

Part of the problem is that death stats are not comparable: the UK government ignores deaths in care homes and the community,m only counting hospital deaths in their official stats, France and other countries do not do this. Why would we do this? We could certainly get the figures, so the only reason would be political. When we check those total stats and per million stats on worldometers, they skew against other countries and make the UK look comparatively better. The U/s has equally problematic issues with counting deaths, as this article points out.

But back to truth in general, FOXNews is certainly propagandizing this outbreak, though they have walked back on some earlier claims (and have got rid of one anchor) for fear of being sued, which they are for calling it a “hoax”.

Kara Swisher’s Op Ed can be found here. And the day I fully agree with Piers Morgan is, indeed, a strange day:

In an era of truth being under the spotlight for so many, but thrown to the wind for so many others, in a time where the POTUS can openly lie (and even have his experts, such as Dr Birx, spread lies on their behalf) in public, we have a deadly situation.

But, Christian, God will judge you.