Taking Advice from the USSR

My favorite columnist in the LA Times is a guy named Steve Lopez. He has worked for the Times for almost twenty years. Before that he wrote for several magazines, including Time, Life and Sports Illustrated. He has been nominated for a Pulitzer Prize several times and has won other awards. He’s an old guy like me and he’s been observing and writing for a long time on many subjects. He is often provocative, but always thoughtful and entertaining.

His column today was no exception. It is titled “This pandemic has exposed our deep fault lines,” He was watching the drivel on Fox, and it hit him that our country is really hopelessly divided. Hopelessly. We should stop talking about “coming together,” he says. It ain’t gonna happen. If Trump loses the election this fall, do you think there will be a great sigh of relief, and everybody will shake hands and hug? Trump isn’t helping. He has suggested that if he loses there might be an armed rebellion by his supporters. Imagine that! A US President actually inviting, if not inciting, violence if he loses.

The Trump re-election campaign has used dog whistle coded language familiar to his cult followers, accusing Democrats of using the coronavirus crisis to “STEAL THE ELECTION right before our eyes” in an email blast with the subject line that reads “Cheaters.”

Washington Post columnist Brian Klass, a University College London assistant professor of global politics and author of “How to Rig an Election & The Despot’s Apprentice,” warns that Trump is laying the groundwork to get “his supporters to reject results” of the November election “and use violence.” Obviously, this is being done with Trump’s approval. It sounds like a warning, if not a threat, to his opponents…be careful what you wish for!

Lopez says the only way out of this may be division of the nation into two parts: The American Republic, and the Kingdom of Mar-a-Logo. He cites the historical example of the breakup of the Soviet Union back in the nineties into fifteen pieces. Trump has expressed such deep-seated contempt for the blue states, that he would probably be happy with this. A lot of southern states, particularly Texas, have expressed an interest in severing connections with Washington. Maybe it’s time to let them leave.

Ever since the Civil War, most of the ex-slavery states have been an economic burden on the northern half of the country. (See Note) They never figured out how to pull their economic weight without the free labor of slaves. Lincoln was right to abolish slavery, but maybe he was wrong to preserve the union. He should have let the process of natural selection work, and consign the slavers to the economic oblivion they so richly deserve.

I am not sure Steve was actually serious about breaking up the nation. He admits that he may be suffering from “cabin fever” due to the current sequestering edict. But I found his fantasizing entertaining and provocative. I hope you agree.

Most northern states pay more in taxes to the Federal government than they receive in payments from government programs. The opposite is true of southern states. 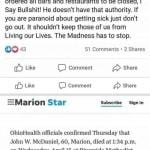 April 23, 2020 "Jesus Is My Vaccine" and Your Judgement, Apparently
Recent Comments
0 | Leave a Comment
Browse Our Archives
get the latest from
A Tippling Philosopher
Sign up for our newsletter
POPULAR AT PATHEOS Nonreligious
1

Bespoke Spirituality: Another Try at 'Last Ideology Standing'
This past week, we had a really good time examining Brett McCracken's...
view all Nonreligious blogs
What Are Your Thoughts?leave a comment
Copyright 2008-2021, Patheos. All rights reserved.
error: Content is protected !!