What Is Naturalism?, and Other Criticisms

What Is Naturalism?, and Other Criticisms May 4, 2020 Jonathan MS Pearce

The Cosmos is all that is or ever was or ever will be.

Jayman, a Thomist who takes his time to argue his case here (and for which I am grateful, because he is a lot more thoughtful and constructive than others) has recently written a short critique of my post discussing naturalism (Concerning Metaphysical and Methodological Naturalism). His piece can be found here.

His main points are as follows:

I would need him to expand on 4. since he provides no detail there, so let me look at the other three. In this post, I will concern myself with 1. only.

The first problem is the division of the world into “natural” and “supernatural” things. The criteria by which it is decided whether a thing goes into the natural category or the supernatural category is rarely spelled out. It is also implied that a thing is either natural or supernatural, but not both natural and supernatural.

The self-described naturalist needs to define naturalism before we can discuss its merits. Pearce may label me a “supernaturalist” but I am under no obligation to defend this nebulous position.

This point has some merit; naturalism is often a term used intuitively, like we somehow just sort of know what it means without being able to robustly define it. And, indeed, the term has no exact definition as used in philosophy. It is an area that is open for debate. You can see this from the nebulous, if nice-sounding Sagan quote. The SEP recognises this:

The term “naturalism” has no very precise meaning in contemporary philosophy. Its current usage derives from debates in America in the first half of the last century. The self-proclaimed “naturalists” from that period included John Dewey, Ernest Nagel, Sidney Hook and Roy Wood Sellars. These philosophers aimed to ally philosophy more closely with science. They urged that reality is exhausted by nature, containing nothing “supernatural”, and that the scientific method should be used to investigate all areas of reality, including the “human spirit” (Krikorian 1944, Kim 2003).

So understood, “naturalism” is not a particularly informative term as applied to contemporary philosophers. The great majority of contemporary philosophers would happily accept naturalism as just characterized—that is, they would both reject “supernatural” entities, and allow that science is a possible route (if not necessarily the only one) to important truths about the “human spirit”.

Most philosophers will describe themselves as naturalists, but leave the term open enough to act as a large and fuzzy umbrella. I have already talked here a number of times about the difference between methodological and metaphysical (ontological) naturalism, so I will assume a knowledge of both terms.

A central thought in ontological naturalism is that all spatiotemporal entities must be identical to or metaphysically constituted by physical[3] entities. Many ontological naturalists thus adopt a physicalist attitude to mental, biological, social and other such “special” subject matters. They hold that there is nothing more to the mental, biological and social realms than arrangements of physical entities.

The driving motivation for this kind of ontological naturalism is the need to explain how special entities can have physical effects. Thus many contemporary thinkers adopt a physicalist view of the mental realm because they think that otherwise we will be unable to explain how mental events can causally influence our bodies and other physical items. Similar considerations motivate ontologically naturalist views of the biological realm, the social realm, and so on.

What is important here is that the mental world needs to be within the remit of naturalism (I will use this term to basically talk about metaphysical naturalism from henceforth). But the general situation here is that naturalists will either adopt some kind of monism, where mental is physical in some manner, or supervenience, where the mental depends necessarily on the physical. This can be in terms of property dualism, where a single physical substance may have mental and physical properties. This is opposed to substance dualism that suggests that there are two fundamental substances (i.e., matter and mind) that inhere two different sets of properties.

There is obviously a connection between the methodological and metaphysical varieties since one might claim that naturalism is all that can be found by the methodology of science, or methodologically finding out about nature. If you can’t test it, it’s not natural, so to speak. We might say that something that is natural is bound by the Laws of Nature (see my post Philosophy 101 (philpapers induced) #11 – Laws of nature: Humean or non-Humean?).

This is where methodological naturalism comes in because we might discover a new, unexplained physical phenomenon. Rather than think it might be supernatural, we assume it is natural and part of the natural fabric around us, and we do so based on inductive reasoning.

Steven Schafersman (in “Naturalism is Today An Essential Part of Science”, a paper presented at the Conference on Naturalism, Theism and the Scientific Enterprise) synthesizes many definitions, which he lists, to create his own (his paper is no longer on the internet, but I have a copy):

In my own definition, a synthesis of those above, naturalism is the philosophy that maintains that (1) nature is all there is and whatever exists or happens is natural; (2) nature (the universe or cosmos) consists only of natural elements, that is, of spatiotemporal material elements–matter and energy–and non-material elements–mind, ideas, values, logical relationships, etc.–that are either associated with the human brain or exist independently of the brain and are therefore somehow immanent in the structure of the universe; (3) nature works by natural processes that follow natural laws, and all can, in principle, be explained and understood by science and philosophy; and (4) the supernatural does not exist, i.e., only nature is real, therefore, supernature is non-real. Naturalism is therefore a metaphysical position opposed mainly by supernaturalism. It is not an ethical system, although a variety–pragmatic naturalism, a synthesis of pragmatism and naturalism–does develop ethical positions. Furthermore, naturalism is a subset of metaphysical realism….

Naturalism is pretty much a case of Ockham’s Razor, in one sense, being that which is required to understand our physical environment, no more. We have no need of the supernatural hypothesis. There will be a lot of close connection to epistemology here, namely the coherence and pragmatist theories of truth (since there is no way of knowing indubitably whether the correspondence theory holds). Phil Rimmer, here, produced a pretty good working definition:

A good definition of natural is to say it is that which is bound by law, hence a Law of Nature.

All observed natural phenomena are seen to be lawful and lawfully consistent even if the laws are not known. Even radioactivity is statistically lawful.

The supernatural would be that which is not seemingly lawful and is often associated with imputations of unseen agency. Any phenomenon claimed to be innate magic possessed by objects, if seen to be lawful, would need to be re-categorised as natural. Thus sunstones and south-seeking stones.

A spurious claim of supernatural for that which is natural is a technique used by hucksters, often supported by the duped, who in their occasional slow counter realisations often double down for shame or for a little duping of their own.

Metaphysical objects are mental might-bes. These are just thinking tools that, like all mental objects exist in the natural space that includes brains.

Of course, one could defer back again to the example of a newfound phenomenon (any new scientific finding) – how would this fit here? Well, if the phenomenon was predictable, reproducible, observable in some way, then it would fall into the purview of naturalism. This is why, in my essay “The Argument from Format“, I argue that the universe and its laws qua naturalism must be deterministic. I can’t make sense of any other form of reality that gives rise to such complexity as we see around us if it does not work to lawlike behaviour.

Personally, I don’t rule out supernatural activity a priori. Everything outside of cogito ergo sum is an exercise in probability, and more accurately in probability inferred from observations of the world around us, inductively. The probability of the supernatural existing is, therefore, vanishingly small. Our whole worlds are combinations of sensory data collections and conclusions, and so probability is the soup du jour.

You might go down the rabbit hole of wondering whether rather a-causal mental or abstract domains are part of a naturalistic worldview, such as mathematics. I would argue maths is a conceptual language humans have developed to understand and navigate the physical world around us, and falls into the mental -> physical supervenience. 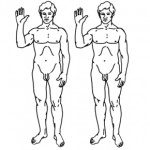 May 4, 2020 Pro-Life Debate: Answering Criticisms on the Human/Human Being Distinction
Recent Comments
0 | Leave a Comment
"AlinskyTrick #4. They're your tricks, Boreal, not mine. I'm surprised you don't recognize them."
Anjasha Freed Holidays!
"Will: Why do you keep lying about OCONUS voting?"
George T Corruption & Lies: Trump & the ..."
"Why do the UK and Belgium have more COVID deaths per million of pop than ..."
See Noevo Word of the Day
"Will: It's childish of you to lie about OCONUS military, government, and citizens. They all ..."
George T Corruption & Lies: Trump & the ..."
Browse Our Archives
get the latest from
A Tippling Philosopher
Sign up for our newsletter
POPULAR AT PATHEOS Nonreligious
1

Melodifestivalen Medley - Sign Language by Tommy Krångh
There is much to love about this, but you should at least...
view all Nonreligious blogs
What Are Your Thoughts?leave a comment
Copyright 2008-2020, Patheos. All rights reserved.