Trump and His Own Deep State Madness

Trump and His Own Deep State Madness May 11, 2020 Jonathan MS Pearce

I haven’t talked about Trump for some time simply because there is not much else he can do to surprise me. He is compulsive viewing and I am continually engrossed with his sheer ineptitude, failing cognitive abilities (just listen to him speak for chrissakes) and unerring march to what would, in any normal era, have been assured self-destruction. It does look like, given the consistency of the polls and the sheer idiocy of the man’s actions, that certain pro-Trump cultists might have to row back their remarks in the face of his increasing chance of being beaten by Biden when and if the November elections go ahead.

The man is an insult to his electorate. I mean, they should be utterly pissed off, across the partisan lines, utterly enraged that he would rather spend his time writing literally hundreds of tweets and retweets attacking, in a truly juvenile fashion, reporters and detractors, whilst irresponsibly spreading conspiracy theories. He has even accused one journalist critic of murdering an employee:

The guy is unhinged. Just see his track record on the virus:

He should be hung by his own words, i.e, “And the fifteen within a couple of days will be down to close to zero. That’s a pretty good job we’ve done.” Add this to: “No, I don’t think it’s inevitable.” And then look at 80,000 deaths and increasing. He’s a potato sack full of lies that has spilt and has now engulfed the farm.

Anyone who supports him is equally unhinged unless they openly admit they are doing so for truly consequentialist reasons and lay them out.

Behind the scenes, Republicans are very nervous about his behaviour but don’t have the Goldwater-esque backbone to come out and do something about it.

He just recently when “lava-level mad” at his team for allowing his valet to slip through a rigorous testing regime adopted for him, whilst at the same time declaring to his electorate that testing is not that important. “This is why the whole concept of tests aren’t necessarily great,” Trump said, amongst many other things. Well, if it ain’t all that, don’t get so worked up about it. For him, testing makes the US “look bad”.

He claims he has pretty much single-handedly saved millions of Americans’ lives with his policies, but the devil is in the details and his claims are, unsurprisingly, bunkum.

His definition of “warriors” appear to be people who go to work and people who go shopping… That said, this is the first time I have seen him admit other people than himself (but mainly him) have worked to make the “greatest economy in the history of the world”:

We have a situation whereby Trump has created his own deep state with a distinct lack of transparency: AG Bill Barr is blocking access to Trump’s tax returns and is generally being his henchman, Guiliani is being a freelance foreign diplomat, and Michael Flynn will be pardoned and will no doubt rejoin the administration thereby making a mockery of the American legal system; Trump and his administration are taking control of the justice department and the intelligence community – the FBI and CIA.  (See also “I’ve Seen Trump’s Tax Returns and You Should, Too“.)

And, news just in, AGAIN about 2000 former DOJ officials call on AG Barr to resign.

Of course, these kinds of rants aren’t going to convince anyone out of their position. Bitecofer, political analyst, agrees that the polarised state of UDS politics does not lend to changing people’s minds. You’ve got to mobilise the otherwise non-voters. Really, I’m not sure what it would take for Trump to lose that core vote short of admitting Melania and himself had had three abortions since becoming president and that he was going to tax churches and control guns.

And in any normal era, Biden would be raked over the hot coals for his alleged sexual harassment. But these aren’t normal times, and Republicans know they can’t use this otherwise incendiary grenade on the Democrats’ campaign due to the fact that Trump has a whole host of such allegations hanging around his neck like weighty chains. Trump is Captain America to Biden’s defence, swatting away PR missiles with his Teflon shield of harassment allegation repulsion. “That’s not a knife; this is a knife…”

As the Atlantic opines:

Zelizer, of Princeton, thinks future historians will be astonished that Trump’s failure was tolerated to the point that his resignation wasn’t even part of the conversation. “I think we will look back and ask why people weren’t more furious,” he says. “Where was the outrage?”

But, his cultists will still turn up on the thread below, equipped with their phenomenal dollops of cognitive dissonance, to espouse their love for their dictator-in-chief.

May 11, 2020
Bitecofer on Republicans' & Democrats' Election Strategies & Predictions
Next Post 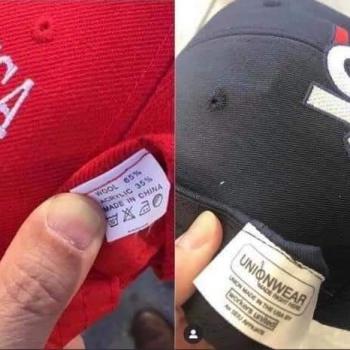