Okay, so this will be the last exclusively political one for a few posts. I’ll get back to religion! This is a fantastic interview that Al Franken (shame he had to step back from politics – so much potential) gave to Steve Schmidt. Schmidt is an interesting person, having been a lifelong Republican whose lifelong Republicanism ended in 2018 after he left the party, and now he looks to vote Democrat after publicly railing against Trump and Trumpism.

He worked on the McCain campaign and was responsible for bringing Sarah Palin to the fore. Before rather regretting it. This is a really worthwhile interview that should be listened to in its entirety:

When Schmidt was talking about the greatness of Lincoln and FDR, their shared characteristics that made them great, you can really understand what a bumbling cockwomble Trump is as:

“Donald Trump possesses every frailty of the human condition; he possesses none of the heroic virtues and all of man’s pathologies, and he is almost an anti-leader in a moment of great crisis and testing…”

Where Lincoln and FDR have characteristics that are so far removed from Trump (William Tecumseh Sherman said of Lincoln that he had never met any man who had possessed all the qualities of greatness and goodness as Lincoln). As Schmidt says of the two, they both had:

“reserves of empathy and decency, they were considerate to people, they were kind, they were big, they had suffered immensely in their own lives and I think had an understanding of the human condition.”

The fact that Trump has several times compared himself to Lincoln is an insult to the man and to history.

“The constant whining and grievance. Grievance and injury is the high-octane fuel of Trumpism. He is America’s greatest vistim. I grew up in a time in the country…I’m 49 years old, I came of age in a Republican party that had a real anethema to victim culture. It was kinda the seense was, ‘Culturally, get your shit together. You’re responsible for you. It’s not my fault, it’s not my problem; do the things that you’re supposed to do to be successful.’ You look at someonme like Donald Trump and he’s just the antithesis of that. He is incapable of personal responsibility. Everything is an injury. He has no capacity to rise above even the smallest insult. He is a textbook bully, a narcissist. He is dishonest at a level that is hard to articulate and just really somebody who is unfit at a mental level, at an intellectual level, at a moral level when it comes to the exercising of his duties and that is a real tragedy to the country and it’ll take a long time to revoer from that.”

Oof. That should hurt. Though nothing hurts Teflon Trump, as his Mirror of Narcissus bounces all negativity off before it can lodge itself meaningfully in his psyche and affect his future behaviour. 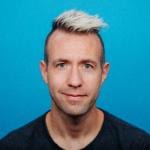 May 23, 2020
Christian Rocker Steingard Loses His Faith; What of His Friends?
Next Post

May 24, 2020 White Evangelical Support Through the Pandemic, and Going Forward
Recent Comments
0 | Leave a Comment
"QAnon gets former CBS president to lie about media being Lefties!https://cnsnews.com/blog/mi..."
See Noevo QAnon Facts
"Trump thinks it's fine to kill older people if it gets the job numbers up.Right. ..."
See Noevo QAnon Facts
"I cannot, for the life of me, understand why you think it frustrating for me ..."
John Crawford The Enlightenment and Conflicting Rights
"I don’t like resorting to insults and I won’t, but I find your constant assertion ..."
Geoff Benson The Enlightenment and Conflicting Rights
Browse Our Archives
Follow Us!