On Racism and Changing Minds: Lurkers and Sowing Seeds

It’s at times like these, as an atheist, that I like to listen to the words of Jesus…

“Listen! Behold, a sower went out to sow. And as he sowed, some seed fell along the path, and the birds came and devoured it. Other seed fell on rocky ground, where it did not have much soil, and immediately it sprang up, since it had no depth of soil. And when the sun rose, it was scorched, and since it had no root, it withered away. Other seed fell among thorns, and the thorns grew up and choked it, and it yielded no grain. And other seeds fell into good soil and produced grain, growing up and increasing and yielding thirtyfold and sixtyfold and a hundredfold.” And he said, “He who has ears to hear, let him hear.”

I recently posted on my experience with social media “friends” and racism. I promised a follow-up post that took into account comments made by friends. I also want to talk about lurkers.

One of the reasons I don’t unfriend, ban or block people is that these conversations, however uncomfortable they are, provide good ammunition and interest to lurkers. They aren’t just for my own gratification, they are for those many people out there who are quiet for 95% or 100% of the time, who don’t want to get embroiled in internet debates for whatever reason, but who read anyway. I know there are lurkers here. Sometimes, the odd commenter raises their head in a way that shows, even though it seems a one-off, that they have been in for the long-haul.

Concerning the announcement I made the other day, and the unfriending I did over aa debate about racism, I got a friend request and this morning this same chap said:

…it was the above described thread that urged me to send you a friend request. I felt I could learn more from you, facts and data trump opinion and rhetoric, it’s that simple.

Music to my ears. That debate wasn’t just a frustrating waste of my time.

Another friend piped up, someone with whom I used to play ultimate some twenty years ago and who recently found me on Facebook, someone who is something of a lurker, though when he comments, he is always on point:

I love your approach to reason and debate. Your thirst for greater knowledge to inform your view of the world, and your desire to extend your reach beyond those that share your view.

Unfortunately there are some who have no desire to be so open minded. Their view is so conditioned by fear that the thought of expanding their consciousness is abhorrent.

There are some you can’t reach. Feel compassion and sympathy for how scared they must be of everything outside of their status quo.

Beyond the wilfully ignorant, we are all trying to reach those who are open of mind, but sadly are fed on a diet of junk information. Societies are changed for the better when we are able to bring those people into the circle of debate.

They are the fertile soil on which you can sow your seeds of change.

For the US as an example, I do not care to reach those Trump supporters who cannot be reached, our energies must be given to those that will swing the vote in 2020.

Be hopeful, but never complacent. We all learnt that lesson in UK over Brexit.

Keep up the good work.

Although I would take issue with the claim that swing voters are the best target, what he says is spot on. It turns out that swing voters are an ever-decreasing subgroup that don’t have as much return on investment as, say, getting people out to vote who otherwise would not have. As they say of the Democrats in every election, it is their election to lose. They have a more populous electorate, but not enough of them appear motivated enough to vote regularly.

But, over time and demographically speaking, we are seeing a shift in US politics as red states are moving to blue through purple. The winds of change are blowing seeds on their zephyrs.

The final anecdote is another person (DH) I used to play ultimate with, on the same team, and our paths met on Facebook recently in the same way as the previous commenter. His comment (I love his line about the R rate) was in reference to the Dwayne Johnson video that he shared from me, after I said “It was as good speech”:

It is, JP; I know you understand this anyway but a little bit below is about how maybe my views have shifted a little in the last couple of weeks

I’ve never liked racism of any form but being brought up in middle-class England, I have always been a bit removed from the issue and I have also believed social mobility was possible and that things were different in this day and age… What I didn’t realise, and I’m talking the US here, is how much the legacy of history is still pinning a society/race down in general.

The white man immigrated, conquered and took over America, they owned the 100% job-lot of everything; they imported many slaves from Africa to do the hard labour.

150 years ago, slavery was abolished in the US, that’s 60yrs after the UK, and that still seems a long time, maybe time enough for change? But at that point the white man still owned 100% of everything, all that really changed was that rather than being slaves, housed in a field/shed, was that the “workers” then had a wage of food or could leave if they wanted to. But leave to go where? With what money, what land, what means? And, of course, there was segregation… How could anyone who was in segregation get a good job, a nice house and a nice white person, middle-class lifestyle? Well, of course, they couldn’t, could they? They were still oppressed.

Segregation ended 75 yrs ago, about the time our fathers were born and a black man could finally get on the same bus as a white man. Well whoopy do! If our father’s father was black, that doesn’t mean he would be given a decent job; what education would he have had? What skills/trades would he be given a chance in? He wouldn’t be given a mortgage to buy a home to be able to start laying roots or building assets to pass down as no bank would lend to him.

So a black person of our father’s age would have had a stronger chance of being born into poverty/the breadline, poor schooling, housed in some low poverty area, with peers in exactly the same situation. What role models did they have? What examples of family members and peers did they have that had been educated and got a good job? Few or none, just a massive history and weight of being shat on.

50yrs ago, Martin Luther had a dream (so still, clearly, the white man still owned everything and controlled everything).

And our generation is born to fathers without education, good jobs or their own homes.

And all this time, the people in this situation are looking on with envy and quite rightly hatred and resentment of the white man and the lifestyle that they are not afforded.

This could be us, born into nothing, poor education, no role models, nothing.

What choices would we have made, with little or very few role models and a history of being put down? Our peers would be saying “that way won’t work”, “you won’t make it, they won’t let you”  and “the only way you’ll make it is on the street, you’ve got to be street smart bruv”.

No healthcare, a less liberal society than the UK, throw the 2nd amendment into the mix and, oh f’ck, there you go!!!

This is why there’s a law and order problem in the US today.

We created the problem!!

That’s us, the white man.

Yes, there’s minor social mobility today, some individuals can get out and climb the ladder, but not a society/class as a whole, the masses are stuck and this won’t change by itself.

The black man cannot fix the problem or the situation they find themselves in the US today; how can they?

I now get that systematic racism is a real thing, even when the people who run the system in this day age (and in countries other than the US right now) might not be racist themselves

The Rock is right, where is the leader of the US right now? Nowhere other than being a big part of the problem.

The Rock is right, we all need to be leaders. This is partly why I typed this message, if just one person reads it might increase understanding. Get the R rate of understanding above 1 and it might just help.

This probably won’t make you as emotional as it makes me; to know this guy and to see him write something like this. He is no philosopher, no critical political analyst. He is a regular guy. But he also stands above regular guys. He’s more than that. He’s a lurker who has been self-critical, who has questioned his own existence in a way that so, so many people do not. He has shown empathy. He has shown decency.

It’s a long way from sitting on a grotty sofa in the 90s at 2am, after returning from the pub, pissed and playing Diablo, talking inconsequential crap.

Some of us grow. Some of us are lucky to have fertile soil.

It is not just about sowing seeds, it’s about providing the fertile soil in which the seed can grow. We can’t expect the single seed to change the ground in such a short time. For that, there must be a coexistential groundswell. As seeds become seedlings, become plants, become fertilising compost, we must plough, nurture, fertilize and then the harvest will be bountiful, fulfilling and healthy. For the whole world to change, we all need to change; we are the change we need.

And I thank DH for showing me that this is possible and that we all play our part.

Kia kaha, bro. Hats off to you.

June 8, 2020 The Myth of Heather MacDonald's "The Myth of Systematic Police Racism"
Recent Comments
0 | Leave a Comment
Browse Our Archives
get the latest from
A Tippling Philosopher
Sign up for our newsletter
POPULAR AT PATHEOS Nonreligious
1 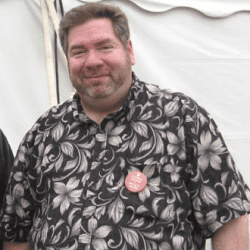