Well, it should humiliate him, but will no doubt be water off a duck’s back.

As we all know, Trump is the most presidential of presidents. He doesn’t react like a toddler, or a megalomaniacal narcissist. What’s that? Oh, sorry, that’s exactly what he does.

When he was upset with poll numbers recently, he decided to shoot the messenger rather than take a look at his image and the way he was portraying himself. Trump thinks he can do no wrong and be no wrong. At that point, he threatened to sue his own campaign manager, Brad Parscale.

Yesterday, CNN commissioned their own poll:

The CNN poll conducted by SSRS and released on Monday shows Trump trailing the former vice president by 14 points, 55%-41%, among registered voters. It also finds the President’s approval rating at 38% — his worst mark since January 2019, and roughly on par with approval ratings for one-term Presidents Jimmy Carter and George H.W. Bush at this point in their reelection years — and his disapproval rating at 57%.

Trump had a meltdown, throwing his toys out of the pram. He wrote a cease-and-desist letter to CNN’s CEO demanding an apology, trying to publicly shoot the messenger.

In the letter to Zucker, the Trump campaign argued that the CNN poll is “designed to mislead American voters through a biased questionnaire and skewed sampling.”

“It’s a stunt and a phony poll to cause voter suppression, stifle momentum and enthusiasm for the President, and present a false view generally of the actual support across America for the President,” read the letter, signed by the Trump campaign’s senior legal adviser Jenna Ellis and chief operating officer Michael Glassner.

The campaign formally requested that CNN retract the poll and publish a “full, fair, and conspicuous retraction, apology, and clarification to correct its misleading conclusions.”

Today, Zucker replied to the POTUS, and it just shows how pathetic the President has become. Here it is: 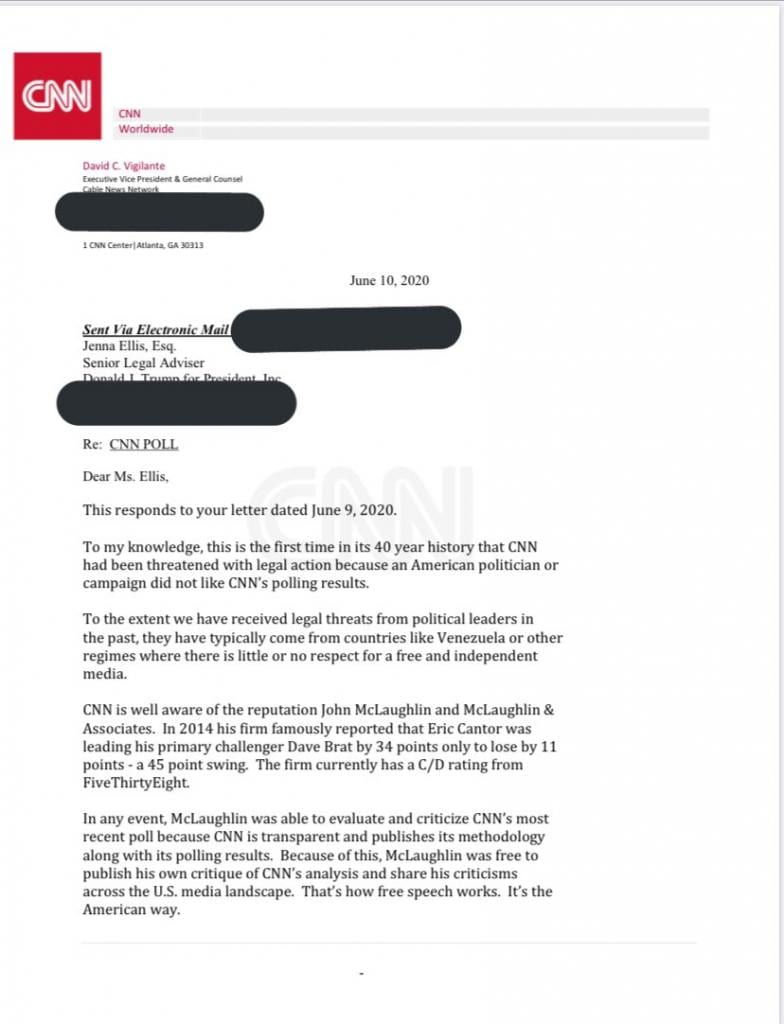 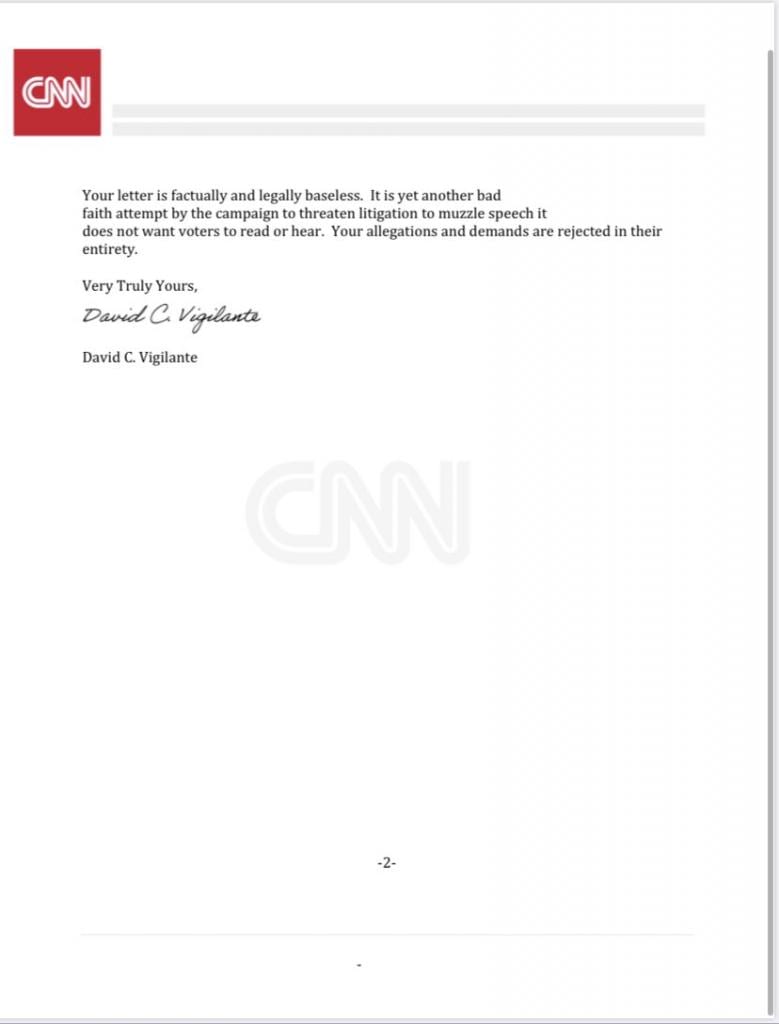 I love the style of this put-down – succinct and poignant.

CNN has also fact-checked Trump’s claims in his original letter:

“It’s a poll of 1,259 adults — not even registered voters, let alone likely voters,” the letter says, citing a McLaughlin memo from earlier this week.

While it’s accurate that 1,259 adults were reached on landlines or cell phones by a live interviewer for the survey, the 14-point margin by which Trump is trailing Biden came from a question posed only to 1,125 registered voters. It’s typical for polling to sample registered voters rather than likely ones at this stage of the race, as it’s difficult to project whether voters will participate in an election that is five months away. CNN, as do most public pollsters, typically reports results from likely voters around Labor Day.

It should be noted that in CNN’s poll, Biden expands his lead among those who are most (i.e. extremely) enthusiastic to vote.

McLaughlin says CNN’s survey is a “skewed anti-Trump poll of only 25% Republican.” That percentage of respondents, however, is consistent with several other major polls that use live telephone interviews, which provide the most reliable snapshot of the race. McLaughlin this week argued that pollsters should include a third of Republicans in surveys to reflect the 33% that they represented in the 2016 vote, but exit polls nearly always have higher shares of partisans and lower shares of independents than pre-election phone polls.

The letter to Zucker also includes McLaughlin’s criticism that the poll, conducted between June 2 and 5, was taken “before the great economic news,” an improvement in the jobless rate that was released on Friday, even though the poll was still being conducted throughout that day.

And the survey comes amid an especially turbulent time in Trump’s presidency, including the ongoing coronavirus pandemic, outrage and concern over race relations in the wake of George Floyd’s killing at the hands of police officers, and the US officially entering a recession.

McLaughlin has also argued that the poll unfairly includes “questions on issues including race relations, not job creation, which could have biased the poll further,” though CNN’s survey does ask registered voters who would better handle the economy (Trump leads 51% to Biden’s 46%) and was conducted at the height of the Floyd protests.

Trump has regularly chafed at polls that do not reflect favorably on him while promoting ones that do. Last month, Trump bashed Fox News, a network he often touts and gives interviews to, for a telephone-conducted poll that showed him behind Biden by 8 points, and instead pointed to a CNN poll released earlier in the month where he was leading Biden in battleground states. That CNN poll, however, showed Biden had a 5-point lead over Trump among registered voters nationwide.

“Why doesn’t @FoxNews put up the CNBC POLL or the (believe it or not!) @CNN Poll? Hope Roger A is looking down and watching what has happened to this once beautiful creation!” Trump tweeted at the time, referring to the late Fox News founder Roger Ailes.

Trump has also credited CNN’s polling when it has suited him, as he did in December 2015 when he thanked several on-air reporters for their “very professional reporting of the new CNN Poll” that showed him ahead in the Iowa caucuses.

June 10, 2020
On the Argument from Reason: Evolution, Emergence & the Fallacy of Division
Next Post 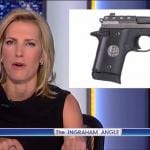