Raging Against the Machine

This is a random Friday post about a band that I got into as a teenager but with a very veneer sort of understanding. I got the angst and anger. Sort of. But not really.

Perhaps you will only dig this if you were a teenager in the 90s. Hey ho. 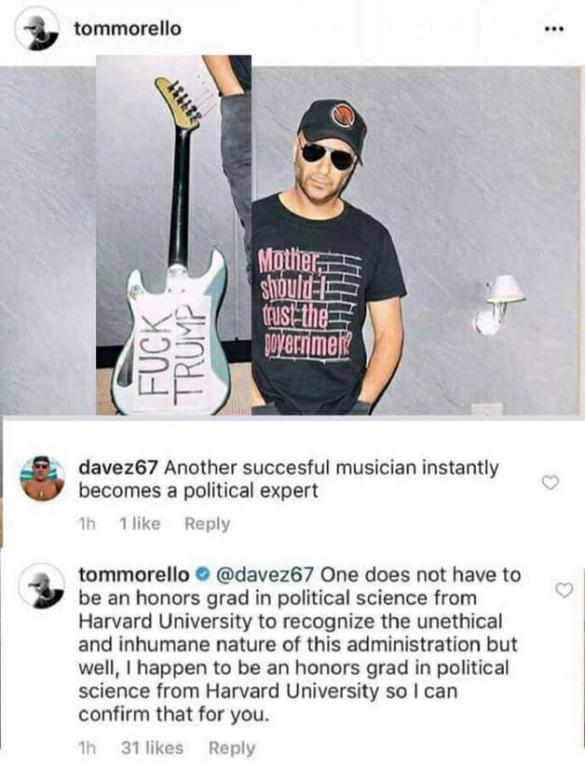 “Some of those that work forces are the same that burn crosses”.

I mean, listen to the very simple, forceful and repeated lyrics of one of their most famous songs (if you don’t like a bit of swearing, don’t):

Which was why it was hilarious that people have come out on Twitter to rage against Rage for being too political for jumping on the bandwagon. Ha!

One user addressed the band: “I use to be a fan until your political opinions come out. Music is my sanctuary and the last thing I want to hear is political b******t when i’m listening to music.”

“As far as i’m concerned you and Pink are completely done. Keep running your mouth and ruining your fan base.”

Tom Morello himself responded: “Scott!! What music of mine were you a fan of that DIDN’T contain “political BS”? I need to know so I can delete it from the catalog”.

I don’t get what you must be thinking when looking at their most iconic album cover: 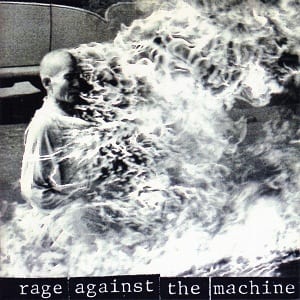 Are the songs about lost love and heartache?

Some of the replies to the tweet were awesome:

“The people angrily denouncing Rage Against the Machine for Tom Morello’s leftist politics is one of the more hilarious things I have ever seen on the internet. WHAT MACHINE DID YOU THINK THEY HAVE BEEN RAGING AGAINST FOR DECADES? THE ICE CREAM MACHINE? THE ATM? LAWNMOWERS?”

Another agreed: “What “Machine” did you think he was raging against? The dishwasher?” [source]

This satirical article exhibits the utter misunderstanding of who they are: “I Like Rage Against the Machine, but I Wish They Stayed out of Politics“. That’s pretty much their USP, as Morello states. It includes classic tongue-in cheekness such as this:

Hopefully with this latest hiatus they’ve been on, Rage Against the Machine has grown up. I don’t think they fully understand their audience if they think we want to be preached to about political issues. Just stand up there, play your fun message-free music, and keep politics out of it. We all will be better off if you just stay apolitical and Kick Out the Jams.

It’s like these people who really do kick off about them are still teenage versions of myself – angst against the institutions of the government because, you know, you’re young and angry, and then you later become some kind of white, right-wing libertarian who still loves to hear those guitar riffs whilst being utterly deaf, tone-deaf, to the political messages.

Conservatives: I don’t like that Rage Against the Machine has suddenly gotten all political and leftist

Now, where was I with the Argument from Reason…

[This is an excellent discussion about why this disconnect has happened:]

June 19, 2020 A Letter to our Leader
Recent Comments
0 | Leave a Comment
"Only so far as they bind themselves."
Michael Humanists Condemn Supreme Court’s Adoption Case ..."
""so here's a hypothetical: what if a large transwoman with nearly twice the reach of ..."
epeeist What Does It All Mean?
"Thanks."
Jonathan MS Pearce New Exodus Book Project Confirmed
"That's really kind of you to say so. Thank you."
Jonathan MS Pearce New Exodus Book Project Confirmed
Browse Our Archives
get the latest from
A Tippling Philosopher
Sign up for our newsletter
POPULAR AT PATHEOS Nonreligious
1