Debunking CosmicSkeptic Debunking Himself Debunking the Kalam. A Rebunking? Or Something…

Debunking CosmicSkeptic Debunking Himself Debunking the Kalam. A Rebunking? Or Something… July 10, 2020 Jonathan MS Pearce

Okay, this isn’t so much a debunking as a conversation or a use of Alex O’Connor’s (CosmicSkeptic) recent video as a stimulus for discussion. It’s a commentary of sorts. I’ve got a lot of time for O’Connor: his videos are excellent and he rightfully has a big following because he produces quality content with finesse and intellectual respect. His latest conversation with William Lane Craig himself concerning the Kalam Cosmological Argument was fantastic because he had many talking points that weren’t your run-of-the-mill pushbacks to Craig and the Kalam.

O’Connor initially produced a video against the Kalam a few years back and his recent one was to update his views and, with intellectual integrity, show where he was initially being naive or hasty in his criticisms.

My video takes this update and agrees in large part, but has a few bones of contention with a couple of areas, most notably with the use of “infinite” in describing God as the First Mover.

See what you think. am I right here?

This is the first of two videos in order to keep the videos at reasonable lengths.

July 9, 2020
England: Waiting for Humanist Weddings to Be a Thing
Next Post

July 12, 2020 Tucker Carlson's Chief Writer Resigns Over Racist and Sexist Comments
Recent Comments
0 | Leave a Comment
"We think the same way about you liberals screaming in ecstasy while an abortion doctor ..."
D.M.S. The Trial of Jesus
"So, religion then? There's an observation that communes work up to about 100 adults. After ..."
Jim Jones Here’s Why AOC Is a Political ..."
"Self, continuous self, subjectivity (in this context), consciousness. All the same things. I did not ..."
C Peterson Idealism Is More Parsimonious?
"Who owns your local police department? Who owns the roads?"
Artor Here’s Why AOC Is a Political ..."
Browse Our Archives
get the latest from
A Tippling Philosopher
Sign up for our newsletter
POPULAR AT PATHEOS Nonreligious
1 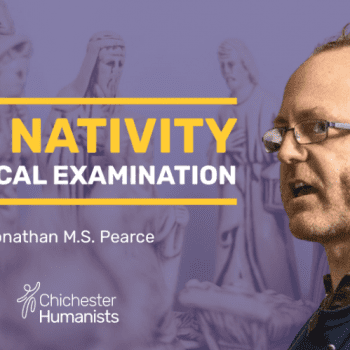 Nonreligious
My Chichester Humanists Nativity Talk Is Available for...
A Tippling Philosopher
TRENDING AT PATHEOS Nonreligious