In talking in my last post about persecution, my call is to try to be nuanced. Sadly, my interlocutor supposedly read the piece and concluded:

Nevertheless, we seem very shy about mentioning persecution of Christians in the world here in the West. I don’t think Johno ever actually accepted that it happens. With our liberal, secular worldview, we might be seen as letting the side down to admit that it does, or perhaps when you characterise a whole religion as hateful Southern Baptists and people who camp outside of abortion clinics, it’s hard to bring your mind around to large numbers of people who are suffering who belong to that group.

I don’t know why people a queasy about talking about persecution of Christians, I just know that they are….

…further to my point above, Johno seems to explicitly reject that it happens.

I am flabbergasted that he could read (I think he only skim read my efforts) my piece and conclude that I am denying Christian persecution actually happens. It’s a bizarre mind that could possibly take that from my article. I concluded:

What I would say is this:

Any other such claim, as we saw above, is simplistic, naive and essentially incoherent at best, disingenuously incorrect at worst.

But all that aside (I will come back to this last point), one thing that was mentioned in my piece and that I mentioned again in discussions with him elsewhere is the very topical subject of the persecution of the Uyghur Muslims by the Chinese authorities. Videos were shown on the news, that were validated by intelligence authorities, of Uyghur men being blindfolded and rounded up onto trains to be sent to concentration camps reminiscent of Holocaust activities. This together with the Uyghur women being sterilised.

My point today is perhaps one of education for some of my readers in pointing out that this might not be as clear-cut a case of religious persecution as we may think, though it is still persecution bordering on, perhaps, a form of genocide.

This could actually be catogorised as racial and cultural persecution of a group that happens to be Muslim. This is largely because there are two different groups of Muslims in China, the Uyghurs and the Hui, and the latter do not receive the same kind of abuse. So, it might seem, the persecution isn’t because they are Muslim but for other, varied reasons.

I’ll share some details from a 2014 article detailing the differences, from The Diplomat:

There are two major Muslim ethnic groups in China: the Hui and the Uyghurs. While these two ethnic communities may share the same god, their respective positions within Chinese society remain radically different.

The Uyghurs, who speak a Turkic language written with an Arabic script, are as distinct in appearance from the Han Chinese as Native Americans are from their Caucasian counterparts. Their population of around 8 million mostly resides in the Xinjiang Uyghur Autonomous Region, a vast province situated along the borders of several Central Asian countries in China’s northwestern frontier.

The Hui, estimated at around 11 million, can be found throughout China. Most, however, are concentrated within the Ningxia Hui Autonomous Region. They are unique in China as they represent the only one of the 56 officially designated nationality groups in China “for which religion…is the sole unifying criterion of identity.” In skin and blood, the Hui are little different from their Han brethren. For the vast majority of the Hui, Mandarin is a mother tongue, and besides refraining from pork and alcohol, they have much the same dietary preferences as the Han.

The most striking difference between the two groups though is their respective positions in relation to the Chinese government. Unlike the Hui, the Uyghurs face an alarming amount of state discrimination. “Under the guise of counterterrorism and ‘anti-separatism’ efforts, the government maintains a pervasive system of ethnic discrimination against Uighurs…and sharply curbs religious and cultural expression,” notes a 2013 Human Rights Watch report on China. It cites an “omnipresence of the secret police,” a “history of disappearances” and an “overtly politicized judiciary” as common components of the “atmosphere of fear among the Uighur population.” The Hui are not mentioned in the full-country report. The cause behind the gap in government treatment is twofold.

One reason is culture. Like the majority Han Chinese, the Uyghurs also have a strong attachment to their cultural practices and are deeply prideful of their culture’s long history. They have little desire to assimilate into Han society. Their reluctance to do so is met with reactions ranging from chauvinism to claims of ingratitude by the Han elite. Reciprocally, the Han inclination to patronize and discount the Uyghurs – referred to as “the barbarians” in dynastic times – as culturally inferior breeds resentment and frustration among Uyghurs.

The Hui on the other hand are the ideal religious minority for the Chinese government. They have largely assimilated into Han society, having adapted their Islamic practices to fit into the Confucian-influenced macroculture. Their mosques, a harmonious blend of traditional Chinese dynastic architecture with Islamic motifs, are the perfect manifestation of the Hui’s fluid assimilation.

Another aspect of the cultural dimension that affects the Uyghurs’ societal positioning is race. Racial discrimination pervades the Uyghur-Han relationship in China. Many of the Han feel uneasy towards the Uyghurs, believing them to be thieves and hotheads and in more recent years, religious fanatics. Part of this is because the Han are poor at distinguishing the differences between the Turkic minority groups. As a consequence, when crimes are committed by Tajiks, Kazakhs, Kyrgyz, Uzbeks or Tatars, Han will likely describe the wrongdoers to authorities as Uyghurs; suddenly nearly every non-Han crime taking place in China is committed by Uyghurs.

The effects of this stereotyping is evident in Urumqi, where Han and Uyghur numbers are nearly equal. Xinjiang’s provincial capital is a city divided. While the Han Chinese reside in the wealthier north, most of the Uyghurs stay in the less developed south. “The Han don’t come down here,” an American expat living in Urumqi tells me as we stroll through a Uyghur neighborhood. “They are too afraid.”

The Hui, however, mingle freely within both communities. Their command of Mandarin lends them legitimacy with the Han, while their Islamic faith makes them okay with the Uyghurs (though this isn’t to say that there haven’t been clashes). In contrast, many Uyghurs struggle with Mandarin, which only adds to the Han perception that they are an uncivilized, benighted people.

I advise continuing to read the original piece as it contains further interesting differences in terms of language and how the state approaches and depicts the two communities.

At the end of the day, you might argue that persecution is persecution and these are all semantic differences that make not a jot of difference. Perhaps. But, as ever in these sorts of discussions, knowledge is essential and definitions are key to accuracy.

It seems that when an out-group assimilate to become more like the in-group they will get less persecuted, less treated like an out-group. This is almost so obvious as to be taken for granted, but if you want to see this explicitly in action, this here with the Uyghurs is your case.

Arguably, the persecution of the Uyghurs is not religious persecution. As I said in my last piece:

That the out-group is the most persecuted, and enshrining universal and equitable morality into law to protect all minority groups in the world, in every country, is what we should be arguing for…

All persecution is about in-groups persecuting the out-group with all of their differences. Occasionally, the in-group aren’t the majority – take apartheid in South Africa. It is about power. You could, if you wanted, produce nested hierarchies: out-group –> cultural –> religious and so on, or change these around. Or not bother at all because what really matters in universal morality that enshrines equality for all, taking particular care for minorities who are almost always disenfranchised. From black communities and black in general in the US to Uyghurs, from Muslims in Europe, from Aborigines in Australia to ethnic-tribal groups variously around Africa, we have group dynamics causing immense suffering.

Whether it be religious, cultural, racial, classist, or whatever, it is about difference and punishing those on account of their differences.

Yes, sometimes this might also be confused by scenarios of religious content whereby God has supposedly decreed that people who don’t do X, or who are members of F community should be, in the eyes of God, seen as less than and persecuted. It’s God’s work, after all. This eventually looks like out-group persecution rubber-stamped by God.

I wonder if any readers here have been actively involved in some kind of cultural persecution? 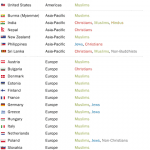 July 19, 2020
Assessing the Claim that "Christians Are the Most Persecuted Group"
Next Post 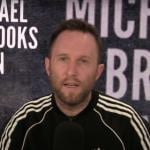 July 21, 2020 RIP Michael Brooks
Recent Comments
0 | Leave a Comment
Browse Our Archives
get the latest from
A Tippling Philosopher
Sign up for our newsletter
POPULAR AT PATHEOS Nonreligious
1

Nonreligious
God Cannot Be Perfect Because Intrinsic Perfection Does...
A Tippling Philosopher