Reporter: Will you commit to making sure that is a peaceful transferral of power after the election?

Trump: Well, we’re gonna have to see what happens. You know that I’ve been complaining very strongly about the ballots; and the ballots are a disaster…

Reporter: I understand that but people are rioting. Do you commit to making sure that there is a peaceful transferral of power?

Trump: Get rid of the ballots and you will have… a very peaceful… There won’t be a transfer, frankly, there will be a continuation…

I am done with being polite. I’m done with listening to absolutely terrible defences of an egregious man. I am tired of listening to Lindsey Graham say that he can be held to his words and then wriggling out of them. Whilst we are on that subject, his excuse that he doesn’t have to adhere to his previous comments were: 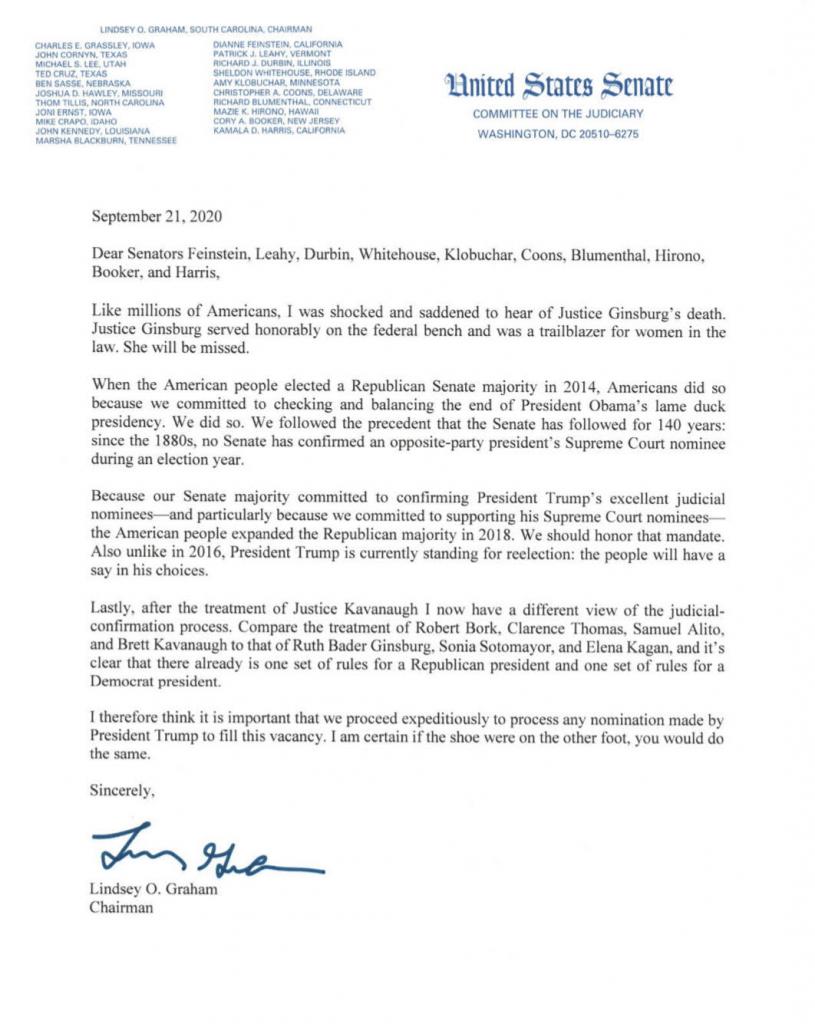 I just want to show you how absolutely disingenuous this excuse for not being held to account in the way he demanded to be held to account is that the excuse he gives – “…after the treatment of Justice Kavanaugh I now have a different view of the judicial-confirmation process” – is a lie. It is a lie because that process took place BEFORE his initial comments about SCOTUS nominations that he asked to be held to account for! THAT happened in 2018. In fact, in the interview, he even already refers to Brett Kavanaugh:

And here he discusses the nomination process:

Hoist by his own petard.

Here is an open liar, on the record making an argument:

There is no way that Republicans can harmonise this other than to say, “Meh, more fool you for believing us. Power at any cost.”

That would be honest as that is what is happening. You can’t argue with these words, and his excuse is a lie – it’s nonsense – because these comments came after – were in response to – the very event that supposedly changed his mind.

So, Republicans, you are endorsing a man who is seeking to take away, unevidenced, the very mechanics of democracy that would see him in every likelihood lose the election, so that he can win. He is wanting to cheat to win. And failing that, he is not ruling out using force in order to achieve “continuation” of power. It’s why he’s desperate to get the SCOTUS nominee put in place because he knows the election will be challenged in court.

I wonder how much of his campaign funds Trump is saving for legal defenses after he loses the election. The reason why he is so desperate to win reelection is that he will be hammered by countless lawsuits as soon as he loses. He is protected only on account of being POTUS. That’s why he also so desperate to extend his right to rule beyond two terms. It’s self-preservation. And that’s why he is willing to cheat to win.

He’s just putting off those impending prison sentences until he can stack the courts.

What a terrible human, a proper dictator-wannabe.

September 24, 2020 Zero Sum Game
Recent Comments
0 | Leave a Comment
Browse Our Archives
get the latest from
A Tippling Philosopher
Sign up for our newsletter
POPULAR AT PATHEOS Nonreligious
1