Humans: Abandoned by God, Made Obsolete by AI

I was having a social media conversation with an old schoolfriend, MG, where he came to a fascinating conclusion; the chat went like this:

MG: I’m a fervent atheist. In fact an anti-theist. But I have a counterpoint to the atheist argument which is strong….

My counterpoint is less a refute of the atheist position, more an explanation of the current status-quo. That is, few can be in any doubt nowadays that organised religion is daft, but that has only been a position that we have had the luxury of taking for the past 100 years. Prior to that the relative poverty, disease, childhood death rate and general very-low quality of life for the masses demanded a promise of something else, something bigger, something better, just to offer hope. Otherwise, it was just TB, syphilis, kids dying, pain, cold, starvation and death. In addition, religion served a useful purpose of standardising a set of basic human values, when things were still up for debate. You want to lower the murder rate? Telling people that ‘murder is wrong’ is way less powerful than telling people that “it’s written in the Bible that murder is wrong” with the added threat of going to hell if you didn’t follow the rules.

So my counterpoint is really – theism makes no sense now, but for two millennia it was absolutely necessary to offer hope to the masses and to standardise a basic set of human principles. For the first time in history we have central heating, antibiotics, healthy children and safety – and so, of course it’s only a matter of time before organised religion evaporates – it’s served its purpose. To try and rush it along by being too fervently atheist is like laughing at your younger sibling because they still believe in Father Christmas.

JP: Absolutely. This is a functional account of religion as would be explained by evolution. It is no surprise that the countries with the greatest security, education and welfare have the lowest levels of religiosity. There are several reasons that God believed would happen, including mortality salience (terror management theory and the fear of death), moral attribution and explanation of the unknown.

“The cause of lightning was once thought to be God’s wrath, but turned out to be the unintelligent outcome of mindless natural forces. We once thought an intelligent being must have arranged and maintained the amazingly ordered motions of the solar system, but now we know it’s all the inevitable outcome of mindless natural forces. Disease was once thought to be the mischief of supernatural demons, but now we know that tiny, unintelligent organisms are the cause, which reproduce and infect us according to mindless natural forces. In case after case, without exception, the trend has been to find that purely natural causes underlie any phenomena. Not once has the cause of anything turned out to really be God’s wrath or intelligent meddling, or demonic mischief, or anything supernatural at all. The collective weight of these observations is enormous: supernaturalism has been tested at least a million times and has always lost; naturalism has been tested at least a million times and has always won. A horse that runs a million races and never loses is about to run yet another race with a horse that has lost every single one of the million races it has run. Which horse should we bet on? The answer is obvious.” [Carrier]

MG: But my argument is not about who wins and who loses. It’s about why religion exists in the first place. Your arguments, whilst entirely correct, miss the point – that religious beliefs were never meant to be scientifically defensible – but to offer succour to those in desperate circumstances. Absolute belief in a God was only necessary to maintain the illusion.

Would you really want to deconstruct God and religion in front of your middle-ages ancestors, as they cradled the body of another child, dead of causes unknown?

JP: Absolutely. So in a post-God World, atheism needs to be able to provide the functions that religion once did. That’s its challenge, which is a problem since it isn’t a very empty ideal. It’s just a belief that God doesn’t exist. Everything else is philosophy.

Some years back, I consulted on a book that set out exactly this. [Everybody is Wrong About God – UK]

It’s something that will take time and, as you imply, it will die out when it is not needed. But, we need to think carefully about what we replace it with.

Product Description
A call to action to address people’s psychological and social motives for a belief in God, rather than debate the existence of God

With every argument for theism long since discredited, the result is that atheism has become little more than the noises reasonable people make in the presence of unjustified religious beliefs. Thus, engaging in interminable debate with religious believers about the existence of God has become exactly the wrong way for nonbelievers to try to deal with misguided–and often dangerous–belief in a higher power. The key, author James Lindsay argues, is to stop that particular conversation. He demonstrates that whenever people say they believe in “God,” they are really telling us that they have certain psychological and social needs that they do not know how to meet. Lindsay then provides more productive avenues of discussion and action. Once nonbelievers understand this simple point, and drop the very label of atheist, will they be able to change the way we all think about, talk about, and act upon the troublesome notion called “God.”

Review
” Everybody Is Wrong About God is a manifesto; a call to abandon the battle over God, which has already been won and which some are still far too invested in fighting, and move on to the main front in the struggle for the future of all sentient beings . . . . everyone who cares about secularism and humanism should read this book and discuss it vigorously.” –Ryan J. Bell, Year Without God

“A very thought-provoking book, sure to be controversial. I love it!” –John W. Loftus, author, How to Defend the Christian Faith

“There is a new era to come, a new conversation in town, and it doesn’t involve ‘God.’ Let Lindsay’s book be the erudite ice-breaker.” –Jonathan MS Pearce, author, The Little Book of Unholy Questions

So the question is: what does God do? Okay, God does not exist, so how do we do this without God?

Sometimes it’s a tough sell because with atheism when you die you become worm food. But, for Christians, you go to heaven and live for eternity in utmost pleasure. You can also bribe nonbelievers by saying that they will go to hell in utmost torture and displeasure.

This way you start looking at mortality salience and whether a fear of death and belief in heaven gives you a greater well-being than not believing it.

Study into who is least afraid of death

MG: That James Lindsay book sounds exactly like what I’m getting at. More energy on discussing what’s next, less on battering the believers with facts/science. Although I hope it contains an acknowledgement of why religion was necessary in the first place. These weren’t just fairy-tales that happened to capture the imagination.

Thanks for the chat!

Interesting that this challenge is going to almost perfectly overlap chronologically with our A.I. challenges … simultaneously abandoned by God and made obsolete by our own creations. At least if we’d kept God, we could argue that he only loved his own creations, so machines were outside of his interests.

There’s a huge need for a single unifying solution to both these challenges.

It is that final comment in bold that I find fascinating. It is as though we have outlived our God-needs (Creator) in the same way AI (if The Terminator is to be believed) will outlive its Creators.

There’s something in that dynamic that interests me. 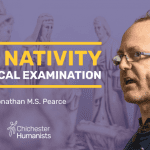 December 11, 2020 Two More Nativity Talks This Week
Recent Comments
0 | Leave a Comment
"Well, none of us created secularism. So if a city designates an area for Xmas/winter ..."
Robert Baden Religious Rivals Unite in Celebration Over ..."
"Well, I dunno... they could actually look the the effects of the legislation...NAH!I kid."
Anri Lies. Liars and Truthtellers
"Amazing, then, that you're more dedicated to running a courtroom correctly than the people who ..."
Anri Lies. Liars and Truthtellers
"He had no case, he was rightly prevented from harassing other students."
WMDKitty -- A Work In Progress Religious Rivals Unite in Celebration Over ..."
Browse Our Archives
get the latest from
A Tippling Philosopher
Sign up for our newsletter
POPULAR AT PATHEOS Nonreligious
1