I recently had a discussion with C Peterson here about his understanding of quantum physics in the context of whether there is a deterministic framework underpinning reality, as this is part of a chapter for a book of my own previous and original writing, title as yet decided upon. Now, QM is a vociferously argued topic and there are deterministic theories of QM (de Broglie-Bohm, Many Worlds Interpretation etc.) that might stand against CP’s claims.

Here is what he had to say. I would be interested if other people with an interest or expertise in this topic agree or disagree and I will excerpt my particular claims in a future piece.

In fact, quantum properties project to the macroscopic. QM tells us that a chair *can* become a stone. It’s just not a terribly likely event. A molecule of a wood protein might have some probability of becoming a molecule of some mineral in a reasonable time, perhaps less than the age of the Universe. Now multiply that probability by the countless trillions of molecules that make up a chair, and it’s unlikely we’ll see such a transition in any time period that we can readily grasp. But the *possibility* remains… so any arguments using QM have to allow for that. Nature does not make it *impossible* for a chair to become a stone, just very, very unlikely.

With regard to determinism here: I’ve observed that the word gets used in a couple of different ways, and that seems to create confusion or ambiguity in discussions on your and other forums.

Your treatment of determinism seems to be that we can use the term for an event that cannot be predicted, but that can be accurately described statistically. We do not know when a particle will decay, but we know that a particle has a 50% chance of decaying in some specific period of time. And we can observe that very precisely given enough particles and enough time. And this is certainly true, and I think it is an important feature of nature. As you say, nature isn’t random. In this case (and all others of a similar sort) it is pretty clear that nature is operating according to a very well defined law, which does not vary.

That said, I don’t think it is necessarily reasonable to call that kind of event “deterministic”. It is not random, but it is not predictable. It is _constrained_ within some space- maybe finite, maybe infinite. That is a distinction that may have profound consequences for any understanding of free will, agency, whatever we want to call this property of mind. Personally, I’ve yet to hear a sufficiently good definition of free will to be comfortable making an assessment of its existence or non-existence. But I do know enough about network theory (which I think will prove to be the primary tool for understanding mind), as well as some actual experience with complex systems of the sort commonly referred to as AIs, to believe that no mind can be regarded as operating deterministically. That no knowledge of the state of a mind at one time will allow for a perfect prediction of its state sometime later. Indeed, I consider this assertion to be about as close to fact as anything can be.

To be clear, I do not claim this type of indeterminacy implies free will. Only that it argues powerfully against any claim that free will can’t exist because the mind is deterministic. That latter claim is, I think, demonstrably false. (I have seen mathematical proofs of the fundamental indeterminacy of even simple networks where there is some stochastic input to the nodes- which is true for AIs and is true for neuron-based brains.) This is where the role of quantum effects gets interesting, and relevant. Complex networks have two common failure modes. They can collapse to static stability (i.e they are frozen in one state), or they can go out of control, into chaotic operation. It turns out that introducing a little randomness is integral to proper stable operation. In an AI, this is done by deliberately adding a small random value to some feedbacks. In the brain, it is a natural consequence of microscopic processes which are randomized by quantum effects. For example, when a neurotransmitter is released at a synapse, the consequence (e.g. an ion channel opening) depends upon how a small number of individual molecules diffuse, which depends upon truly random factors like Brownian motion… which is moderated by quantum effects.

Obviously, a healthy human brain is stable in its operation. It does not fall into a static state, and it is not chaotic. It takes in a variety of inputs, including internally generated ones like memory states, and produces outputs. And those outputs are far from random. The mind is constrained. But it is almost certainly not perfectly predictable. If we could create two absolutely identical brains (cf. the transporter problem), and feed them absolutely identical inputs, their outputs would rapidly diverge from each other. Neither would result in completely predictable behavior. Which is not to say that we couldn’t make statistically reliable predictions much of the time. Predictions that might not be perfect, but which would be close. That somebody whose brain we have modeled pretty accurately isn’t going to stop in the middle of a bridge and jump, for instance. Or that they are. But always there is the possibility of a wrong prediction.

Is that deterministic? I would say no. Maybe you would view it differently. But my take is that it leaves a big opening for the possibility of free will, or at least makes it impossible to use this argument to categorically argue against free will. For me, that’s a question that’s going to have to wait a few more years for the network theorists and AI modelers to advance our understanding of mind just a little bit more. For now, I think the safest, most intellectually honest position to take is that enough of our behavior is dictated by factors outside our control that we need to take seriously how we handle moral “failures”, regardless of whether there is some degree of free will that actually exists. That is, we don’t have to totally exclude free will as a possibility to make most of the same arguments we use when we assume it doesn’t.

January 14, 2021
Taking on that SOB in Catholic News
Next Post 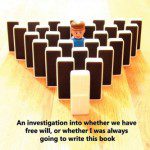