All the Options to Explain Suffering

All the Options to Explain Suffering January 18, 2021 Jonathan MS Pearce

Quality commenter here, 3lemenope, recently provided us with his idea of the range of reasons that can be given to explain suffering in light of OmniGod:

That’s it. None of the options speak well of an omni-anything. It’s a good thing, I suppose, that the Bible doesn’t even headfake towards omnibullshit. YHWH is just SuperZeus; once that sinks in, the whole narrative comes together. And we’re left with a deity unworthy of worship even if it did manage to exist.

To which Luke Breuer replied:

Nothing else seems all that effective in getting us to care about each other. And if we cared about reducing suffering as much as the intensity of your argument suggests, I think we’d drive it through the floor. But in fact, we could give zero ‮skcuf‬ about most suffering around the world. Curious that we turn around and blame God for not doing more about suffering … (Yes, yes, convert that to the subjunctive.)

This ends up being a sneaky argument in favor of atheism.

The fourth option on the list, the one that theists who believe in a benevolent god really can’t reach for, is

4. Suffering is a randomly distributed contingency of being

Even the poetry of the Bible gives a nod here and there to this notion, what with the rain falling on the just and unjust alike, but it is generally incompatible with the idea that suffering is intentional and intended, and morally purposeful.

So the options are:

On 3.: This is arguably what 3lemeope’s number 4. was above. I think it still fits into the overall category here, but this can possibly be subdivided.

Are there any other options?

Talking of OmniGod, I have recently re-released a bunch of my previous writing on the topic in my reasonably priced paperback and ebook The Problem with “God”: Classical Theism under the Spotlight [UK]. 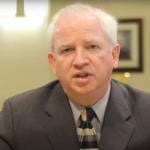 January 19, 2021 What’s The Deal With John Eastman?
Recent Comments
0 | Leave a Comment
Browse Our Archives
get the latest from
A Tippling Philosopher
Sign up for our newsletter
POPULAR AT PATHEOS Nonreligious
1