Contradictions in the Resurrection of Jesus Accounts

I have recently been in contact with David Austin, in Australia, who has a keen interest in the Resurrection of Jesus and the Gospel accounts thereof. This is his comprehensive offering: 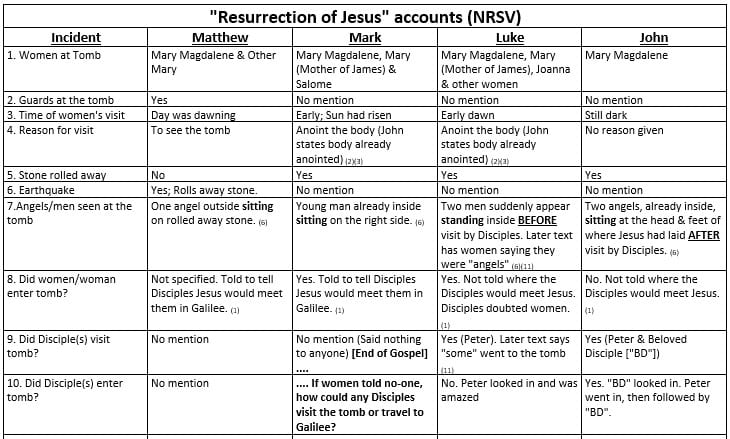 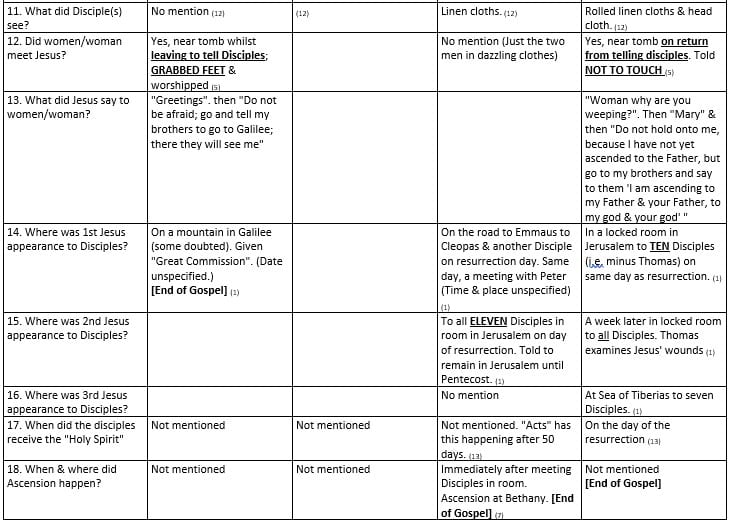 We have no “Originals” of any of the NT documents, only copies of copies with many differences. Our earliest complete books date to around the 4th Century. Earlier than this we have just fragments & part manuscripts. It is generally agreed that Paul was the earliest writer in the NT (c. 50 CE, approx 20 years after the crucifixion). Paul has no mention of an empty tomb; Just Jesus was “buried”. Mark has the first mention of a tomb (written c.70 CE). Normal practice with crucified victims was for their bodies to rot on the cross, and then thrown into a mass grave. It was unusual for them to receive a dignified burial, especially as Pilate was known to have unfavourable attitude towards the Jews.

According to Paul, if the Resurrection had not occurred, then Christians’ faith is in vain. One would, therefore, expect the Resurrection to be the best corroborated event in the NT, but, as you can see, in the above chart, this is NOT the case. If there are contradictions, this means at least one account  (& maybe more) is incorrect. If a text can be incorrect on one point, how many other events were recorded incorrectly? We have no extra-biblical contemporary documents that confirm any events in the Gospels. The four Gospels are anonymous; The “authorship” of these writings was a 2nd Century addition and was merely speculation by the early Church. The gospels were written in Greek, but it is generally agreed that Jesus & the Disciples spoke Aramaic and were “unlettered”.

It is widely believed that Matthew & Luke share a lot Mark’s material. The original manuscripts of Mark end at Chapter 16 verse 8 (Frightened women run from the tomb and tell no-one).

Luke & John contradict Matthew. Luke has two Jesus meetings with the Disciples, prior to a locked room meeting, (ie. With two Disciples on the road to Emmaus, and a meeting with Peter {time & location unspecified}) followed by a meeting with all Eleven Disciples in a room in Jerusalem. At this meeting, Jesus specifically tells them NOT to leave Jerusalem until “clothed in power from on high” (ie Pentecost). No 2nd meeting in Jerusalem or Galilee meeting.

Unlike Luke, John has the 1st sighting of Jesus by Ten Disciples in a locked room in Jerusalem, followed by two more appearances to them; 2nd in Jerusalem to Eleven and 3rd at the Sea of Tiberias to seven (This appearance specifically noted as the 3rd, hence NO prior visit to Galilee, “Road to Emmaus” or separate meeting with Peter). 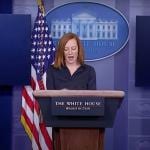 Nonreligious
Part 2 of Us Deconstructing the Resurrection
A Tippling Philosopher